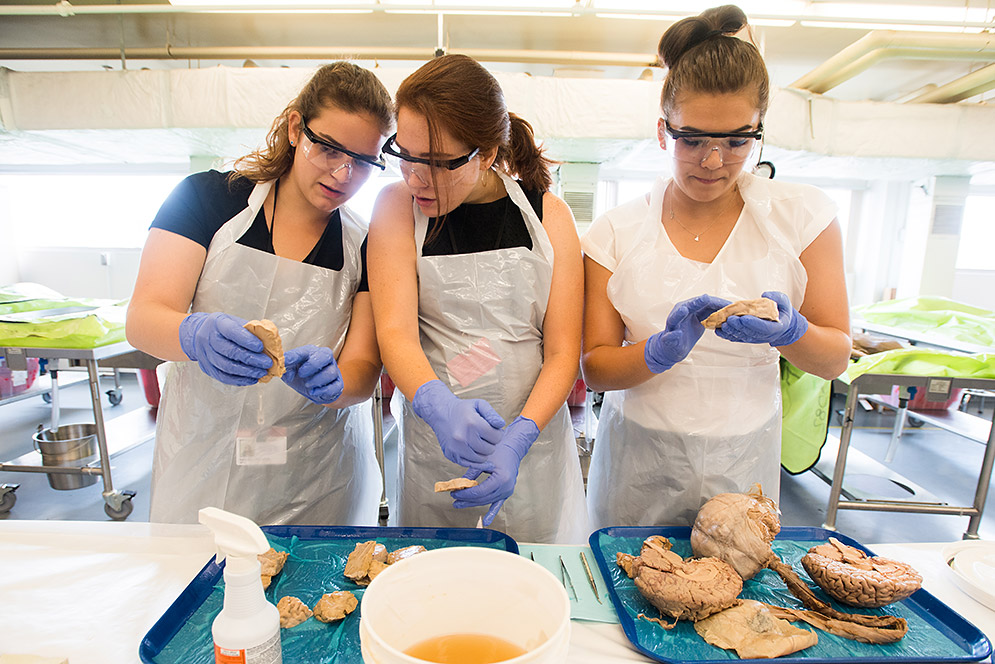 University of Michigan senior Rachel Feltman (from left), Colgate senior Courtney Dunphy, and University of Illinois at Urbana-Champaign junior Madeline McDevitt with the cadaver brains that have been donated to MED.

From their looks of cheerful expectation, you might think the eight undergraduates gathered around a U-shaped table in the BU School of Medicine anatomy lab are waiting to see a movie or a band. Except the next thing they do is don lab aprons, gloves, and safety glasses.

Then neuroanatomy instructor Joseph Goodliffe, a MED postdoctoral researcher, brings out the brains.

“Try to identify some of those structures we were discussing in class earlier,” says Goodliffe (MED’16) as he lifts several white plastic buckets onto the table.

Inside, floating in a preservative solution, are cadaver brains that have been donated to the anatomy lab, most of them already cut in half along the median, providing a nice clear cross section for the students searching out structures such as the corpus callosum, hypothalamus, and caudate. The students speak with a mix of awe and seriousness, but no one seems intimidated. It’s not their first time, after all.

“That one still has the spinal cord attached,” one says, nodding toward a nearby bucket. “That’s pretty intense.”

Welcome to the new Summer Program in Neuroscience (SPIN), which gives high-achieving undergraduates from colleges and universities around the country a head start in the subject, offering experiences that they wouldn’t normally get until grad school. 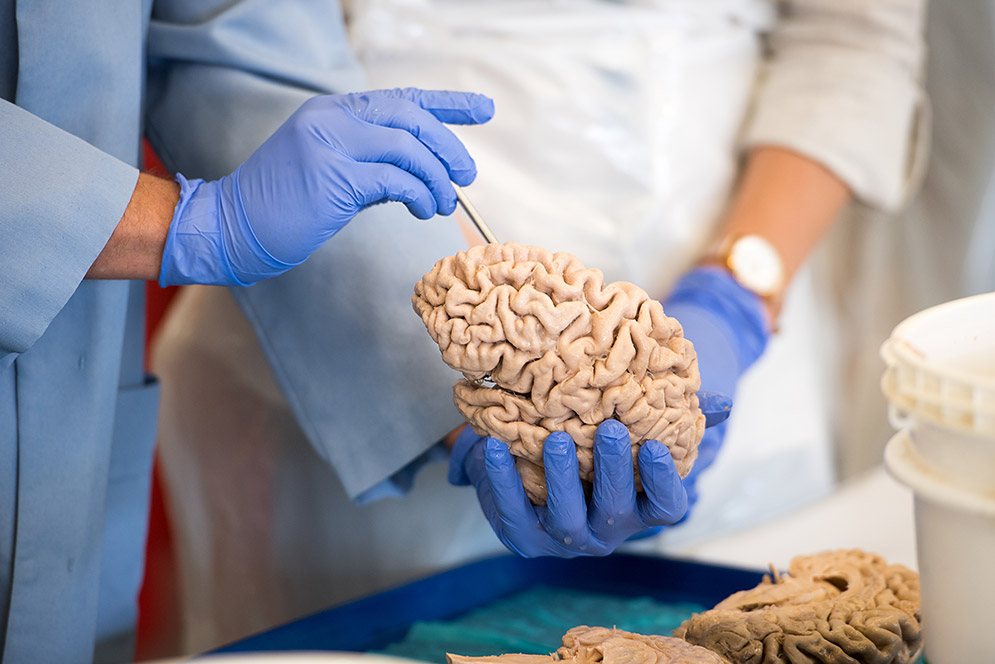 SPIN, the Summer Program in Neuroscience, is an eight-week course for undergraduates to integrate neuroscience research, hands-on teaching of human neuroanatomy, and clinical neurosurgery. It allows them experiences they otherwise wouldn’t have until graduate school.

The program has three components:

The students certainly agree about the “exciting” part.

Boston native Joy Yang is a rising junior at Emory University, studying neuroscience and behavioral biology. She plans to attend medical school, and says she never worried about her ability to handle the operating room. “I was open-mouthed the whole time. It’s such a surreal experience. You’re watching someone be cut open and helped and saved. I liked the blood. It was pretty cool. I watch a lot of gruesome TV shows. I was ready.”

“This has been the first real clinical experience I’ve had,” says Rachel Feltman, from Long Island, a University of Michigan rising senior studying for a BS in biopsychology, cognition, and neuroscience. “I’ve worked in a doctor’s office, but it was just at the front desk.”

Feltman says her first experience following Boston Medical Center residents as they were caring for a postsurgical patient with a serious head trauma was “very overwhelming.” As she prepared to attend a surgery the next morning, she called her mother, acknowledging that she didn’t know if she could handle it. To her relief, the surgery was canceled. However, she says now, the experience of waiting in the operating room for an hour before the cancellation gave her a level of confidence that helped her get through the next surgery.

“Your brain controls everything you do,” she says. “I’ve learned about it in lectures and in books and we’ve been working with the cadaver brains, but just seeing it pulsating and knowing blood was flowing through it was just incredible.”

Feltman, who dropped a study-abroad trip to Copenhagen to take the summer course, says SPIN has confirmed her commitment to a career in neurology or psychiatry. She will apply to medical school after a gap year. 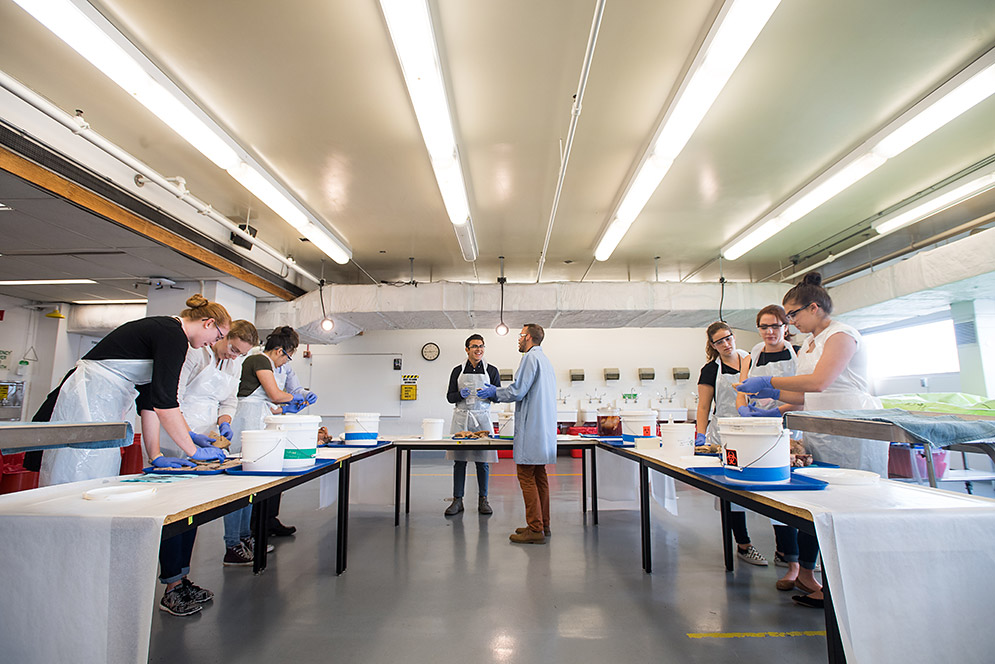 Undergraduates from across the country and instructor Joseph Goodliffe (MED’16) (center, in blue coat) study the anatomy of the brain in a MED lab.

Goodliffe has taught medical students and grad students, but this is his first time teaching undergraduates. That meant adjusting some of the content, which he says he doesn’t mind. “They’re just so enthusiastic and so excited to be here,” he says. “It’s a great energy level that they bring, and they’re learning neuroanatomy at the same level and pace we teach the med students.”

Holsapple ran a pilot program last year with two students from Drake University, his undergraduate alma mater. This year there were more than 100 applications for 8 slots, the small number constrained by the need to find a lab mentor for each student and to fit them all into clinical and operating rooms. He hopes to find ways to modestly expand the program next year.

He says SPIN benefits MED as well as the students. “As far as we know, this is the only program of its type,” he says. “It brings attention to BU as being innovative in the educational space, and it brings great students from all over the country to work in BU labs. It’s a good recruitment tool.”

Some SPIN students have already expressed interest in returning to BU for graduate studies or for medical school. And the program’s informal lunch speakers have included faculty offering advice about the medical school application process.

At the beginning of the eight weeks, he gave each student a blank lab notebook and told them they should write down anything they see or hear that they don’t understand. During the Tuesday morning didactic sessions with staff, time is always set aside for them to ask questions about those things.

“That inculcates a culture of inquiry and openness about questions,” Holsapple says, “of not being embarrassed to admit you don’t know something, which is the first step to knowing something.”