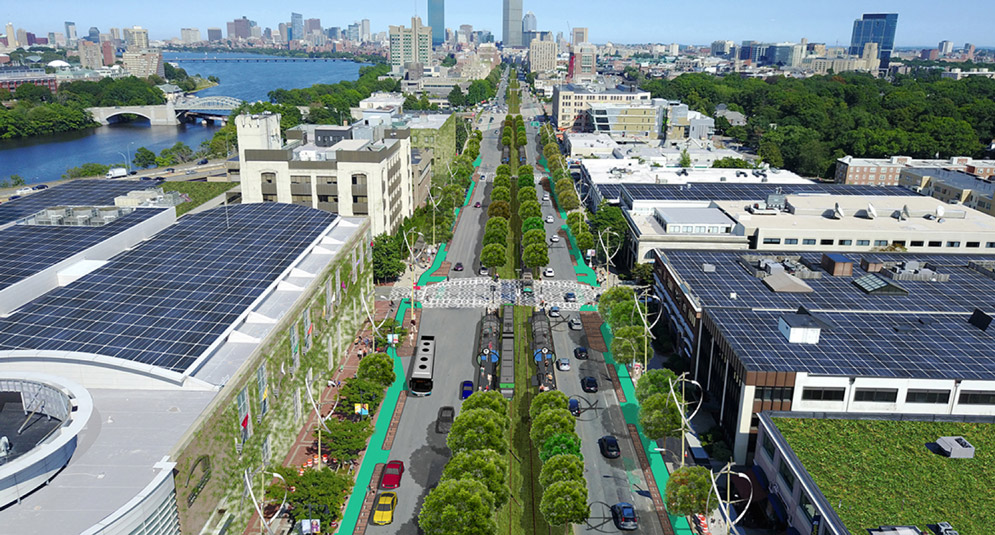 The Boston University Board of Trustees approved a Climate Action Plan on Thursday that will dramatically cut greenhouse gas emissions across both the Charles River Campus and the Medical Campus and fund broad infrastructure improvements in preparation for flooding or heat surges in the coming decades.

The board voted overwhelmingly to adopt the plan, which includes capital improvements estimated to cost about $141 million over 10 years. The plan is the result of a yearlong analysis by the University’s Climate Action Task Force, an 18-member group of faculty, staff, and students.

“Today the Board of Trustees voted that Boston University commit to doing its part in mitigating the impact of anthropogenic climate change and to begin to prepare our campuses for the effects of global temperature increases,” Robert A. Brown, University president, said after the vote. “The work of the Task Force has given us a framework for moving forward with these important efforts.”

Scientists agree that reducing energy consumption is the key to mitigating climate change.

The plan’s centerpiece is the reduction of carbon emissions on the campuses to zero by 2040, a decade ahead of a similar effort by the city of Boston. Direct emissions include pollution from the fuel the University burns to heat and cool the campuses, electricity and steam it purchases, and the exhaust from the University’s vehicle fleet.

Many of the changes involve updating BU heating and cooling systems to make them more energy-efficient. To reduce the cost of the University’s electrical demand, the plan recommends purchasing power from renewable wind and solar sources.

The task force, convened by Brown in September 2016, was asked to create a strategy to help address the threats caused by extreme weather patterns and the increased likelihood of problems related to flooding and heat waves on the campuses.

The plan presented to the board outlined three courses of action, titled as BU GOOD, BU BETTER, and BU BOLD. The task force specifically recommended the BU BOLD plan because it offered the most aggressive timeline for the changes.

Although the task force report estimates $141 million over 10 years, new costs will be incurred after that. But the report predicts that the financial benefits of its earlier improvements could cover those costs.

Task force chair Anthony Janetos, Frederick S. Pardee Professor, director of the Frederick S. Pardee Center for the Study of the Longer-Range Future, and a College of Arts & Sciences professor of earth and environment, said the timing is right to switch to renewable resources. Increasing competition in that sector has brought down market prices, and costs are even lower than they were a year ago when the task force began its work.

“This is a sweet spot that we’re in,” Janetos said, “and we’re positioned to take advantage of it.”

Task force member and BU Sustainability director Dennis Carlberg said the plan also includes a recommendation to create an academic Initiative on Climate Change and Sustainability, which would study ways to expand research opportunities on climate change and incorporate it into BU’s broader curriculum.

“All of our undergraduate students should be touched by this effort,” Carlberg said. “It’s going to take some work. But this is a great opportunity to develop courses and use the campus as a living laboratory.” 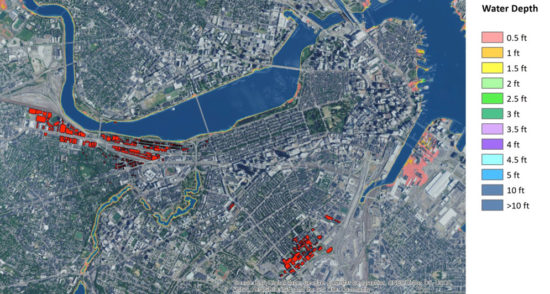 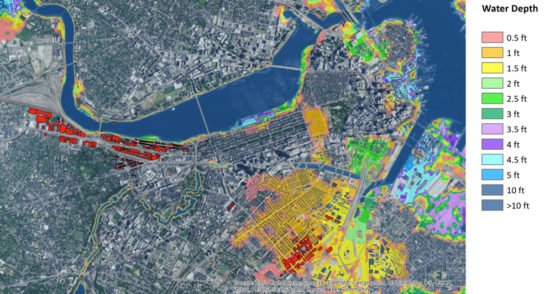 These illustrations show water levels during a one-in-100-year flooding event in Boston today (top) and in 2070 (bottom). The BU campuses are highlighted in red. The data come from the Woods Hole Group and are based on climate projections from the Boston Research Advisory Group, a team of the region’s top climate scientists. Mapping by Brett Sinica (GRS’18)

The plan also proposes a separate in-depth assessment of weather-related vulnerabilities at the BU Medical Campus, which sits in a low-lying area that’s extremely susceptible to flooding. The task force findings show that in the event of a one-in-100-year storm, the campus area could be a foot or more underwater by 2070.

The plan did not make recommendations about ways to curb indirect greenhouse gas emissions from faculty, staff, and student travel, University purchasing, or other transportation on campus. Those emissions are more difficult to quantify and are currently under study, Carlberg said, and for now, the effort means the University must lower its energy consumption 31 percent across the next 14 years.

“That’s aggressive, that’s bold,” he said. “This is critical work.”