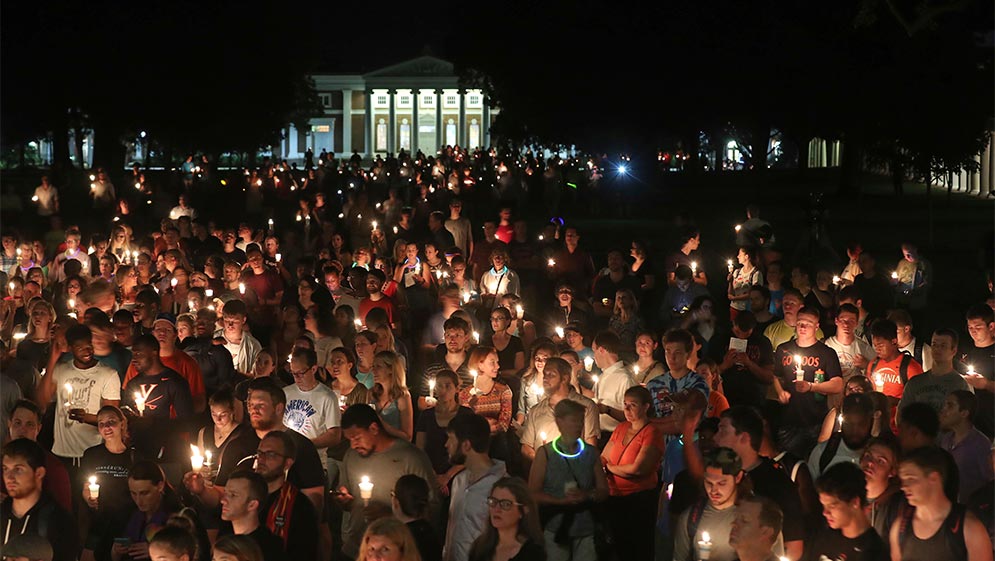 Hundreds gathered on the University of Virginia campus for a candlelight vigil against hate and violence on August 16, days after Charlottesville erupted in chaos during a white nationalist rally. Photo courtesy Andrew Shurtleff/The Daily Progress via AP

In the wake of last weekend’s violent demonstration by white nationalists in Charlottesville, Virginia, and in advance of a “free speech” rally planned for this Saturday on Boston Common, Robert A. Brown, president of Boston University, sent the statement below to the Boston University community on Thursday.

As has happened too often in recent years and months, our nation has been shaken by an act of violence—this time the fatal motor vehicle attack on counter-protesters at the demonstration in Charlottesville. We mourn the tragic loss of life and deplore the attack and the hateful, explicitly racist and anti-Semitic rhetoric that created the environment in which it was perpetrated.

As we seek in our democracy—and our academic community—to appreciate and understand difference, we speak of tolerance and the fundamental importance of free speech and respect for diverse points of view. But tolerance doesn’t necessarily imply or entail acceptance or approval. Palpably evil acts, such as occurred in Charlottesville, invite the challenging question about what is and is not tolerable or morally acceptable in speech and accompanying deeds. It is clear to me, and I believe it a view that is broadly shared in our community, that a claim of inherent racial or ethnic superiority is abhorrent. We must, I believe, explicitly denounce white supremacist and neo-Nazi groups that make such claims.

The obligation of our community must be to hold fast to the values that are in our Boston University DNA. As we participate in broader conversations in our society, we should seek to set a standard of civility and generosity of spirit in discourse that perhaps over time will be an illuminating counterpoint to the hate speech that threatens the very fabric of our republic.

In a time when many individuals are using language in ways intended to provoke and divide, it is almost natural to wish to limit speech. The success of Boston University in fulfilling its vital mission in our society depends on freedom of inquiry and speech—even when that speech is objectionable to many.

We are likely to be tested again, either by rallies, such as the one that will occur this Saturday in Boston, or by provocative speakers or writings. I encourage members of our community to show that the values of our University and the principles of the Constitution are an effective counterweight to the behavior of a few who would seek to divide us and our nation.

There are 16 comments on BU President Responds to Charlottesville Violence