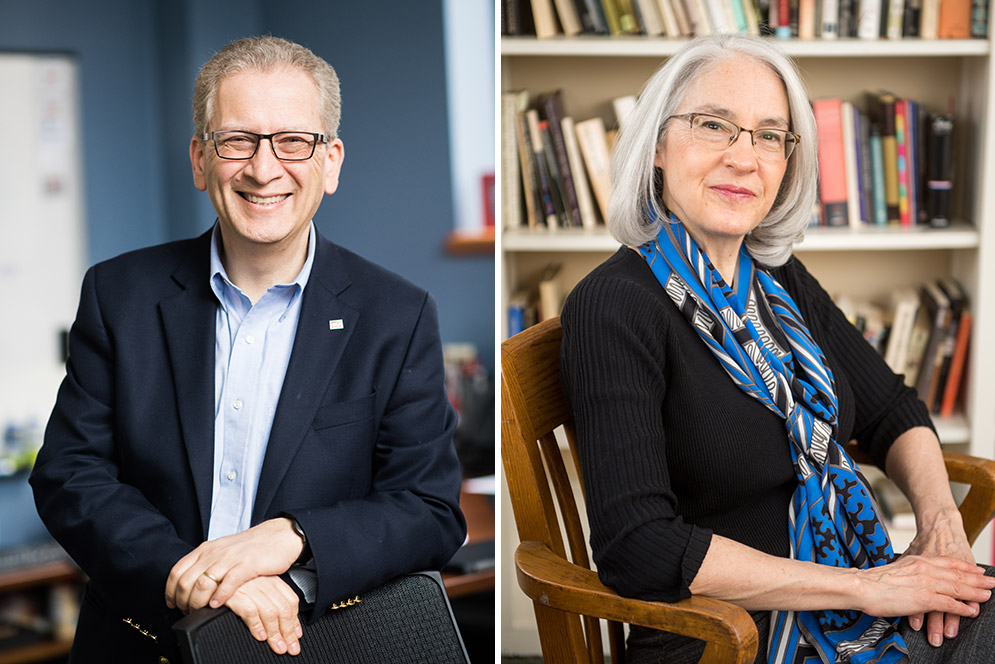 Azer Bestavros and Bonnie Costello are the newest William Fairfield Warren Distinguished Professors. Both College of Arts & Sciences professors, Bestavros, in computer science, and Costello, in English, are recipients of the highest honor bestowed by the University on senior faculty members actively involved in research, scholarship, teaching, and University civic life. The appointments were announced Tuesday by President Robert A. Brown, who notified Bestavros and Costello personally.

“Professors Bestavros and Costello have followed different paths, but both have arrived at the same place: they are renowned in their academic fields and they are also wonderful citizens of our University. They bring honor to Boston University and we are proud to call them Warren Professors,” Brown says.

The Warren Professorships, which faculty hold as long as they are at BU and retain as emeriti upon retirement, were established in 2008 to recognize the University’s most accomplished faculty members and are named in honor of BU’s first president. Those chosen must have held a full-time faculty appointment at the rank of professor for a period of years, have demonstrated extraordinary achievements in research, scholarship, and/or artistic production or performance, be recognized by peers and students as outstanding teachers and be actively engaged in teaching, research, scholarship, and the life of the University, and have demonstrated significant service to BU. The professorship comes with an annual scholarly allowance of $20,000 and funding for a month of summer salary.

“We are delighted and incredibly proud to be conferring Professors Costello and Bestavros with BU’s highest distinction for senior faculty,” says Jean Morrison, University provost and chief academic officer. “Both have devoted their careers to producing original research and scholarship of enormous consequence, pushing the fields of poetry and computer science in exciting and important new directions. The Warren Professorship was created to recognize the very best that our academic community has to offer, and we could not imagine two more accomplished or deserving recipients.”

Known for his expertise in computer networking, distributed computing, and high-assurance systems, Bestavros is the founding director of the Rafik B. Hariri Institute for Computing and Computational Science & Engineering, established in 2010 to create a community of scholars believing in the transformative potential of computational perspectives in research and education. He has led numerous initiatives on cloud computing, big data, and cybersecurity, including the Massachusetts Open Cloud (MOC) Exchange Project, and has collaborated on data science research with faculty University-wide. He has led numerous interdisciplinary University initiatives, such as the Data Science Initiative, the BU Computing Alumni Network, and the Council on Educational Technology & Learning Innovation.

Bestavros is a leading researcher with a reputation as an effective relationship builder: with other researchers, with policymakers by helping analyze data to address issues like gender-pay inequity in Boston, and with generations of computer science students during his 25 years at BU. He stays connected through a Facebook group with hundreds of students who have taken his Fundamentals of Computing Systems course over the past 20 years. “I can see where these students go,” he says, “and they can relate what they are doing now, in many ways, to how I introduced them to computer science.”

He says he was notified about the Warren Distinguished Professorship a few days after attending a moving reception honoring University employees for a quarter-century of service. “This award could not have come at a more meaningful time,” he says. “If you look at what I have been doing for the last 25 years, it has really evolved, just like our field has evolved, from sort of inner-looking research—trying to make computers better, cheaper, faster, and more accessible. About halfway into my tenure at BU, computer scientists started looking outward, toward society and how we can change the world. We realized what we work on can make a difference, and that was reflected in my work.”

Bestavros’ research ranks him in the top one percent of the most cited authors in computer science and has led to multiple patent applications, the formation of a start-up company, and more than $20 million in externally funded research projects. Among his numerous honors are the ACM Sigmetrics Test of Time Award and the United Methodist Church Teacher/Scholar of the Year, in 2010.

“Professors Bestavros and Costello have followed different paths, but both have arrived at the same place: they are renowned in their academic fields and they are also wonderful citizens of our University. They bring honor to Boston University and we are proud to call them Warren Professors.” —President Robert A. Brown

An internationally recognized literary critic and authority on modern American poetry, Costello has written widely about poets Marianne Moore, Elizabeth Bishop, Wallace Stevens, and John Ashbery. Much of her scholarship has focused on the relationship between poetry and the visual arts. She has written about landscape and environmental poetry (Shifting Ground, Harvard University Press, 2003) and the interplay of private and public spheres in still life motifs (Planets on Tables: Poetry, Still Life and the Turning World, Cornell University Press, 2008). Her latest book, The Plural of Us: Poetry and Community in Auden and Others, will be published by Princeton University Press this fall.

A member of the English department since 1977 and a full professor since 1992, Costello has served in numerous administrative posts, including director of the CAS Honors Program, director of graduate studies in English, interim chair of the English department, and interim director of the BU Center for the Humanities. She has earned several teaching accolades, including the Metcalf Award for Excellence in Teaching (1994) and the United Methodist Church Teacher/Scholar of the Year (2004). Costello is a fellow of the American Academy of Arts & Sciences and has received Guggenheim, Rockefeller, Mellon, and National Endowment for the Humanities research fellowships. She has served as jury chair for the Pulitzer Prize for Poetry, as well as holding editorial and advisory board positions with several academic journals, among them Modernism/Modernity, the Wallace Stevens Journal, Literary Imagination, and Twentieth Century Literature.

She says receiving the Warren Professorship was unexpected. “I was totally surprised. I was summoned by President Brown and thought I was going to be asked to be on a committee…I am very pleased to have the recognition. I have made BU my only professional home.”

Costello’s passion for teaching is apparent. “It is such a joy that I get to teach contemporary writing as well as classic works,” she says. “I love introducing students to new writers. The canon isn’t formed yet, so it is liberating for students” to be able to analyze works that are new to them and express what they see as meaningful and why.

She sees herself as a scholar and teacher who doesn’t treat poets as objects of worship, but rather promotes the power of their work to make a difference in people’s lives. “Literature draws attention to language. It can be a way of playing ourselves back to ourselves, heightening our awareness of the way we speak,” she says. “Even when our poets say things that are troubling, that is a very beneficial kind of awareness to have.

“Wallace Stevens said that he was an ‘exponent of the imagination’ of his society,” Costello says. “My work certainly touches on ethical, psychological, and even political ideas, and I draw from them in my thinking about literature. But my purpose is not to use literature to promote ideas in those realms. Rather, I see the imagination as a fundamental part of human thriving, and literature as a way that humans not only reflect, but inflect their worlds. Whether I am thinking about poems, paintings, or pronouns, I am an ‘exponent of the imagination.’”

The University now has 13 William Fairfield Warren Distinguished Professors. Once 15 faculty have been appointed, the honor will be bestowed only when a vacancy arises.

Michael Goldberg can be reached at michaelscottgoldberg@gmail.com.