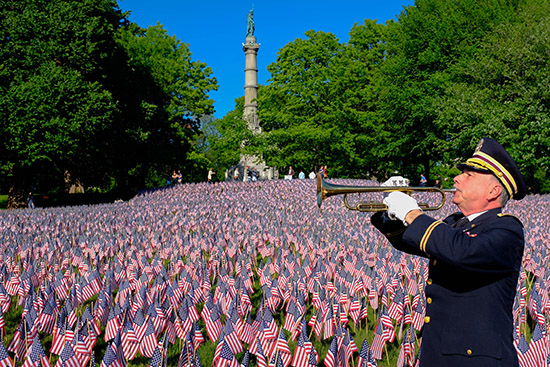 An estimated 37.2 million Americans are expected to travel this Memorial Day weekend, the highest number in a decade. But those planning to stay in Boston for the long weekend are in luck. As well as events honoring the men and women who have died while serving in the armed forces, Boston is hosting all kinds of festive events to kick off the unofficial start of summer, including shows, a music festival, and the return of the popular SoWa Open Market. We’ve put together a list of some of the more interesting offerings. Enjoy.

The USS Constitution Museum, devoted to the War of 1812, is honoring the sacrifice of our nation’s veterans this holiday weekend, hosting a series of family activities, among them the interactive exhibition All Hands on Deck: A Sailor’s Life in 1812, which recounts stories about some of the 1,243 sailors and officers who served aboard USS Constitution during the war. Visitors can scrub a ship’s deck on their hands and knees, scramble aloft to furl a sail in gale force winds, and crawl into a hammock for a quick rest, much as the sailors of two centuries ago would have done. Also, the Constitution is now in dry dock for her first major restoration in over 20 years, so you’ll be able to appreciate the remarkable structure of the hull of “Old Ironsides.”

The USS Constitution Museum, in the Charlestown Navy Yard, Charlestown, Mass., is open from 9 a.m. to 6 p.m.; phone: 617-426-1812. Suggested donation is $5 to $10 for adults, $3 to $5 for children, and $20 to $25 for families. Admission is free for all active duty, retired, and reserve military personnel. Honor, Courage, Commitment events and activities are Saturday, May 28, through Monday, May 30. Take an MBTA Green Line trolley to North Station and walk over the Charlestown Bridge, following signs for the Freedom Trail.

Flag Garden at the Boston Common

Each year, the Massachusetts Military Heroes Fund transforms the Boston Common into a rippling sea of red, white, and blue with the help of volunteers who plant 37,000 American flags—one for each of the courageous service members from Massachusetts who have died defending our country since the Revolutionary War. The Flag Garden is at the foot of the Soldiers and Sailors Monument on the Boston Common.

The Flag Garden is atop Flagstaff Hill on the Boston Common. Take any MBTA Green Line trolley to Arlington or Park Street. The garden is on display through Memorial Day, Monday, May 30.

This annual observance to fallen service members is at Veterans Memorial Park in the Back Bay Fens on Saturday, May 28. The tranquil park has monuments commemorating those who fought in World War II, the Korean War, and the Vietnam War, and also honors Sergeant Charles Andrew MacGillivary, a Boston resident who received a Medal of Honor for his role in the Battle of Normandy. Following the service, take a stroll through the adjacent Kelleher Rose Garden, which features more than 2,000 rosebushes comprising over 100 varieties of climbers, tea roses, and floribundas.

Honor US armed forces members who died in service to their country in a musical tribute hosted by the City of Boston Veterans’ Services, with performances by the Metropolitan Wind Symphony and a local surprise guest artist. The sunset concert, with a program of patriotic music, is at Christopher Columbus Waterfront Park in the North End.

The Honor & Tribute concert is Monday, May 30, at Christopher Columbus Waterfront Park, 100 Atlantic Ave., in the North End, at 6:30 p.m. The concert is free, but reservations are required and can be made here. Take an MBTA Green Line trolley to Haymarket, turn right onto John F. Fitzgerald Surface Road, then left onto Christopher Columbus Park Path,

The city of Cambridge has long marked the Memorial Day holiday with a parade and observance. This year’s event, scheduled for Monday, May 30, will begin with a cannon salute on the Cambridge Common, then the parade will proceed through Harvard Square and up Mount Auburn Street and conclude at the Cambridge Cemetery on Coolidge Avenue. An observance, with rifle salute, musical performances, and a bugler playing taps, will be held there. The parade will include color guards, bands, drill teams, and local youth organizations, along with veterans groups and police and fire personnel.

The Cambridge Memorial Day Parade and Observance is Monday, May 30, on the Cambridge Common beginning at 9:30 a.m. The parade is expected to arrive at the Cambridge Cemetery, 76 Coolidge Ave., at 11 a.m. Take an MBTA Red Line train to Harvard Square.

Billing itself as Boston’s largest music festival, this twice-a-year event has become a must for serious music aficionados. The spring 2016 festival begins on Friday, May 27, and runs through Sunday, May 29, on Boston City Hall Plaza. Some of the biggest names in music headline the event, among them Grammy-nominated Australian pop singer Sia—known for her hit singles “Elastic Heart,” “Chandelier,” and “Big Girls Cry”—who will kick off the festival Friday. Among the other main acts are Grammy-nominated Swedish dance-pop singer-songwriter Robyn on Saturday and the Grammy-nominated electronic music duo Disclosure on Sunday. Check out the full list of performers here. There will be a third stage this year, so more local talent will be included. When you need to refuel, head to one of the many food vendors setting up shop, like Ruth’s Chris Steak House, Firefly’s BBQ, Tasty Burger, and Bon Me. There will also be an expanded beverage program featuring a new wine pavilion and a custom Boston Calling beer.

The Boston Calling Music Festival is on Boston City Hall Plaza Friday, May 27, through Sunday, May 29, with the main entrance on Congress Street. Purchase three-day passes, weekend passes for Saturday and Sunday, or single-day passes here. Gates open Friday at 6 p.m. and music ends at 11 p.m. On Saturday and Sunday, gates open at noon, and music ends at 11 p.m. Large bags and backpacks are prohibited. Take any MBTA Green Line trolley to Haymarket.

A mainstay of the Boston theater scene since 1980, Shear Madness is a whodunit comedy caper that relies on audience participation to help solve a murder committed on stage. Audience members assist in cracking the case by pointing out clues, questioning characters, and ultimately, uncovering the identity of the killer. The improvisational production includes up-to-the-minute topical humor. Find out why more than 11 million people around the globe have flocked to this theatrical event.

The former South End Open Market @ SoWa has been rechristened the South End Open Market @ Ink Block, a nod to its new home in the Ink Block area of the Sound End. Over the years, the outdoor market has become one of Boston’s most popular warm-weather weekend attractions. Each Sunday from May through October, artisans, food trucks, and a Farmers Market will set up on Harrison Avenue in Boston’s South End. More than a dozen food trucks offer a range of cuisine, including gourmet pizza, grilled cheese sandwiches, and tacos. The Farmers Market offers locally grown produce, specialty foods, flowers, and plants; the Arts Market offers a wide range of jewelry, ceramics, clothing, and artwork; and the Vintage Market offers a rotating collection of antiques and vintage clothing, housewares, and ephemera.

The South End Open Market @ Ink Block is held every Sunday from May through October from 10 a.m. to 4 p.m. at 375 Harrison Ave. in Boston’s South End.

Free Memorial Day Admission to the Museum of Fine Arts

Regarded as one of the finest museums in the world, the Museum of Fine Arts Boston houses more than 450,000 works of art. In honor of Memorial Day, the museum offers free admission on Monday, May 30. Visitors will have the opportunity to make art of their own in various workshops, tour galleries with knowledgeable staff, and view the museum’s current special exhibitions #TechStyle and Megacities Asia. Visitors can also catch a musical performance by high school youth from Sociedad Latina‘s Musical Ensemble Group.