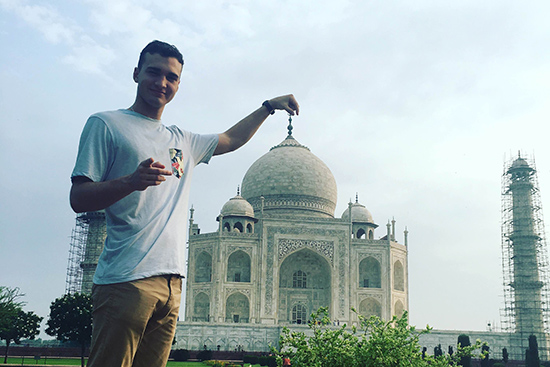 Kian McGee (SHA’18), who interned at the Taj Santacruz, at the Taj Mahal mausoleum in Agra, India. Photo courtesy of McGee

Every new job has a learning curve, but Serena Lipton’s required more training than most. Working as an intern at the Taj Santacruz in Mumbai, India, this summer, Lipton (CGS’16, SHA’18) had to master how to wear a sari, learn what ingredients are included in traditional Indian cuisine, and memorize the preferences and special requests of returning guests.

For eight weeks this summer, Lipton and three other SHA students interned at Taj Hotels across Mumbai. They spent time working in the hotels’ various departments, including housekeeping, front office, human resources, and food and beverage, learning the intricacies of running a luxury hotel.

“This was one of the most difficult things I’ve ever done,” Lipton says. “By the end of the internship, I felt very proud of myself and took away a new confidence knowing that I can adapt to anything now. Working in a different country teaches you more about yourself and the world. I wouldn’t have gained that experience otherwise, so I’m really thankful for it.”

Grundler says she rushed to apply for the Taj internship program after hearing about it from two classmates who had worked at Taj hotels last year and had great things to say about the experience. She describes her time in India as intense. “For starters, the sights and sounds—I have never heard so many cars honking in my life,” she says. “I broke out in hives at the end from the stress.”

The hives were the result of a three-week project she took on in the hotel’s food and beverage department. The Taj Mahal Palace had found that not enough guests were eating in the in-house restaurants, Grundler says, and so she was charged with analyzing two of them and coming up with recommendations on how to make them more attractive to diners. “I looked at Trip Advisor and in-house guest feedback, and studied competing restaurants,” she says. “The perceived value of the Taj restaurants wasn’t there. Their competitors had more of a wow factor, and people were happier spending their money there. I said that presentation of the food could be improved, price could be looked at, because it was so much higher than the competitors, and then I finished with a presentation to the general manager.” Management appreciated her input, she says, but had reached no decisions about her suggestions before she left.

McGee split his time working in the Taj Santacruz’s luxury coffee shop and with the sales and marketing team. He quickly learned important lessons about how customers at luxury hotels expect to be treated. “If you want to learn how to do hospitality right, you work at the Taj,” he says. “The Indian people love to be pampered, so if a guest asks for directions, even if it’s right around the corner, you physically walk them there and open the door. You pull out chairs and put the napkins on their laps. Don’t let them move a muscle. I had to completely change my service standards.”

While the stipend for the summer internships was small (15,000 rupees, or about $225), the students lived and ate at the hotel for free. (Need-based subsidies are available from SHA to help cover the cost of air travel to and from India.) The interns had six days off each month, and used the time to travel to popular destinations like the famous Taj Mahal mausoleum in Agra.

Lipton was surprised by the level of security at the hotels and elsewhere throughout the city. In 2008, 10 terrorists had stormed several locations in Mumbai—including the Taj Mahal Palace—killing 164 people. She says that attack was discussed during the group’s first day of orientation. One of the chefs she met at the hotel has a scar on his arm from a bullet wound during the attack. “There is definitely more security in India than in America,” she says. “When you enter buildings, sometimes malls and restaurants, you have to go through a metal detector, similar to at an airport.”

McGee says his overall experience was enhanced by getting to know his coworkers. “The first week I don’t think anyone liked us, because we were Americans,” he says. “I started trying to learn Hindi, and once I did that, I made a ton of friends. The local workers would take me out and show me where they ate and what they did for fun. That’s what I learned—if you’re in a foreign culture and experiencing culture shock, you have no choice but to immerse yourself.”

An Intensive, Immersive Internship Experience in India
0
share this