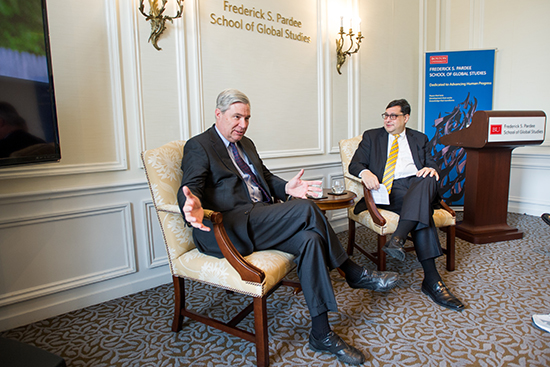 Republicans are controlled by climate change deniers, but the young, businesses, and academia are pushing back, said US Senator Sheldon Whitehouse (left), here with Pardee School Dean Adil Najam. Photo by Cydney Scott

All else being equal, a dozen to 20 Republican senators would vote on meaningful curbs on climate change today. The bad news is that all is not equal, and their party’s in thrall to fossil fuel industry donors like Charles and David Koch.

US Senator Sheldon Whitehouse (D-R.I.) delivered that message to 30 faculty and graduate students at the Frederick S. Pardee School of Global Studies Wednesday.

“At its heart, climate change is a story of corruption as much as it is a story of science,” said Whitehouse. “And when that corruption story has its worst manifestation in the vaunted United States of America…it’s not a great moment.” By corruption, he didn’t mean direct bribe-taking, which he said the Supreme Court has established as the standard for illegal corruption. Interest groups don’t wield influence through bribes: “They’re not some yokel who comes in from Alberta and says, ‘Hi, guys, I’m here, I need a big favor. Here’s $100,000.'”

Whitehouse was invited to address the select group in light of his environmental work in Congress and last December’s Paris climate change agreement.

More than 170 nations, including the United States, signed that accord, but, Whitehouse said, governments from China to the European Union have raced ahead of us to implement cuts in the greenhouse gas emissions responsible for warming temperatures. He said he has proposed legislation that would impose a $42.50-per-ton tax on carbon emissions, with the tax rising annually to encourage use of more benign energy sources until the global thermostat has been safely reset.

The approach economists favor for its administrative simplicity, a tax has a political advantage as well, Whitehouse said: “It’s the place to which every single Republican who has come to a solution on climate change has come.…The getaway car is waiting, and it’s the one they ordered.”

For the moment, fossil fuel industry donations hold the GOP captive, he said, a fact underscored when he denounced the Koch brothers, heads of the nation’s second largest privately held company. A Republican colleague—“not one of the greenies”—upbraided him: “What the hell are you complaining about? They’re spending more money against us than they’re spending against you” to enforce GOP purity.

Yet Whitehouse sees counteracting forces in capitalism. Young consumers are demanding environmental responsibility from businesses, and more than 100 of them, in turn, joined environmentalists in demanding action at the Paris climate conference. Meanwhile, academic research has exposed fossil fuel industry support behind what Whitehouse termed the “machinery” of climate change denial.

“The denial castle has been crumbling now for some years,” although its dismantling will be frustratingly slow, he said.

Whitehouse spent most of his appearance at Pardee fielding audience questions. He and Adil Najam, dean of the Pardee School, sat in chairs at the front of the small meeting room, facing the audience in an intimate, conversational format.

The son of a family of foreign service officers who “bounced from post to post all around the world,” Whitehouse said his lifetime has been marked by “a tide that has run in America’s favor around the world,” with developing nations especially admiring the example we set. But as industry money corrupts US politics on climate change, stymieing any progress while warming temperatures wreak havoc on global weather, agriculture, and habitable areas, the country risks squandering that goodwill, he warned.

“They see that it was the developed economies that did this, led by the United States,” he said. “I dread to think what would happen if that quiet tide that has run in our favor for my lifetime should shift the other way, because there are competing visions of governance in this world.”

Speaking the day after Donald Trump drove his remaining competitors from the race for the Republican presidential nomination, Whitehouse said every congressional delegation traveling overseas gets the same question about the businessman’s political success. They ask, “‘What’s happened to your country?’ So I think there’s a lot of anxiety about Trump’s nativism, isolationism, bluster, and sort of general ignorance of international things.” (Trump denies the notion of human-made climate change.)

Whitehouse has represented Rhode Island in the Senate since 2007. He was a US attorney and Rhode Island’s attorney general before that. He graduated from Yale and the University of Virginia School of Law.

His record addressing climate change and other environmental problems led Najam to express “gratitude for the battles you have been fighting on all our behalf.…We are all admirers.”

US Senator Addresses Politics of Climate Change
6
share this