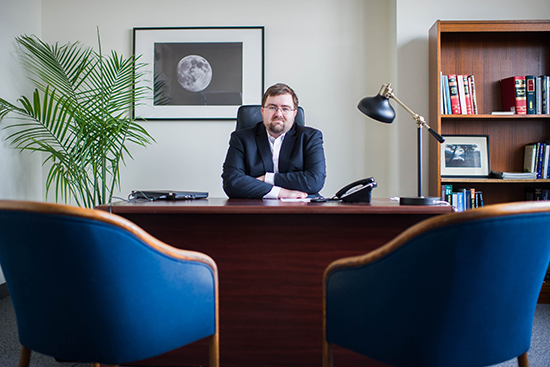 Michael Denham (LAW’15) at his Kenmore Square office. A BU, BC, and NU partnership employs recent law grads to handle cases for people who have a hard time affording lawyers. Photo by Jackie Ricciardi

Are you a student whose off-campus landlord won’t fix an unsafe condition? An immigrant struggling to navigate the government bureaucracy? A restaurant worker who isn’t getting paid for extra hours?

At Lawyers for Affordable Justice (LAJ), a new joint project of the BU School of Law, Boston College Law School, and the Northeastern University School of Law, low- and moderate-income people who need legal help can hire a determined lawyer at discounted rates.

The collaboration, whose Kenmore Square office, at 650 Beacon St., opened in January, was founded with help from an American Bar Association grant. What’s billed as a “legal incubator” brings together recent graduates from the partnering schools to provide legal services in four areas of civil law: immigrant rights, employment law, landlord-tenant matters, and small business law. No criminal law is practiced.

“There is a social justice component to this, both from the law schools’ standpoint and from the participant standpoint,” says Robert Burdick (LAW’72), a LAW clinical associate professor and director of the Civil Litigation Program. “From the law schools’ standpoint, we’re trying to help these recent graduates start their own businesses—a small practice or solo practice. But we are also encouraging them, as a condition of our financial support, to represent clients of modest means.”

Michael Denham (LAW’15), one of the LAJ lawyers, didn’t know he wanted to be a lawyer until he worked at a co-op at the Massachusetts Office of Consumer Affairs and Business Regulation as a Northeastern undergraduate.

“I worked the hotline, where people would call in with problems and questions about consumer law and housing problems and how they got ripped off on their car,” he says. “It wasn’t providing them legal help; it was providing them with information about how they can help themselves.”

Denham says his interest in helping people led him to law school at BU, where a course on immigration law showed him just how frustrating the immigration system can be.

“Looking at all the hurdles, complications, tricks, and traps—the pitfalls that can trap people when they’re trying to stay here because they want a better life—it surprised me,” Denham says. “I realized that’s a way I can help. I can help people get here and stay here, escape poverty and terrible conditions, make their lives a little better—make their lives a lot better.”

He says that joining LAJ offered a way to work in immigration law and also get some help starting his practice.

Burdick would like to see BU students take advantage of LAJ’s housing law services, where lawyers will negotiate with clients’ landlords for improvements as well as rent abatements provided for under state law. “I am calling it the off-campus housing initiative,” he says, adding that LAJ lawyers can take it to the next step in court as well.

In fact, most of LAJ’s first clients sought help with landlord-tenant issues, Denham says, although the group has seen no BU students yet. Having rented apartments in Boston all through college, “I have a soft spot for that kind of case,” he says with a smile.

There are currently eight LAJ attorneys, all of whom recently passed the bar exam. Working there will help them establish their own practices by providing the shared fourth-floor space in the BU-owned building, a part-time office manager, free software, business services, and mentoring from the law schools. The initial arrangement is in place for two years.

The schools are not acting as cocounsel with the LAJ lawyers, Burdick stresses. “Our job is to support them, to train them, to give them advice to help them set up their practices, but they would be representing the clients.”

At the moment, Denham is the only LAW grad at LAJ; four come from Northeastern and three from BC. Burdick says that’s basically the luck of the draw, and that the numbers will change. LAJ is set up for as many as a dozen attorneys.

“We’ll be successful if we are able to attract cases that provide a reasonable compensation for our lawyers,” he says, “and provide real, meaningful representation to people who otherwise wouldn’t have been able to afford it.”

There is 1 comment on Lawyers for Affordable Justice: Reasonably Priced Legal Help