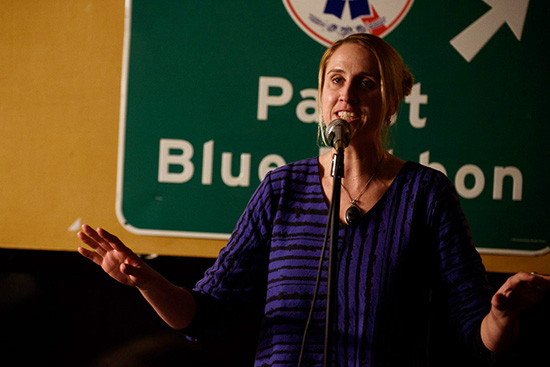 “If you stumbled into poetry night tonight by accident, congratulations,” Boston Poetry Slam SlamMaster Simone Beaubien greeted the crowd at the Cantab Lounge in Cambridge on a recent Wednesday night.

Boston Poetry Slam began hosting the weekly night at Cantab in the early 1990s, drawing spoken-word enthusiasts from around the Boston area to hear emerging and established poets read from their work.

We wanted to see what the event was all about, so after finding the building (hint: look for the green awning), we headed downstairs. At 7:30 p.m.—a half hour before the program’s start—the small room was already full of about 100 people. Seven rows of chairs in the middle and more along the walls do not offer much seating, so getting there early is a good idea. A small cash-only bar runs against the back wall. It is not wheelchair accessible.

The Slam runs from 8 p.m. to midnight and begins with a two-hour open mic, then a half-hour reading by a featured poet, and finally, an invitation-only slam poetry performance. Poets have to sign up in advance for the open mic and adhere to a three-minute limit. About 20 poets read, one a grandfather whose poem was inspired by his three grandchildren, he said. Among other topics were roommate struggles, romantic relationships, quitting a job, and past emotional struggles. Some poets were first-time performers, some regulars. The environment was friendly and encouraging, with people snapping, clapping, laughing, or humming at a powerful, relatable, or funny line.

After a short break, it was time for the featured reading, given this night by Ross Gay, author of five books of poetry. The most recent, Catalog of Unabashed Gratitude (University of Pittsburg Press, 2015), won the 2015 National Book Critics Circle Award (it was also was a finalist for the 2015 National Book Award in Poetry). Gay, an Indiana University associate professor of English and currently a Radcliffe Institute Fellow at Harvard, read “Sharing with the Ants,” “Feet,” and “Burial” from Catalog, a collection that explores the way nature offers solace. The audience roared their appreciation as he exited the small stage.

The standing-room-only crowd emptied out a bit after Gay’s performance, leaving about 40 people to listen to the slam poetry show.

That night was the final installment in the 8×8 poetry slam series, with 8 slam winners from previous contests competing head-to-head bracket-style for a $50 prize. The 8×8 round winner could take the cash or challenge the reigning Champion of Champions for a chance to win the slam season championship and a $100 prize.

With six poets eliminated, the slam was down to the final two, and tension was mounting. Each read a final poem, and the judges raised their whiteboards with the scores. Beaubien tallied up the scores—a tie—and the competition went into overtime. Each finalist read another one-minute poem. Finally, a victor was chosen: Nora Meiners, a Cantab regular since 2011. She chose to forgo the $50 prize and take on the reigning Champion of Champions, Mckendy Fils-Aimé. After each read a never-before-performed two-minute poem, the judges ruled: Fils-Aimé, of Manchester, N.H., would continue as Champion of Champions, a title he’s held since October 2015.

We really enjoyed our night at the Cantab Lounge. While four hours seems like a long time to listen to poetry, the evening went by quickly, and the intermissions between each show section were a welcome break. The audience was a mix of all ages.

The featured performer tonight, Wednesday, April 27, is Rose M. Smith, a poet from Columbus, Ohio. She is the author of Shooting the Strays (Pavement Saw Press, 2003) and A Woman You Know (Pudding House Publications, 2005). Tonight is also the final night for slam poets to qualify for the Individual World Poetry Slam roster.

The Boston Poetry Slam is held every Wednesday night at Downstairs in the Underground at the Cantab Lounge, 738 Massachusetts Ave., Central Square, Cambridge; phone: 617-354-2685. Doors open at 7:15 p.m., the open mic show starts at 8, the featured event at 10, the poetry slam at 11. The show is 18+ (ID required) and the cover charge is $3 per person. The show frequently sells out and seating is limited, so get there early. Take an MBTA Red Line train to Central Square.