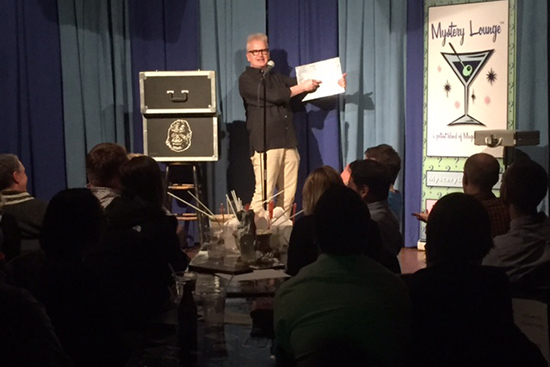 You’ll find both laughs and a bit of sleight-of-hand tonight at the Comedy Studio’s Mystery Lounge. The Comedy Studio, directly above the Hong Kong Restaurant in Harvard Square, has different themed shows Tuesday through Sunday nights from 8 to 10 p.m. Tuesday’s Mystery Lounge bills itself as “Boston’s longest running magic and comedy nightclub.”

Now celebrating its 20th year, the Mystery Lounge is the longest running, and only, comedy-magic show around Boston. Tonight’s performance features three magicians and the club’s “Comic in Residence.”

The Mystery Lounge was founded by comedian-magician Steve Kradolfer and mentalist Jon Stetson, who has performed for three US presidents and appeared frequently on TV. In 1996, the two were looking to create a magic show unlike any other, and they launched their blend of comedy and magic at the Green Street Grille before setting up shop at the Comedy Studio in 2002.

Each Tuesday, a handful of magicians and comedians—local, national, and international—are invited to stage an interactive show that challenges the premise of a typical magic or comedy show. Previous performers have been known to swallow balloon animals whole, make doves disappear, and even pretend to scoop their own eyes out with a melon-baller.

Tonight’s performers are Ben Nemzer, a sleight-of-hand consultant for theater and film, Harvard alum Harrison Greenbaum, a magician and comedian who performed on NBC’s Last Comic Standing and was named one of Comedy Central’s “Comics to Watch,” and Mystery Lounge regular Bob Riordan. The trio will be joined by studio comic in residence Kathe Farris, who is performing at the Mystery Lounge throughout August.

The Comedy Studio’s other themed nights feature a variety of stand-up and improv talents and are hosted by a mix of newcomers and professionals. Shows are generally less crowded in the summer months, with students away, but during the school year they sometimes sell out, so plan to purchase your tickets in advance or arrive early.

The Mystery Lounge at the Comedy Studio, 1238 Massachusetts Ave., Harvard Square, is upstairs from the Hong Kong Restaurant. Tonight’s two-hour show begins at 8 p.m. Tickets are $15 and can be purchased online or at the door. Food and drink are available. Find more information here or call 617-661-6507. Take any MBTA Red Line train to Harvard Square and walk.

Comedy and Magic on Tap Each Tuesday in Cambridge