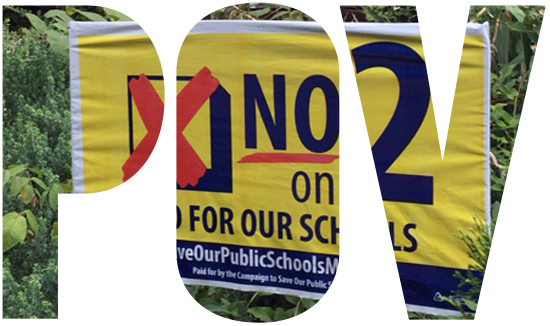 Massachusetts voters will decide on November 8 whether to increase the number of charter schools in the state, or not. Question 2 on the ballot proposes to expand the number of charter schools in underperforming school districts throughout the state. The genesis of charter schools in our nation is part of the wider school reform agenda that emerged from the denigration of government in general, and public schools in particular, beginning with Ronald Reagan’s 1981 inaugural address and the publication of the National Commission on Excellence in Education report A Nation at Risk in 1983. In today’s political environment, it is important to fact-check before deciding whether to vote yes or no on this question.

Political leaders have denigrated traditional public schools for decades. When the results of the 2012 Programme for International Student Assessment, or PISA, were released, Arne Duncan, then US Secretary of Education, declared that the results for the United States “are straightforward and stark: It is a picture of educational stagnation.” While Duncan and others focused on our “mean scores,” a more in-depth analysis presented a very different picture.

Of the American students who sat for PISA, 38 percent were from the two lowest socioeconomic categories. That is by far the largest percentage of low-income test-takers among all of our comparative nations. (The highest scorers, like Shanghai, Singapore, and Finland, had almost no low-income test-takers.) The United States has a higher percentage of low-income students in our public schools than any of the comparative nations in the Organisation for Economic Co-operation and Development (OECD). In an important way, that is a good thing, because in many of the highest scoring nations, low-income students do not attend school.

But it is incontrovertible that students from low-income families and communities throughout the world score far lower than students from more advantaged families and communities on these tests. So it is not surprising that our average scores are far lower. American public schools with fewer than 10 percent low-income students score at the very top on PISA. And low-income US students score higher than all other low-income groups outside the United States on PISA. But nobody knows that. The actual news about American schools is way better than the misleading headlines.

Driven by the incomplete and deceptive interpretation of test scores like PISA, public schools have been subjected to oppressive, top-down, one-size-fits-all school reforms such as Common Core Standards. This has deprofessionalized teaching and demoralized teachers. The development of charter schools is a major response to the perception that our public schools are lousy.

It is easy for charter advocates to grab the moral high ground in this debate. Poor parents should have the kind of good school choices that more middle- and upper-class parents have. The freedom to innovate and share the results with all public schools is a great idea. Healthy competition is good for all schools. I have seen excellent and humane charters, full of hardworking, talented, and idealistic faculty and staff. However, I have also seen too many charters that raise serious concerns.

Too many charter schools are test-prep factories with very rigid and rote academic formats. Too many are characterized by harsh punitive cultures; “no excuses” practices misunderstand the developmental nature of children and the impact of poverty on children. Many charters exclude children—in formal and informal ways—who jeopardize the academic profile of the school. Charter school teachers and leaders do not send their own children to their schools; wealthy supporters of charters often send their children to private schools with cultures that are the opposite of the rigid charter cultures. And charters have a dismal record of retaining both teachers and leaders.

Perhaps the least known characteristic of charters is that our taxes are taken from our public schools and enrich private investors. Typically, charter schools operate as nonprofits. However, the buildings in which they operate are generally owned by private landlords who benefit financially from taxes that are transferred to the operation of charters.

There are better ways to reinvigorate our public schools. We should develop additional low-income housing in all suburbs so that many more low-income children can attend integrated schools with proven cultures of success. We can develop additional magnet, pilot, and “schools within schools” in public school districts, which provide additional autonomy for teachers and leaders. We should renegotiate teacher tenure so that teachers are hired for three years of probationary service—exactly the way it is today—and then granted four-year contracts, similar to the way we hire and retain public school principals and superintendents. “School-based accountability” should hold whole schools, not individual teachers, responsible for the academic, social and emotional, and civic progress of students over time.

And let’s pay teachers who work in schools with a preponderance of children from low-income families significantly more, and create working conditions in those schools that provide the kinds of services and support that more advantaged children receive from their schools, families, and communities.

There are 81 charter schools in Massachusetts. They should continue and prove themselves over time, not only by annual test scores, but by retention of faculty and leaders and the success of their graduates. If charters demonstrate their value, then perhaps we can revisit Question 2.

Robert Weintraub (SED’86), a School of Education research professor of educational leadership and policy studies, can be reached at rjtraub@bu.edu.

POV: Massachusetts Should Vote No on More Charter Schools

There are 23 comments on POV: Massachusetts Should Vote No on More Charter Schools

POV: Massachusetts Should Vote No on More Charter Schools
23
share this