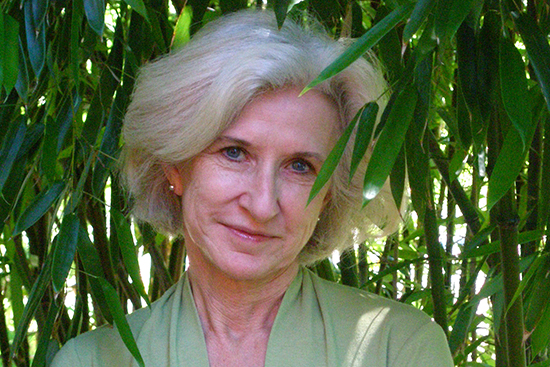 During a career that spanned nearly 40 years and produced more than a dozen books, C. D. Wright earned a reputation as one of the most influential poets of her generation, with a voice so original that the New York Times characterized her work as “utterly beyond category.” She had just published a new collection of essays and finished work on a book of poems when she died unexpectedly in January.

Wright, Brown University’s Israel J. Kapstein Professor of Literary Arts, was the originally scheduled featured speaker at tonight’s Robert Lowell Memorial Poetry Reading. Instead, her work will be read by several BU and Boston poets, among them three-time US poet laureate Robert Pinsky, a College of Arts & Sciences professor of English.

“As a poet, she was compressed, unconventional, open, surprising,” says Pinsky, who included Wright’s poem “Self-Portrait on a Rocky Mount” in his 2009 anthology Essential Pleasures. He knew Wright well and says she was noted for her genuine interest in other people and her complete lack of academic or artistic snobbery. He says that when the series organizers learned of Wright’s death, they decided to honor her work rather than select another poet. “We wanted to keep to the purpose of the Lowell series, for us as a writing program, to celebrate the work of an inspiring visitor,” he says.

Known for her deep commitment to social justice, Wright won the 2010 National Book Critics Circle Award for One with Others [a little book of her days]. The book-length poem is about a white woman from a small Arkansas town who joined African Americans in a march in Memphis, Tenn., after the assassination of Martin Luther King Jr. (GRS’55, Hon.’59), and as a result, lost custody of her children and became something of a social outcast in her community. In another book, One Big Self: Prisoners of Louisiana, Wright based her poems on interviews she conducted with inmates at several state prisons.

Her most recent volumes are the collection of essays The Poet, The Lion, Talking Pictures, El Farolito, A Wedding in St. Roch, The Big Box Store, The Warp in the Mirror, Spring, Midnights, Fire & All (Copper Canyon Press, 2016) and a new poetry collection, ShallCross (Copper Canyon Press), due out later this month.

Wright, who received a MacArthur Foundation Fellowship in 2004, believed deeply in the importance of poetry in contemporary society. “Poetry is a necessity of life,” she once said. “It is a function of poetry to locate those zones inside us that would be free, and declare them so.” For her, a life without poetry was unthinkable. “I write it, study it, read it, edit it, publish it, teach it.…Sometimes I weary of it. I could not live without it. Not in this world. Not in my lifetime.” 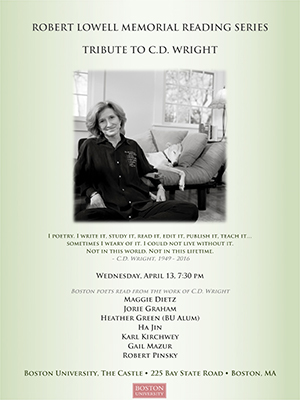 Typically, the Lowell Poetry Reading presents both an established poet and a recent graduate of the Creative Writing Program in tandem. On this occasion, however, Heather Green (GRS’09) will read from her work at 4:30 p.m. at the Castle.

The author of two chapbooks, No Omen (LATR Press) and The Match Array (Dancing Girl Press), Green is also a noted translator, particularly of the poems of the Romanian and French avant-garde writer Tristan Tzara, one of the founders of the antiestablishment Dada movement. She fell in love with Tzara’s work in high school after reading it in the Random House Anthology of 20th Century French Poetry, drawn to his sense of the poetic line and his “unapologetic and melancholy idealism.”

Green says she’s “interested in poetry that without being ‘occasional,’ contributes to social justice, either subtly or overtly.” She plans to read poems she wrote while living in Boston and in Rome, many inspired by Roman history and architecture, the tomb of Saint Peter, and the ubiquitous images of the Madonna and Child in the city’s churches and museums.

For the evening reading, Green has chosen poems from Wright’s 2002 collection Steal Away, which she describes as having a “rugged feminism, a wild eroticism, and a voice that I admire.” Wright, she notes, “fiercely resisted labels, joining, or schools,” but what characterizes her work is her ability to use “diction, syntax, and cadence to convey a kind of hidebound (Wright’s word) stubborn grace that’s always connected to her Arkansas roots.”

A George Mason University assistant professor of creative writing, Green says she draws on lessons she learned at BU in her own teaching. “The MFA program at BU was one of the most challenging and gratifying experiences in my life,” she says. “It transformed my ideas about poetry, raised my own expectations of myself, and gave me a new community of writers I admire. I had the great privilege of learning how Robert Pinsky and Louise Glück and Maggie Dietz each approached the reading of a poem, the enjoyment of a poem, and the work of identifying the heart of, and attempting to fully realize, a poem. I got to watch masters at work and see how talent is made through intense reading, thought, effort, patience, revision, and dedication.”

Like Wright, Green believes deeply in the vital role poetry plays in contemporary life, something she was reminded of at a recent memorial service for her father.

“Several of his friends, Marine and Navy pilots and veterans, brought poems: Catullus 101 scrawled on the back of a boarding pass and Robinson Jeffers beautifully read. I was in awe of the way poetry made the occasion more sacred and profound and connected those in attendance. It’s a great conversation, one that works against the dumbing down of America, and I feel lucky to be a part of it in a small way.”

The Robert Lowell Memorial Poetry Reading is tonight, Wednesday, April 13, at 7:30 p.m., at the Castle, 225 Bay State Road. Presented by BU’s Creative Writing Program, it is free and open to the public. A book signing and reception follow. Heather Green (GRS’09) will read from her own work at 4:30 p.m. at the Castle.