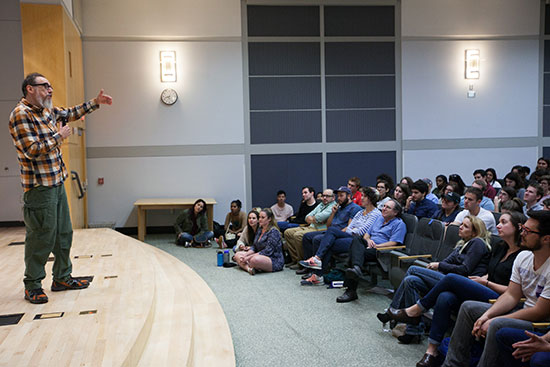 Seinfeld writer, producer, and Emmy-winner Larry Charles spoke to a standing-room-only crowd that spilled outside the Photonics Center auditorium. Photo by Matthew Healey

Most people in the audience Friday night at the Photonics Center weren’t born when Seinfeld first aired, but that didn’t dampen their enthusiasm for an appearance by Seinfeld writer, producer, and Emmy-winner Larry Charles, who screened a selection of his work and answered questions.

Charles was at the University as part of the College of Communication Cinematheque series, which brings accomplished filmmakers to campus to screen and discuss their work.

After leaving Seinfeld in 1994, Charles was a staff writer and executive producer for Mad about You, produced and directed HBO’s Curb Your Enthusiasm, wrote and was executive producer for Entourage, and directed Sacha Baron Cohen as the title characters in the hugely successful (and often wildly irreverent) mockumentary films Bruno and Borat. The evening started with his screening episodes of Seinfeld (“The Baby Shower”) and Curb Your Enthusiasm (“Mister Softee”) and the unaired pilot of a Kanye West HBO series that never materialized. Afterward, he took questions from the audience, and reflected on some of the more revealing moments experienced while filming Bruno, about a gay Austrian who travels to the United States in the hope of starring in his own television show.

“Because Bruno was so blatantly gay, so flamboyant, everyone hated him right off the bat,” Charles said. “We learned a harsh lesson. That was one of the biggest surprises of making that movie, how much people hated that character before he even did anything. Bruno would walk down the street and people would just push him or say something nasty to him. We wound up capturing a very dark image of America with that movie. And now that I see what is going on with this country in this election cycle, it kind of makes sense.”

In introducing Charles, Cinematheque curator and COM lecturer Gerald Peary said that in the program’s 20-year history, “our guest tonight is perhaps the most important person for shaping comedy.” Charles wrote some of Seinfeld’s most ludicrous and dark episodes, including two that were never aired.

“I think that’s a formula for me—taking things that normally wouldn’t be considered funny, and trying to find the humor in them,” he told a standing-room-only crowd that spilled outside the auditorium. “I feel comfortable with that and feel like it is a worthwhile artistic pursuit, because it forces you to keep pushing and figuring out what that boundary is. If I had listened to anyone along the way, I certainly wouldn’t be here right now.”

Peary asked Charles to respond to the widespread assumption that he wrote the darker episodes of Seinfeld, and Charles mostly agreed. “As you can see with the ‘Baby Shower’ episode, it deals with some subjects that would be taboo today,” he said (George trying to take revenge on an ex-girlfriend at her baby shower, and Jerry dreaming he will be killed for stealing cable). “I’m attracted more to the dark side, I suppose. The good thing was that Jerry [Seinfeld] and Larry [David] were very cool and supportive. They encouraged me to take advantage of the Kramer character more and they gave me the permission to do that kind of stuff.”

Although best known for his work on Seinfeld, Charles prefers his work on subsequent projects, because he had more ownership of them. “I felt like I was the George Harrison of Seinfeld,” he said. “I had John and Paul to deal with, but it was really hard to get songs on the record.” David and Seinfeld “were very supportive, but it was their filter. With Curb, it’s the same thing.”

When David invited Charles to work on Seinfeld, he told him, “We’ll make 13 episodes, make a little money, and then it will get canceled and we’ll move on.” Charles said “that wound up being a liberating theory for us because we didn’t really give a shit. We wrote exactly what we thought was funny, and we were doing terrible in the ratings. So we kept pushing and pushing until it became Seinfeld.”

Asked how much of film for him is going against the norm, he said that he admires filmmakers who “break the rules,” specifically mentioning director John Waters. “I don’t want to give people what they want—I want to challenge them,” he said. “I was a big fan of Andy Kaufman, who was a conceptual comedian, who would do things to piss the audience off.”

Breaking rules was a big part of the filming of Borat and Bruno. During Borat, which is about a fictional Kazakhstani journalist traveling through America, Charles estimates that the production was stopped by police 150 times. “We had a guy with a black mustache driving around in an ice cream truck near the White House, with four guys in the back holding big, black things that you couldn’t tell were cameras from far away,” he said. “I found it to be an exhilarating experience, because I knew we hadn’t done anything illegal. I wound up having a really good rapport with police around the country, because I ended up speaking with officers in every state that we visited.

“As a director, in Borat, I knew the scene was doing well if the police were called,” he said. “I’m not afraid to take it to that place, because comedically, if you can get there in an honest way, it really pays off.”

One student asked Charles to recall the most memorable experience of his career. His answer: during the filming of Bruno, the cast and crew had to flee from an angry mob in Jerusalem hell-bent on stoning them after Bruno walked through a traditional Hasidic neighborhood wearing skimpy, inappropriate clothes. An angry crowd gathered and some started throwing stones. “It was the only time Sacha Baron Cohen broke character,” Charles said. “He started yelling, ‘But I’m a Jew! I’m a Jew!’”

Seinfeld Writer on Darkness and Absurdity

There are 2 comments on Seinfeld Writer on Darkness and Absurdity