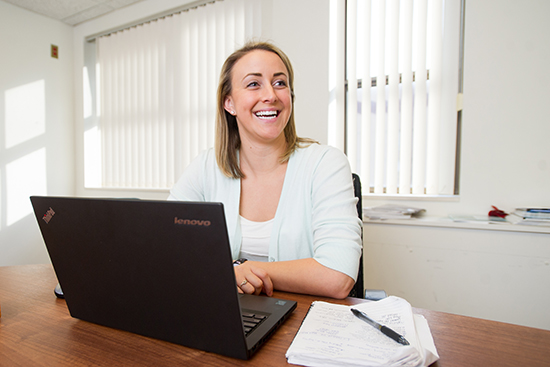 Christine Baugh (SPH’12) was recognized by Forbes for her work on chronic traumatic encephalopathy and its link to concussions in sports. Photo by Cydney Scott

Christine Baugh joined the School of Medicine Chronic Traumatic Encephalopathy Center as a research coordinator in 2010, when it was just a handful of people crowded into one small office. The Harvard grad quickly became a key member of the team that was studying the progressive degenerative disease of the brain, as its link to concussions in sports made headlines.

Her numerous tasks included calling families whose loved ones had passed away to ask them if they wanted to donate their brain, and conducting neuropsychological tests on former NFL players, says Baugh (SPH’12).

Now her work has landed her among nine BU alums on Forbes magazine’s “30 Under 30” list of “breakout talents and change agents” in categories such as sports (where Baugh is found), finance, and consumer tech.

“We are thrilled to see such an accomplished group of BU graduates on this year’s lists,” says Jean Morrison, University provost and chief academic officer. “It is a tribute to their outstanding efforts and aspiration to set themselves apart, but also to our faculty, who work especially hard to help develop the next generation of leaders and professionals.”

Now a doctoral student at Harvard, the 28-year-old Baugh is working on a wider view of the costs and benefits of sports participation, studying how NCAA and sports league policies can affect injuries and the role of the athletic health care delivery system. She’s considering career paths from a research faculty role to one involved on the front lines of sports medicine and regulation.

Baugh arrived at Harvard as a freshman from the Midwest thinking she might become a doctor, but found that premed wasn’t for her, and neither was neurobiology. “I wasn’t a one-cell-through-the-microscope kind of person,” she says. “I was more interested in the implications of neuroscience on individuals, on society.”

A multisport athlete in high school and a rower in college, she’d been following the early reports about concussion sports injuries. After graduating with a bachelor of arts in history and science, she reached out to Christopher Nowinski, codirector of the CTE Center, eventually landing a job there.

Baugh earned a master’s at the School of Public Health, in the health law, bioethics, and human rights department, while working at the center, then in 2014 signed on to the PhD program in health policy, concentrating in ethics. She’s still working on papers and other projects with the CTE Center, while wider questions about the health effects of sports, both positive and negative, have become the focus of her career.

“I know I made this list,” she says, “but I still have a lot to learn. This is a starting point really.”

The achievements of 26-year-old Alexandria Lafci (CAS’11) and her New Story Charity are more concrete—literally. With her partners Brett Hagler and Matthew Marshall, the Pardee School graduate is using crowdfunding to build homes for the poor, homeless, and displaced in the developing world. Their swift results—more than $1 million has been contributed so far—earned the trio a spot on the list in the social entrepreneurs category.

“We are learning what it takes to build lasting communities,” Lafci says.

In the last year, New Story Charity has built 151 homes in Leveque, Haiti, clearing out a tent encampment people had been living in since the 2010 earthquake; the last families are moving into their new homes this month. Each home costs about $6,000 to build. Donors get a video of the family whose house they supported, and with no money spent on advertising, the donor base has grown largely through word-of-mouth so far.

For its second project, New Story will offer new homes to residents of about 90 shacks on a steep, muddy hillside in Monseñor Romero, El Salvador. “Homes are sliding down, walls are falling on homes farther down the hills, trees are falling on homes,” Lafci says, and the families are facing eviction. The project went online in November, and funding is more than half complete, she says. A third project will be announced this spring.

At BU, Lafci earned a bachelor’s in international relations, having studied abroad in Morocco and led a Global Business Brigades delegation to Panama. After graduation, she spent two years teaching sixth grade English in Washington, D.C., for Teach for America. She also worked in operations management for an industrial supply firm in Atlanta. “I hated it,” she says. “I was not waking up feeling like my day had an immense purpose.”

Lafci spent her off-hours looking for a way to build a prosocial organization. She met Hagler and Marshall at a gathering for social entrepreneurs, and within a few months they and a fourth founder, Mike Arrieta, started New Story. Last year, when they were accepted into the well-known Y Combinator start-up incubator program in San Francisco, they quit their day jobs and moved there to work on it full-time. Tech industry leaders who signed on as advisors contributed operating expenses, and all money raised goes to building homes. Lafci is chief operating officer.

The land the houses are built on is owned by the families—provided either by local government or New Story’s nonprofit partners—with New Story working with local contractors to build the local economy as well as the homes.

“We’d like to build 1,000 communities in the next 10 years,” Lafci says. “There are a lot of organizations that build homes. Homes are part of the foundation of a community, but there are a lot of other things that are required—making sure there’s access to clean water, making sure there are schools for children to go to, and other infrastructure. We work on curating our network of local partnerships so we are building sustainable communities.”

If the social benefits of Baugh’s and Lafci’s work are clear, 29-year-old Ben Friedman’s might at first appear simply delicious.

Friedman (COM’08) and Brad Gillis, a friend since childhood, are the founders of the Homegrown Sustainable Sandwich Shops, with 10 restaurants in their native Seattle area and an expansion to California in the works. They have more than 200 employees and over $8 million in 2015 sales for their ham, turkey, chicken, and other sandwiches, plus soups, salads, and breakfast items.

The company tries to use local or organic—both, when possible—ingredients, and Friedman and Gillis have gone so far as to start their own farm outside Seattle to provide spinach, baby kale, heirloom tomatoes, and other ingredients in season. This isn’t just Portlandia-style foodie intensity. They are at least as committed to the environment as they are to their $8.50 “TLT”—organic tofu and roasted garlic aioli (add avocado for $3). Their restaurant staffers regularly take a turn in the Sprouting Farm fields, and sustainability is a watchword, even in restaurant design, with recycled materials and high-efficiency lighting used. They contribute to environmental nonprofits, including 5 percent of all online sales.

“I’ve always been really socially motivated,” says Friedman, whose bachelor’s is in advertising and sociology. “With the advent of social entrepreneurship right around the time we were in college, it occurred to us we didn’t have to be in the nonprofit sector to give back.”

Friedman and Gillis wrote 10 business plans for socially responsible businesses after graduation. “Everyone in our lives advised us against going into the restaurant business,” Friedman says, but the environmental impact of food and agriculture drove them onward. He says that their environmental efforts are an integral part of their work, not a sideline. “As we get bigger and expand our supply chain,” he says, “we’re going to have more and more positive impact with each sandwich sold.”

Making a Better World, from Neuroscience to Sandwiches

There are 2 comments on Making a Better World, from Neuroscience to Sandwiches

Making a Better World, from Neuroscience to Sandwiches
2
share this