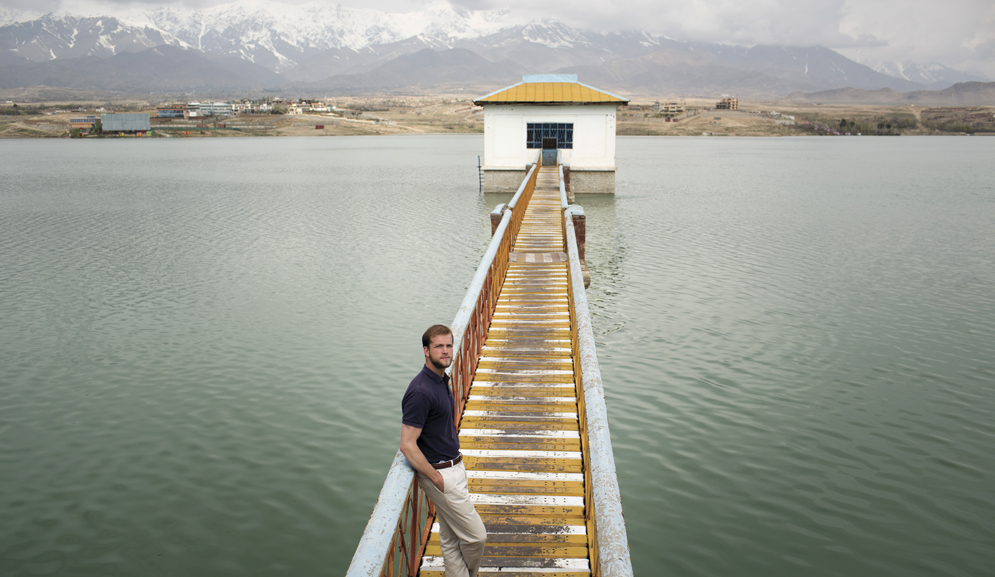 Former BU rowing champion Matthew Trevithick was released Saturday, January 16, from an Iranian prison after serving 40 days. No reason has been given for his arrest. Photo by Joel van Houdt

Journalist and humanitarian Matthew Trevithick, a former BU rowing champion, was one of five Americans released from prison by the Iranian government on Saturday, January 16. The Hingham native had been studying Farsi in Tehran at the time of his arrest, and had been held for 40 days in the notorious Evin Prison in Tehran. He was met by his family at an emotional homecoming at Logan Airport Sunday evening. His release was separate from that of the four Iranian Americans also freed. The Wall Street Journal reports that Trevithick’s release was not part of a negotiated prisoner swap that called for the United States to release seven Iranians, and the Boston Globe reports that Secretary of State John Kerry (Hon.’05) personally pressed for his release in negotiations that were so fraught with risk that Trevithick’s family was instructed not to mention his detainment.

The prisoner swap, which included the release of Washington Post journalist Jason Rezaian, winner of BU’s 2015 Hugo Shong Reporting on Asia Award, who had been held in Evin Prison since July 2014, came just hours prior to an announcement that the United States and European nations were lifting sanctions they had imposed on Iran because of its nuclear program. The New York Times reports that the actions came after international inspectors determined that Iran had dismantled parts of its nuclear program.

No reason has been given for Trevithick’s arrest and detainment, which was not reported to US officials. The Boston Globe reports that US officials received confirmation of Trevithick’s detainment in December after his family had become concerned for his safety. Amelia Newcomb, Trevithick’s mother, told the Globe that the family received a monitored phone call from her son about halfway through his imprisonment.

Trevithick (CGS’06, CAS’08) is known to many in the BU community for his efforts, chronicled in a 2013 Bostonia story, to launch a rowing team in Kabul, Afghanistan, where he was director of communications for the American University of Afghanistan from 2010 to 2014. The six-foot-four-inch 2008 Head of the Charles silver medalist has an abiding passion for competitive rowing and for cultures of the Middle East. He studied Arabic at BU, where he majored in international relations. According to his website, after graduating Trevithick joined the Woodrow Wilson International Center for Scholars in Washington, D.C., where he worked as a research assistant for writer Robin Wright on her book Rock the Casbah: Rage and Rebellion across the Muslim World, which won an Overseas Press Club award for Best Nonfiction Title in 2012. He also worked at Georgetown University’s Center for Contemporary Arab Studies.

Trevithick then landed a job as assistant to the provost at the American University of Iraq Sulaimani, arriving there with a 90-pound rowing machine, and he soon enlisted other BU oarsmen to help organize a rowing club. In 2010, he moved to Kabul, where he edited the autobiography of the country’s first minister of higher education after the fall of the Taliban, and wrote for the Wall Street Journal, the Atlantic, Foreign Affairs, the Christian Science Monitor, and the Daily Beast. Trevithick, who was active on social media, was a cohost on Sources & Methods, a biweekly podcast whose website says that “interesting people doing interesting things get to talk about the what, how, and why of what they do.”

In 2013, Trevithick cofounded SREO, a nonpartisan research center based in Turkey, whose mission, its website says, “is to develop practical strategies for stakeholders and donors engaged in Syria to effectively respond to the ongoing conflict and humanitarian crisis.” In September, he took a four-month leave of absence from the organization to study Farsi at the Dehkhoda Lexicon Institute & International Center for Persian Studies, a language school affiliated with Tehran University.

Trevithick’s family issued the following statement after his release Saturday: “We are very happy that our son, Matthew Trevithick, was released today after 40 days of detention at Evin prison in Tehran.…We are profoundly grateful to all those who worked for his release and are happy for all the families whose loved ones are also heading home. We look forward to reuniting with Matt and ask that everyone respect his privacy as he returns.”

Besides Trevithick and Rezaian, the other prisoners released Saturday are Amir Hekmati, a Marine veteran from Flint, Mich., Saeed Abedini, a pastor from Boise, Idaho, and Nosratollah Khosravi, a business consultant who works for a United Arab Emirates–based oil company. As of this writing, Khosravi remains in Iran.

The New York Times reports that the negotiations for the release took place in Geneva, and that the Iranians released were described by American officials as convicts or suspects in sanctions violations.

BU Alum among Five Americans Freed by Iran
7
share this