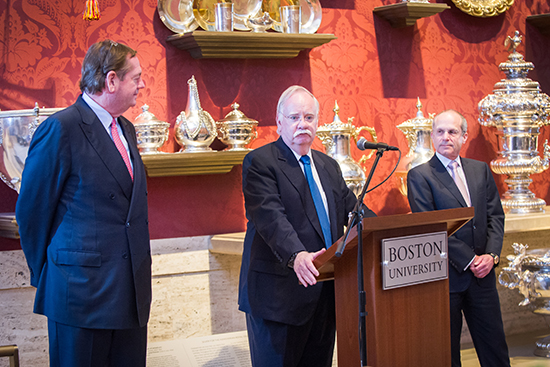 Board of Trustees chairman Robert A. Knox (CAS’74, Questrom’75) (from left), President Robert A. Brown, and campaign chairman Kenneth J. Feld (Questrom’70) announce the $1 billion milestone to the trustees.

The lapel pins handed out at the end of the night said it all: “A million, a billion, and counting!”

The Campaign for Boston University passed its original goal of $1 billion last week, more than a year ahead of schedule, and students wrapped up more than a million hours of community service pledged when the campaign launched in September 2012. At a trustees dinner last Thursday in the Museum of Fine Arts Koch Gallery, President Robert A. Brown already had his eye on the expanded fundraising goal of $1.5 billion by 2019.

“We have the momentum,” said Brown. “The ship is leaving, the bus is leaving, the train, whatever piece of transportation you like. What the campaign extension does is give the rest of our alumni and friends the chance to get on the vehicle. And I think it’s going to be a wonderful ride over the next couple of years.”

The campaign’s accomplishments so far include the founding of the Pardee School of Global Studies and Kilachand Honors College and the $50 million gift from trustee Allen Questrom (Questrom’64, Hon.’15) and Kelli Questrom (Hon.’15) to endow the Questrom School of Business. The campaign has funded 65 new professorships and 214 new scholarship funds, and has changed the campus landscape with the construction of the Yawkey Center for Student Services, the building named for Sumner M. Redstone (Hon.’94) at the School of Law, the Engineering Product Innovation Center, and on the Medical Campus, the Medical Student Residence.

Campaign chairman Kenneth J. Feld (Questrom’70) and Board chairman Robert A. Knox (CAS’74, Questrom’75) joined Brown at the podium for the announcement, which drew a standing ovation from the trustees. Board members have already contributed more than $210 million to the campaign. “We reached this goal because of the action of this Board,” said Brown, who also emphasized the broad-based nature of the campaign.

“The most impressive statistic about the campaign to me personally is that already in the campaign we have 117,000 donors,” Brown told the trustees, joking that such a large number would have seemed like a hallucination when the quiet period of the campaign began in 2010.

The president noted that 12 percent of the money came from 105 other countries, while close to home, BU faculty and employees have contributed more than $28 million. “It’s a campaign of all of us,” he said. “This is eloquent testimony to the generosity and commitment of the Boston University family, both here and around the world.”

As the campaign approached the billion-dollar mark last fall, the Board voted to raise the goal to $1.5 billion and extend the campaign.

“We’ve seen that our strength lies in our diversity—donors making gifts of all sizes, representing dozens of countries, and supporting countless different causes on campus,” Feld said. “This effort is bringing out the best in people, and really reinforcing the principles that make BU extraordinary in the first place.”

Students celebrated their 1,017,861 hours of service on Friday afternoon with a giant cake at the George Sherman Union. The volunteering drive was conceived by the Student Government in 2012 as a way to contribute, even though students’ dollars may be scarce.

“It is a remarkable contribution, and shows how the campaign has permeated into our student body,” Brown told the trustees.

One of those cutting the cake was Kyle Ortman (CAS’16), who started volunteering during his freshman year and is now a program manager with the Community Service Center. He’s not sure how many hours he’s logged in doing maintenance work at animal shelters, serving food to the homeless, and other activities.

“It’s definitely shaped who I am today,” Ortman says. “I look at the world a little differently. It teaches you to be more cognizant of people coming from all different walks of life, and more able to see their perspective.”

Students recently pushed past the million-hour goal with the annual Global Days of Service and Alternative Service Breaks. They logged their hours at the project web page.