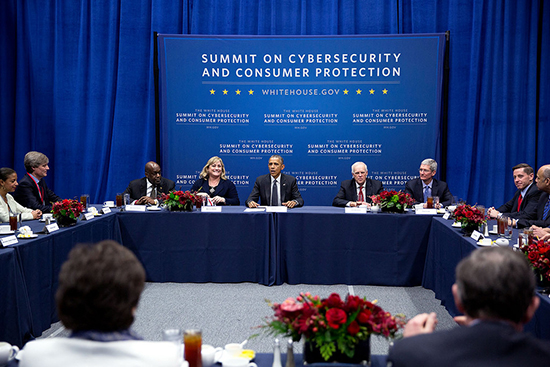 President Obama—here at a cybersecurity summit with business leaders in California last year—has a plan and proposed funding to beef up Internet security. Photo courtesy of the White House

That President Obama and congressional Republicans have been at loggerheads for eight years is hardly a news flash. But there are signs that the president’s final proposed budget might yield kumbayas over an issue vital to BU: research funding.

The president’s blueprint for the fiscal year beginning this October 1 would put “significant new investments” into research and higher education, according to the Association of American Universities (AAU), the elite consortium of leading research universities BU belongs to. In particular, studies of cancer, green energy, and cybersecurity are pegged as priorities in the budget.

While some Republicans have vowed to fight Obama’s plan, there’s a reality that School of Medicine cancer researcher Avrum Spira (ENG’02), Alexander Graham Bell Professor in Health Care Entrepreneurship and director of the Boston University–Boston Medical Center Cancer Center, notes about his field: “Everyone is touched by cancer—Democrats and Republicans.”

Agreement over what to fund and by how much is likely to cover more than cancer research, says Jennifer Grodsky, the University’s vice president for federal relations: “While Congress is unlikely to adopt the president’s approach to the budget, there is clearly bipartisan support for topics like medical research at the National Institutes of Health and bolstering cybersecurity.” Indeed, BU researchers were pleasantly surprised by December’s budget deal for the current fiscal year, which boosted research spending.

“The president continues to focus on areas such as Alzheimer’s disease, cancer, cybersecurity, and advanced computing, and BU faculty continue to be leaders in these fields,” Grodsky says.

Regarding cancer, Obama proposes $755 million next year for the administration’s “moon shot” effort (so named by Joe Biden, US vice president) to cure the disease, overseen by Biden, who lost a son to cancer last year. Spira, also a MED professor of medicine, of pathology and laboratory medicine, and of bioinformatics, attended a briefing with Biden’s staff the week before the president released his budget proposal, and he says the monetary sum is not as important (the proposal is just under a fifth of the National Cancer Institute’s $5 billion annual appropriation) as the attention it focuses on cancer research.

“I don’t think it’s big enough to ‘cure’ cancer,” Spira says of the budget proposal. “There’s not one cancer. There are many, many types of cancers. Some are going to be easier to cure than others.” But $755 million “will accelerate the pace of research into cancer,” including that of the prostate and the colon and breast cancers, which Spira’s lab researches.

The budget also “makes a very, very strong statement in support of clean energy research and provides some definite opportunities for BU,” says Peter Fox-Penner, a Questrom School of Business professor of the practice, markets and public policy and law, and director of BU’s new Institute for Sustainable Energy. The federal Department of Energy’s arm for applied research and development, he says, would receive “one of the largest increases in recent memory, a full 40 percent,” under Obama’s proposal.

“Much of this increase is in areas where BU’s research is competitive,” Fox-Penner says, “including building energy research, smart cities, energy data analytics, grid transformation, and energy conversion and storage.”

“I was delighted” by the cybersecurity initiative, says Azer Bestavros, a College of Arts & Sciences professor of computer science and director of the Rafik B. Hariri Institute for Computing and Computational Science & Engineering. He met last year with federal officials to discuss the institute’s cybersecurity research and understands that Obama proposes to give the National Science Foundation (NSF), the main funder of basic research in cybersecurity, $150 million for its secure-computing program. That would be a 16 percent jump and “one of the largest increases, in percentage terms, for a specific program at NSF,” Bestavros says.

That matters because the Hariri Institute has three projects funded by that program, two receiving $3 million each and one at $10 million. The latter, called the Modular Approach to Cloud Security (MACS), seeks to develop a cloud computing system with individual security setups for each of its component parts, rather than cloud computing’s current standard of a single firewall. The project is a joint effort by BU, MIT, Northeastern University, and the University of Connecticut.

Sharon Goldberg, a CAS associate professor of computer science, is a MACS researcher and is also engaged in other work that might benefit from any new funding. She says the Obama administration’s strategic plan for cybersecurity research emphasizes cryptography, and “most of my research is concerned with understanding how cryptographic mechanisms can be used to secure core internet protocols.” (Last fall, she and her team uncovered a potentially devastating glitch in the software and rules that synchronize clocks on tens of millions of computers.)

The cybersecurity budget increase is aimed in part at supporting the administration’s Federal Cybersecurity Research and Development Strategic Plan. The plan’s goals include countering and ultimately reversing hackers’ “asymmetrical advantages” in breaching security. Tanya Zlateva, dean of Metropolitan College and a professor of the practice of computer science and education, says those advantages exist because “the attacker is potentially anybody on the web interested or/and able to breach the defense,” whether a nation, organized crime, or an individual. “The defense team has to anticipate and respond to any type of attack, pitting its limited resources against the large number of varied and typically unknown adversaries.”

“Overall, the strategic plan is a succinct and well-articulated road map,” says Zlateva, who also directs MET’s security programs. With its cybersecurity strategic plan, the government has made the issue “a priority for science and society.…The clear message is that there is no single solution or perfect security, but we are all in this together and contribute,” from academia to law to industry to individual computer users.

Whether the plan contains oversights will depend on its implementation, she says.

While applauding the cybersecurity budget, Bestavros says the strategic plan doesn’t address one problem: “We academics know how to build bulletproof systems and networks. Yet our designs are not adopted by industry because it would make their products more expensive and hence less competitive in the marketplace.…Unless and until the government puts in laws and regulations that make building secure software an expectation, we will continue to suffer from this.”

The politics and economics are complicated, he concedes. Industry fears that regulation stifles innovation were more valid when information technology was in its infancy. “I think we have reached a point where we should expect the software development industry to have matured, but that opinion is not shared.”

While applauding the budget increases in all of the president’s prioritized disciplines, the AAU remains distressed by government spending caps it says are constraining research funding overall. Also, Obama has proposed ways to pay for his investments “that Congress will not seriously consider,” the AAU forecasts. But the organization also praised Obama for proposing to boost federal financial aid.

And that, Grodsky says, is “a goal we share at Boston University.”