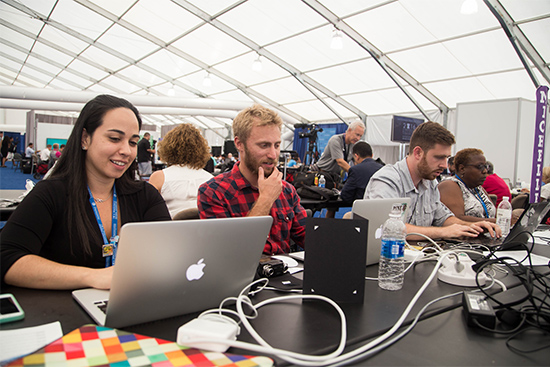 Andrea Asuaje (COM’17) was in the crowd at the Wells Fargo Center in Philadelphia Monday evening, the first night of the Democratic National Convention, reporting for the Boston University News Service as protesters, many of them Bernie Sanders supporters, loudly booed speakers like Massachusetts Senator Elizabeth Warren. When First Lady Michelle Obama came to the stage, Asuaje says she expected a similar reaction from the protestors. She was wrong.

“Earlier in the night, the speakers were competing for attention over the protesters,” says Asuaje, managing editor for the BU News Service. “But when Michelle spoke, it was almost electric. People loved her speech. The whole room was enamored by her.”

Asuaje is one of five COM students covering the four-day Democratic National Convention, which wraps up tonight. They are joined by BU News Service’s faculty advisor Michelle Johnson, a College of Communication associate professor of journalism. Last week, Asuaje was in Cleveland, Ohio, with two other students reporting from the Republican National Convention. The students’ work is being published on the BU News Service website and its social media channels, including Facebook, Twitter, and Snapchat.

Last week, the students covered Donald Trump accepting the nomination at the Republican National Convention, and they interviewed and photographed Trump supporters and protesters. This week, they have covered the widely publicized walkout by Sanders supporters, Boston Mayor Marty Walsh’s address in which he discussed his struggles with alcohol, former President Bill Clinton’s rousing personal speech about his wife’s experience, and the formal nomination of Hillary Clinton for president.

COM students who were interested in covering the conventions had to apply for media credentials back in April. Asuaje, a graduate student at COM as well as a graduate fellow at WBUR, says she was pleased when she learned she had passed the applications’ first rounds, which involved a background check by the Secret Service.

To prepare for the back-to-back convention coverage, the team had several brainstorming sessions before leaving Boston. They met with R. D. Sahl, a COM associate professor of the professional practice and a former local Emmy-winning television anchor who is a veteran political reporter, and John Carroll, a COM assistant professor of mass communication, media analyst for NPR’s Here & Now, and senior news analyst at WBUR, for tips on what to expect.

Asuaje says while the two conventions have differed in their messaging and credentials processes, both have required long days of work and an ability to report on news as it breaks. “You have an idea of what you want to do before you get here, but the news is happening right in front of you and you just have to go with it,” Asuaje says. “You are on your feet all day long, and it’s exhausting because it is kind of like covering a breaking news event for four days straight, plus you have to appeal to your local audience and pick up on trend stories.”

Reporting live from the conventions has also taught Asuaje to be flexible. A few stories she had planned to cover, such as non-white millennial conservative voters and College Republicans at the Republican National Convention, didn’t work out because either she didn’t have enough sources or because the subjects were unavailable for interviews.

But that hasn’t stopped Asuaje from pursuing stories that interest her. She is hoping to write an overview of both conventions and a story focusing on the importance of millennial voters, using data and information gathered at forums hosted by the Institute of Politics at Harvard. “It’s really fascinating to think about my generation and future generations and the role we play in national politics,” she says.

For all of the convention coverage by the BU News Service, click here.

There are 4 comments on BU Covers the Democratic National Convention