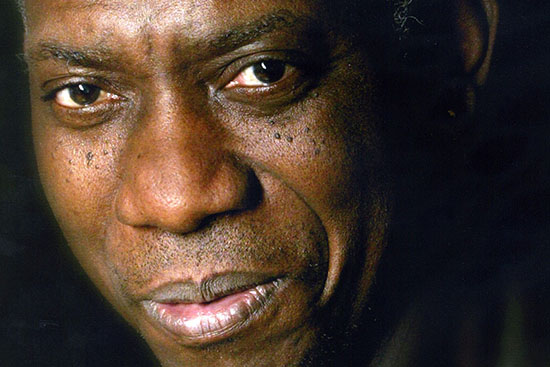 Many of Yusef Komunyakaa’s poems draw on his experiences growing up in the rural segregated South and later serving in Vietnam, where he earned a Bronze Star. Photo by Tom Wallace

Growing up in rural Bogalusa, La., in the 1950s, Yusef Komunyakaa fell in love with books. His father, a carpenter, was illiterate, able only to sign his name. But he instilled in his son a respect for the importance of precision: one had to know how to use one’s tools, Komunyakaa later told a reporter so they didn’t work against you.

The early lesson served him well. Over a career spanning nearly 40 years and 16 collections of verse, he has received most of the literary honors bestowed on American poets: a Pulitzer Prize and a Kingsley Tufts Poetry Award for 1994’s Neon Vernacular: New & Selected Poems 1977–1989, a Ruth Lilly Poetry Prize, a Wallace Stevens Award, and fellowships from the National Endowment for the Arts.

Tonight, Komunyakaa will read from his work at this fall’s Robert Lowell Memorial Poetry Reading at the Castle. His largely autobiographical work has been hailed for addressing the complexities of the human condition. Writing in the New York Times, Bruce Weber noted that Komunyakaa’s poems “deal with the stains that experience leaves on life.”

In Komunyakaa’s hometown, even the local library refused to admit African Americans. He discovered poetry in elementary school and was entranced by the language in the Old Testament. As a high school senior, he wrote his first poem (100 lines), for his graduation ceremony.

“I was too shy to read it out loud,” recalls Komunyakaa. “In fact, by that time, I had fallen under the influence of James Baldwin and began dreaming of essays and short stories. But I continued to read poetry.”

He joined the army and served in Vietnam, working as an information specialist and correspondent for a military newspaper and earning a Bronze Star. Poetry continued to exert a pull: he’d brought with him Donald Allen’s The New American Poetry, 1945–1960, and he read the poems repeatedly. It would be 14 years before he could write about what he had witnessed in Vietnam.

While much of his work is autobiographical, he says, “for me, poetry is a composite of questions, not answers. Sometimes the poem is where the autobiographical converges with what one can risk to the imagination. Otherwise one is condemned to be a secretary of the heart. And for me that seems a rather limited place to dwell. We attempt to encompass the past in order to embrace the present and the future.”

Many of Komunyakaa’s poems are about his father. In “My Father’s Love Letters,” he writes: “My father could only sign/His name, but he’d look at blueprints/& say how many bricks/Formed each wall.” In “The Whistle,” it’s about the factory whistles that summoned his father to work each morning, sent him home for lunch and back to work, released him at 5 p.m.

Probably best known for lyrical, moving poems recounting his experience in Vietnam, he began writing about the war “before I knew what I was doing,” he says. The first, “Somewhere Near Phu Bai,” came to him while he was fixing a house in New Orleans in 1984. In arguably his most famous poem, and one of the most anthologized, “Facing It,” Komunyakaa writes about an African American vet standing at the Vietnam Veterans Memorial. It opens: “My black face fades,/hiding in the black granite./I said I wouldn’t,/damnit: No tears./I’m stone. I’m flesh” and goes on to recount how that visit unleashes a flood of memories, including a “booby trap’s white flash.”

The war poems address the psychological anguish of so many Vietnam vets. Was what he had witnessed in Vietnam cathartic? It was not, he says. “If anything, perhaps all the images and sensations came to the forefront. It was there in the bare light, and had to be dealt with.”

Komunyakaa, currently a senior faculty member in New York University’s creative writing program, has taught creative writing for decades. He says he urges his students to write daily, using his preferred method—pen and paper. He also encourages them to read everything aloud. “Ask this question: does the feel of language come from the head or the belly, the soul or the spleen? Learn to listen with pleasure. Don’t be afraid to get lost in the woods.” A poet who believes deeply in the importance of revision, he says that too many young poets fail to understand how important it is—“an acute part of the process.”

Nearly 40 years after his first collection, Komunyakaa still tries to surprise himself. “I love when I feel discovery,” he acknowledges. “I don’t wish to stay in a single frame…I do recognize beauty, and I hope that my poetry celebrates and confronts.” He’s at work on a new three-act play, and has written lyrics that have been recorded by the Tomás Doncker Band. And in keeping with his long habit of working on several projects simultaneously, he has returned to work on part two of The Wishbone Trilogy (part one, Taboo, appeared in 2004), as well as a “longish” poem, “Requiem,” about the history of New Orleans, parts of which have been published, and a new collection, Night Animals.

Joining Komunyakaa at tonight’s Lowell Reading is Creative Writing Program alum Vanesha Pravin (GRS’09). Her first poetry collection, Disorder (University of Chicago Press, 2015), was also inspired by personal history. The poems chart her family’s travels over a century and across four continents and the ensuing sense of dislocation that pervades their lives. Pravin says she had long listened to her mother tell stories about her family and by her teen years knew she wanted to write a book about them. The collection began to come together when she came to BU. She drew on her mother’s journal for material. Walking across the BU Bridge one day, she says, “it just hit me—the feeling of how to weave it all together and make it work.” The project came together rapidly. “Since much of the material had been marinating for years, when I started the first draft, it just flowed through in a six-week period,” she recalls. “In hindsight, it felt very dreamlike, as if a space had opened up and the subconscious took over.” Over the next several years, she revised the poems.

Pravin is quick to say that the book is neither a documentary nor an ethnographic study. “Most of the incidents in the book are based on fact, but they’re captured from the perspective of one person—my mother—so, of course, the same material might have been interpreted differently by another person,” she says. Much of it focuses on “the disorder of memory and how things shift and distort through remembrance.”

Although she’d begun writing poems as a child, by the time she was a young adult, she’d abandoned poetry, discouraged by what she saw. “It seemed to be a very difficult vocation, and the poetry world looked like an impenetrable fortress,” Pravin says. “I didn’t see a lot of minorities with working-class backgrounds flourishing in that world, so it just didn’t seem practical to pursue something where the odds were already stacked against me.”

That all began to change when the 24-year-old Pravin was working as secretary and met published poet Mary Armstrong, who worked at the same place. She realized that it was possible to have a day job unconnected with poetry and still be a serious poet. She began working on poems nights and weekends and submitting work to journals, collecting the inevitable rejection slips.

When she came to BU for graduate work, Pravin was “pleasantly surprised, shocked even,” at how generous BU professors were with their time, and their willingness to give extensive feedback. “At BU, you are taken seriously as a writer, and I felt lucky that I didn’t have teachers who were dismissive of student work,” she says. BU “opened up a sense of literary community,” providing friendships that have helped sustain her through difficult times.

Her poems range from short lyrics to longer narrative poems. She never decides the length of a poem at the outset. “I feel my way through it and then some instinct tells me to stop or cut or expand,” she says. “Sometimes, I can only find the appropriate length in the revision process. Sometimes the poem gets buried and you have to dig it out from the mass of text. You might have written a page and a half, but the poem only comes alive in the third stanza, and the rest is superfluous, so you ruthlessly cut.”

Now at work on her second collection, she says that although she’s pushing herself in a different direction with her new poems, the older and the current work are united by “an attention to sound and rhythm, coupled with a strong faith in the logic of imagination and dreams.”

Pravin vividly recalls the first Lowell Poetry Reading she attended as a student: Nobel laureate Seamus Heaney and Peter Campion (GRS’00) read from their work. “I never expected to be a reader in the series,” she says, “so it’s a little surreal to be a part of it.”

Robert Pinsky, a College of Arts & Sciences professor of English and creative writing and a three-time US poet laureate, sees similarities in the two poets’ work, despite the generational difference. “The mix of American culture—shifting, hypercharged, house-of-mirrors—energized our country’s poetry in ways beyond categories of predictions: a creative fire epitomized, in their generations, by the work of the master Yusef Komunyakaa and the exciting first-book poet Vanesha Pravin.”

The Robert Lowell Memorial Poetry Reading, with Yusef Komunyakaa and Vanesha Pravin, is tonight, Thursday, October 15, at the Castle, 225 Bay State Rd., at 7:30 p.m. The event, presented by BU’s Creative Writing Program, is free and open to the public. A book signing and reception immediately follow.