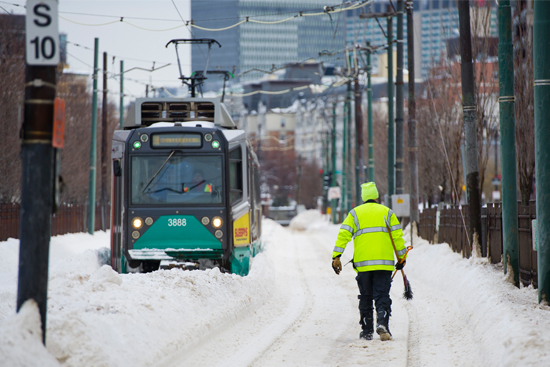 From private cars to public transit, much of Boston has been snowed in of late. Photo by Cydney Scott

Need we tell you it’s been a hell of a winter?

For an explanation of why, and what it might portend, BU Today consulted Bruce Anderson, a College of Arts & Sciences professor of earth and environment, who has researched global temperatures.

BU Today: This year’s snowfall of 76 inches and counting is way above normal—31 inches more than what we average during a typical winter.  Why aren’t we getting normal this year?

Anderson: I haven’t seen a good analysis of it yet, and it will probably take a few months to come to a good understanding. The short answer is that the storm track has settled over us, and we’re seeing a continuous influx of storms into our region. As an aside, be aware that it is actually very unlikely to get close to the “normal” amount of snow (or rain or temperatures) in any given year. This is an old image for Boston, but it shows year-to-year deviations in snow:

Note how few of the bars are short—i.e., near normal. That just means that nearly every year is going to be different than normal.

Is this record snowfall an example of climate change?

These are singular weather events, not changes in climate (i.e., changes in the expected weather we have received in the past versus what we might receive in the future). That said, there is the expectation that weather events like these will become more common in a warmer world, so think of these events as a prologue, or an example, of what we might expect in the future for our region. But it is hard (and confusing) to attribute singular events to climate change. As for why, it turns out that as the atmosphere warms, it can contain more water vapor. When that vapor condenses as precipitation, it means that there is more water falling to the ground. The key will be temperature: above 32 degrees Fahrenheit and it falls as rain, leading to less snow; less than 32 Fahrenheit and it falls as snow, leading to (obviously) more snow. Given that Boston’s average winter temperature hovers around 32, we may see more overall precipitation as a result of climate change, but depending upon the particular temperatures during a given year and storm, it could be more rain and less snow or more snow. The heavy snowfall in record short time has more to do with seasonal climate variations, again related to where the storm track settles for a while, and hence where the storms traverse.

Last winter was also very snowy, albeit within a less compressed time frame. Can we expect to see more winters like this in coming years, or is this likely to be an aberration?

This question isn’t necessarily related to climate change or seasonal climate variability, but to what we call inter-annual-to-decadal climate variability. For our region, the conventional wisdom is that the North Atlantic Oscillation, fluctuations in atmospheric sea pressure, controls the jet stream and storm track across our region, and that is related to slow changes in the ocean temperatures of the North Atlantic, as well as possibly changes in sea ice over the Arctic. But in fact, we are also affected by multiple other modes of climate variability. The take-home message from this Journal of Geophysical Research paper is that there is “a lack of significant relationship between winter precipitation over the northeastern United States and large-scale modes of climate variability.” Predicting snowfall in New England is really difficult.

They tend to be on a day-to-day basis (clear, cold conditions versus cool, wet conditions, like during a nor’easter). But in any given season, we can have a string of both types of weather patterns as the storm track slowly shifts—for instance, persistent cold air coming down from Canada for a period of days or weeks, followed by a shift in the storm track, which brings storms up from the South or possibly from the Great Lakes.

What advice would you offer public and transit officials trying to provide services in such adverse conditions?

Save for a rainy day. In other words, there are going to be years where we don’t end up blowing through our snow budget, and have a surplus; if we then go and spend that money elsewhere, it’s not going to be around when we really need it. Climate is variable; some years are good, some are bad, and most important, past is not prologue. Just because the last two years were bad doesn’t mean the next year will be as well. Conversely, when things have been going well, we still have to have some expectation that they can turn bad quickly.

What’s Up with All This Snow?

There are 2 comments on What’s Up with All This Snow?