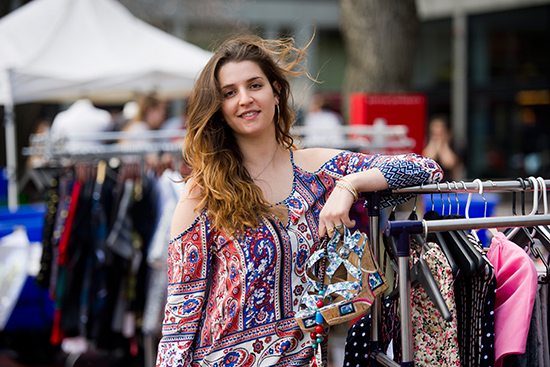 Self-proclaimed fashionista Alexandra Shadrow was tired of being ripped off by local consignment stores when she tried to sell her old clothes, and wanted to avoid listing her address on Craigslist. So three years ago Shadrow (CGS’12, COM’15) decided to create the BUtiques Facebook page to sell her shirts, jeans, and dresses exclusively to other BU students.

“When we launched on Facebook, we had 2,000 girls within three months,” Shadrow says. “I thought, BOOM! I realized that it was something that a lot of girls needed. Now a third of BU girls use us.”

Shadrow’s free online marketplace, now called UNItiques, got a big boost earlier this month, taking home first place and more than $96,000 in cash and prizes at this year’s New Venture Competition. Sponsored by the Questrom School of Business Buzz Lab, the contest, now in its 15th year, helps young entrepreneurs turn ideas into viable business plans, through advising and presentation coaching, as well as by awarding funding.

Shadrow’s first-place win netted her $10,000 in cash, $20,000 in rent courtesy of Cummings Properties, $5,000 in legal services from WilmerHale, and $60,000 worth of Microsoft BizSpark cloud hosting. The win also came with three months of space at Coalition, a local workspace for entrepreneurs, and a fast track to the second round of the upcoming MassChallenge competition. Shadrow also won the audience appreciation award at the competition, which carries an additional $1,000 in cash.

“I did this weird silent scream when I won,” Shadrow says. “The other teams were amazing, but I went last and gave a demo of my website, went over our marketing strategy, and talked about the events we hold on campus.” She plans to use the money to create a mobile app for her business and to improve its credit card services. “It keeps my dream alive,” she says.

Shadrow started to grow her business from its Facebook beginnings after attending the Entrepreneurship program’s 10-week Startup Camp in 2013, where she won office space at Buzz Lab. She quickly realized that she needed to hire a developer who could build the UNItiques site to her specifications—she wanted users to have a strong search function and the ability to post their own photos. Developing the website proved “by far the biggest challenge,” Shadrow says. She laments that she wasted a lot of “time and money” with a couple of developers who didn’t work out before finally finding one who worked closely with her to create the current site.

Since then, her team has grown to 20 employees, who work all over the country, partnering with other schools. One employee handles metrics, another is charged specifically with coding. The website currently has more than 3,600 users and has expanded locally to Suffolk University, Berklee College of Music, and Framingham State University, as well as Loyola Marymount University in California. Plans are in the works to expand to Harvard, Boston College, and Emerson by next fall.

UNItiques is free to users, and Shadrow says the site makes its money by partnering with, and selling, local designers’ duds on the site. “We sell under-the-radar brands, like Allston’s Mass Apparel, to our users for at least 40 percent less,” she says.

Want proof that UNItiques offers real value for discerning shoppers? Currently, a knit crew neck J.Crew sweater is available for $5, while an Alexander McQueen cotton scarf is selling for $65. Shadrow says that 90 percent of UNItiques’ customers are women, but men can also find apparel (a Lacoste polo shirt is listed at $20). The site now also sells furniture, electronics, textbooks, Halloween costumes, and even miscellaneous items: Hula-Hoop, anyone? From February 2014 to February 2015, sellers earned $11,400 for 1,980 items, according to Shadrow.

One of the judges at this year’s competition was BU overseer Kathleen Healy, a member of Golden Seeds Boston and Launchpad Venture Group, who called UNItiques a “great concept.” Josh Weiss (MET’82), an entrepreneurial fellow and a Questrom School of Business lecturer in organizational behavior, who is also a Launchpad Venture Group member and another of this year’s judges, said, “We liked that UNItiques solves a real consumer problem. It’s helpful and also solving a real business need and creating a marketplace where they could actually make revenue.”

Second prize at the competition went to Barron Roth (ENG’16) and Luke Sorenson (ENG’16) for their creation of an iOS and Android app called Downtyme, which allows users to match their schedules with friends and then make plans. Third prize was awarded to Joanna Kimszal (CAS’15) and Mara Onita Lenco (CAS’15), inventors of Sub-It, a peer-to-peer student housing marketplace website used for short-term subleasing.