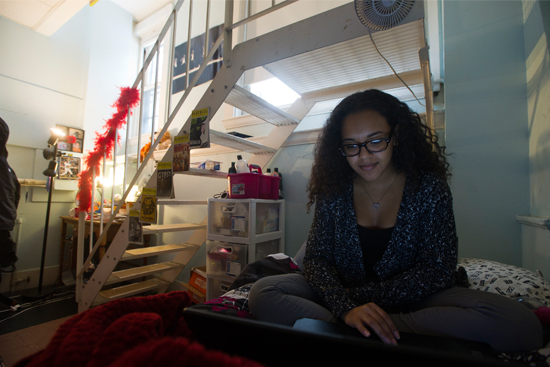 Beleaguered, cash-strapped Blanche Dubois, the fading Southern belle in Tennessee Williams’ A Streetcar Named Desire, has nothing on Alexis-Brianna Felix. Faced with leaving BU last year because her family couldn’t cover costs, despite what she calls the University’s generous financial aid, Felix (COM’16), like Blanche, relied on the kindness of strangers (along with some family and friends). She did it in a way Blanche never heard of: crowdfunding.

An acquaintance tipped Felix to the technique, which entails raising money from large numbers of people, usually online. She hesitated, because she “didn’t want to feel like a charity case,” but scholarships and borrowing from family fell short of what she needed, and she was denied private loans for lack of credit and a cosigner. Fearing she would have to drop out despite excellent grades, she swallowed her reservations and tried crowdfunding site GoFundMe.com.

“My original goal was the $5,000 I needed to remain at BU for my spring 2014 semester,” Felix says. She hit that target in just 27 hours—and money kept pouring in from high school classmates and their families, former teachers, and friends of her family. After her happy-ending story hit the media, strangers started donating. In all, Felix raised $9,761, with the extra funds helping to cover last semester’s expenses, plus bus fare home to New York.

The University, which awards $195 million in financial aid to about half the undergraduate student body, does not track the number of crowdfunding Terriers. But “students have always sought support from family and friends,” says Christine McGuire, associate vice president for enrollment and student affairs. “Crowdsourcing just provides a public platform to the exchange.”

Using GoFundMe seems equally logical to Breanna Allen (CAS’17). “People crowdfund for money for a new shiny sports car. But in my case, I would be crowdfunding for an education to make a difference in the world,” says the premed student. Allen works part-time and is contributing a percentage of her paycheck each week to her account on the site. Her mom is a single parent, a Realtor struggling to put two daughters through school while assisting her brother as well, Allen says.

“It’s hard seeing how difficult this is on her, and I’m doing everything I can to help out,” she says. “It’s very tough being a student from a low-income family trying to get an education.”

Rhyanne Lynch (CGS’16) turned to GoFundMe after a friend covered some medical expenses using the site. The San Diego resident figured that “if someone wanted to help me go to college…” Several someones did, to the tune of $7,600, after GoFundMe deducted its fee from her haul. (Her mother and stepfather’s income disqualified her for financial aid, Lynch says; most of her college expenses are being covered by loans from her stepfather and a bank.)

Lynch asked for a year’s tuition on GoFundMe, but she’s “ecstatic” with the far smaller amount she received. “I figured there was no harm in asking. The reality of the situation was I wasn’t expecting family and friends to raise $42,000 for me.”

Just over 20 people, mostly family and family friends, but also a half dozen anonymous givers, donated towards her schooling. Aspiring to work in financial advising, Lynch concedes that she “could have gone to a state school,” which would have been less costly, “but I figured I’d get much more opportunities here, leaving with this degree.”

Lynch was familiar with GoFundMe, and she says its cast-your-net-far approach was preferable to direct appeals to potential donors, who might have felt pressured to give. And paying for the second, third, and fourth years at BU? “Oh, my goodness,” she says. “I’m going to apply for more scholarships, grants. I hopefully will get more, based on grades and whatnot. And I will do GoFundMe again.”

“Since this is a rigorous school, once people see that I just don’t fail out the first semester,” she adds, “maybe they’ll be a little bit more inclined to help me with tuition.”

That these students work hard with their crowd contributions brings up a touchy, potential downside to this fundraising route. Allen was rankled by insulting messages after she posted her account on GoFundMe. One correspondent said “that if I tried harder in school, I wouldn’t be in this position because I would have received academic scholarships” and “that I wasn’t smart enough and should just transfer to a community college.” (In fact, she was smart enough for early decision admission to BU and is relying on financial aid and loans, she says.)

“I was in the top percentage of my high school class and had a very high graduating GPA,” Allen says. “Do not tell crowdfunders that what they are doing is wrong. Crowdfunders are brave for asking for help when they need it. It is not easy to tell the world that you don’t have money to pay for school.…I am here and I am fighting to pursue my dreams, so do not tear me down for asking for help.”

Students Turn to Crowdfunding to Pay for College

Students Turn to Crowdfunding to Pay for College
12
share this