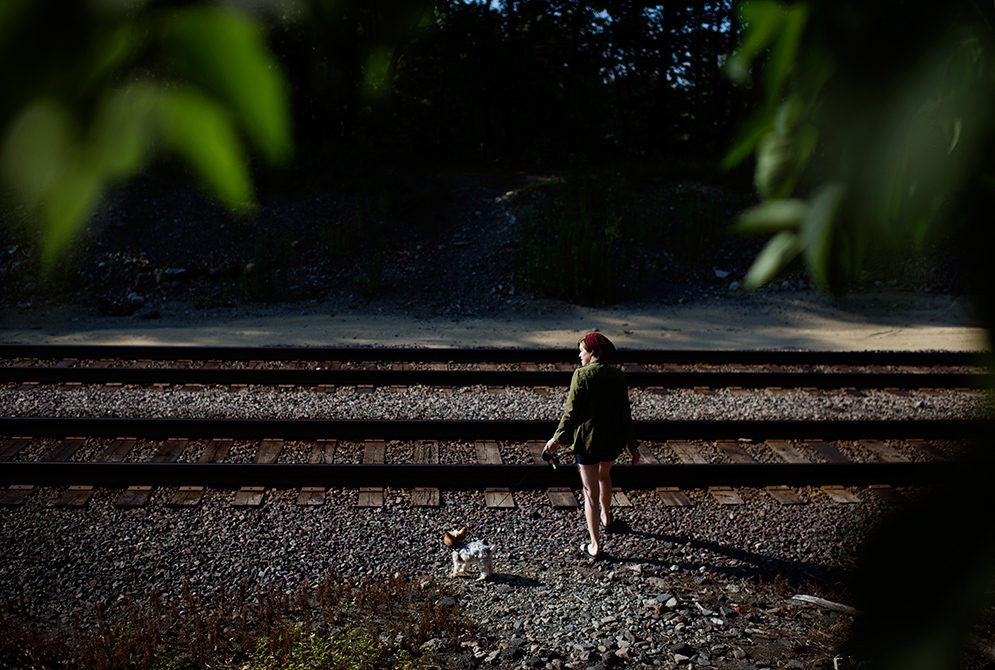 Kayla walks with her dog, Jake, near her home in Watertown, Mass. “EDS is an invisible disability,” she says, “so even though I’m sick and struggle to do things most people take for granted, I look just like everyone else. I don’t have any outward differences that alert the public to my disability, and because of that I often face judgment.”

BU recently welcomed 3,625 freshmen, each with a unique journey to campus. Photojournalist Jackie Ricciardi wanted to capture them as they prepared to launch this new chapter. So over the summer, she traveled from Minnesota to New York to Boston’s suburbs to photograph several members of the Class of 2019. They welcomed her into their homes and shared their dreams, fears, and the ways their families have shaped their lives. Parents spoke candidly about their anxieties and aspirations for their children. In our series “Rite of Passage,” BU Today brings you four students’ stories.

Kayla Furbish was 14 when she was diagnosed with Ehlers-Danlos syndrome (EDS), a rare, inherited connective tissue disorder caused by a defect in the structure or production of collagen or the proteins that interact with collagen.

Since then, Furbish (CAS’19) has had to deal with the daily joint dislocations, as well as gastrointestinal, cardiovascular, and neurological problems the syndrome causes. She’s undergone numerous surgeries, had infusions, and learned to live with chronic pain. Along the way, she’s had to give up a lot of things she used to do: tasks as simple as picking up a gallon of milk are now hard for her. And she says that because Ehlers-Danlos syndrome is outwardly invisible, she appears healthy even though she’s often sick and struggling to accomplish tasks most people take for granted. “I look just like everyone else,” she says. “I don’t have any outward differences that alert the public to my disability, and because of that, I often face judgment.”

When it came time to look at colleges, the Watertown, Mass., native knew she needed to stay nearby so she could continue to see her physical therapist and her doctors. Furbish says she knows there are going to be challenging times ahead as she struggles to keep up with everyone else, but she’s determined to “find the things that work for me.”

The double major (English and psychology) says she dreams of becoming a novelist some day, but will most likely pursue a graduate degree in psychology after graduation. 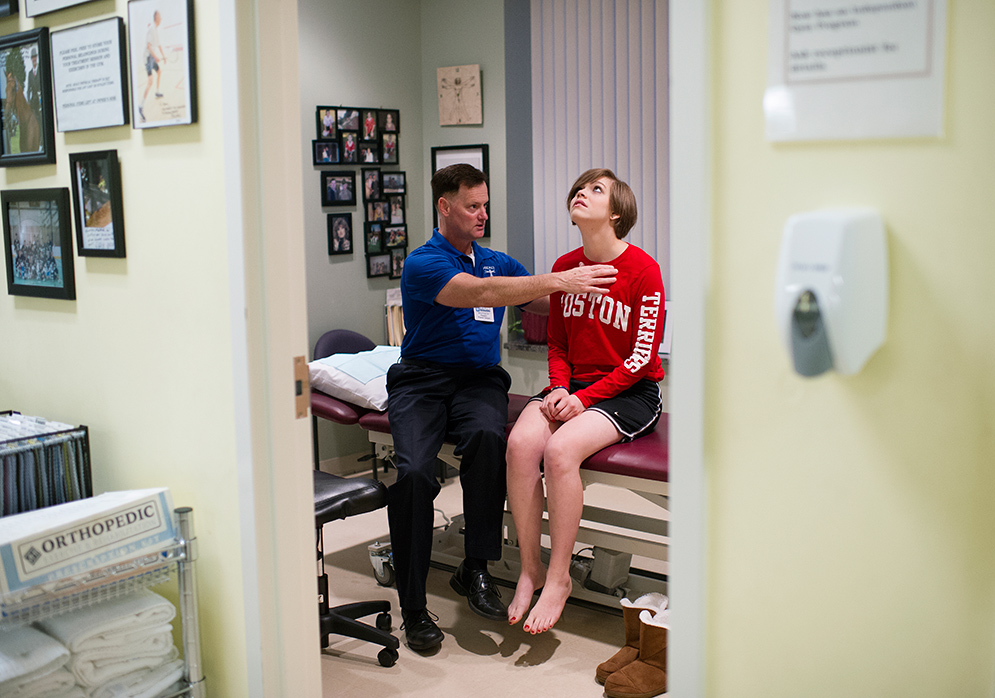 Kayla and her mother rise before dawn every other week to go to Providence, R.I., for a 5 a.m. physical therapy appointment. Her physical therapist, Michael Healy, specializes in treating people with EDS. “Having doctors and people who are familiar with my case close by was a big reason I wanted to stay local” for college, says Kayla. 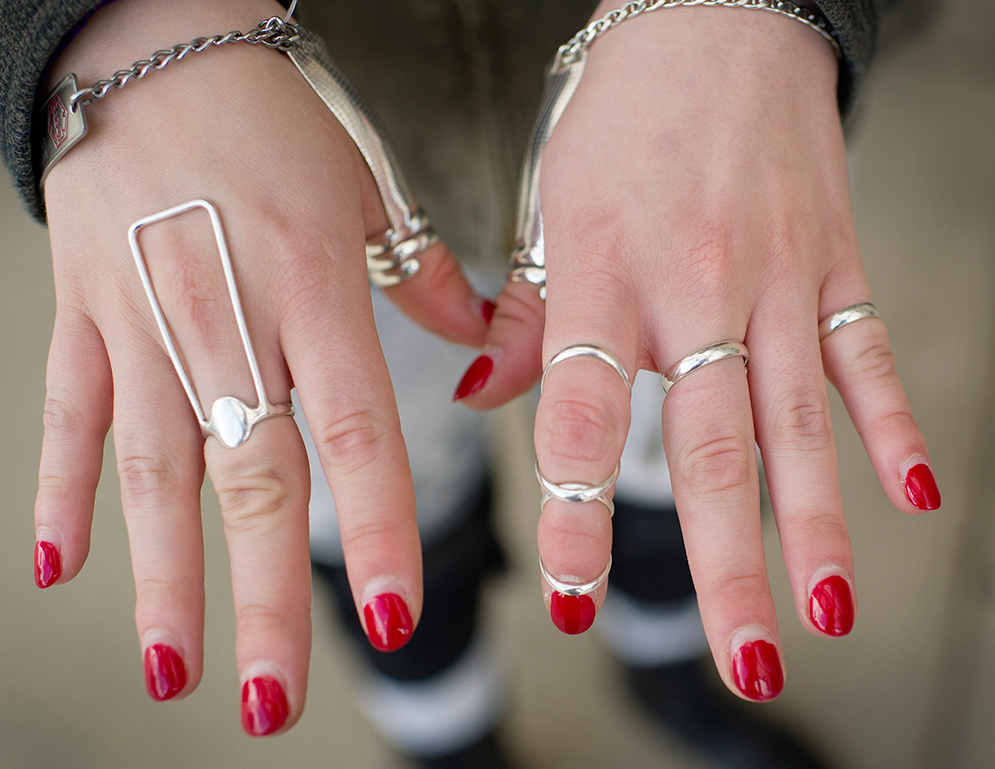 Kayla’s silver ring splints stabilize her hands and help her to write and type more easily.

“ I try to hold everything together externally rather than internally because it’s not really there genetically.” 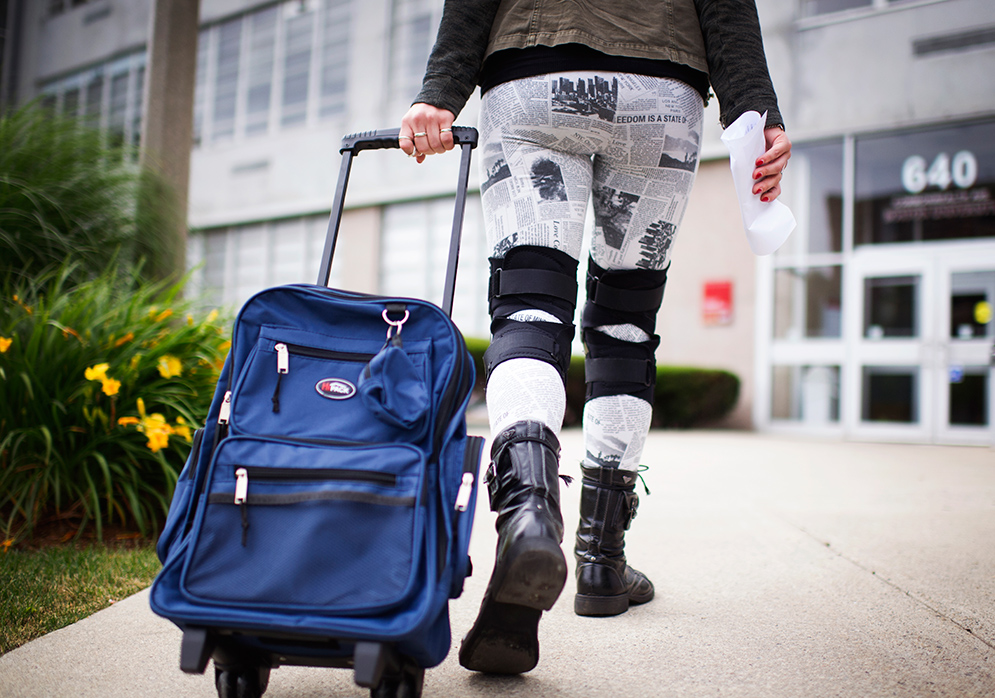 Kayla takes a trial run before the semester begins to see if she can make it to her classes on time and that her backpack isn’t too heavy. “I know there’s going to be times that are challenging—like when I’m walking around campus and my knees or back are hurting, and I feel like I have to push myself to keep up with everyone else.” 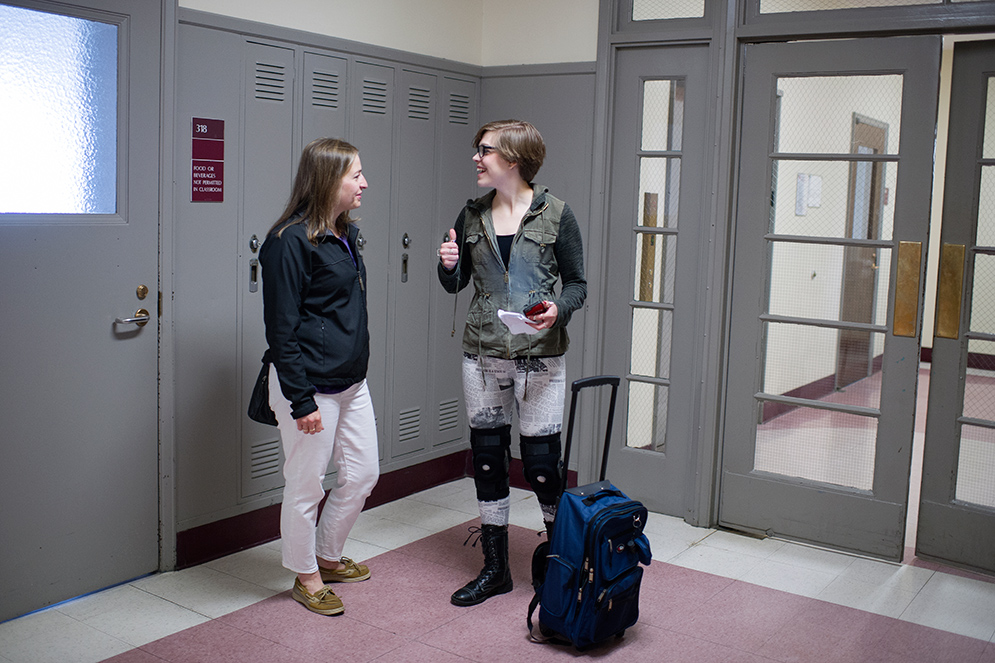 Kayla gives her mother, Cindy, a thumbs-up after making it to class with a minute to spare.

On Challenges of Life at BU

“ I don’t want to start falling behind, or making myself sicker or injured because I’m trying to keep up with everyone else.” 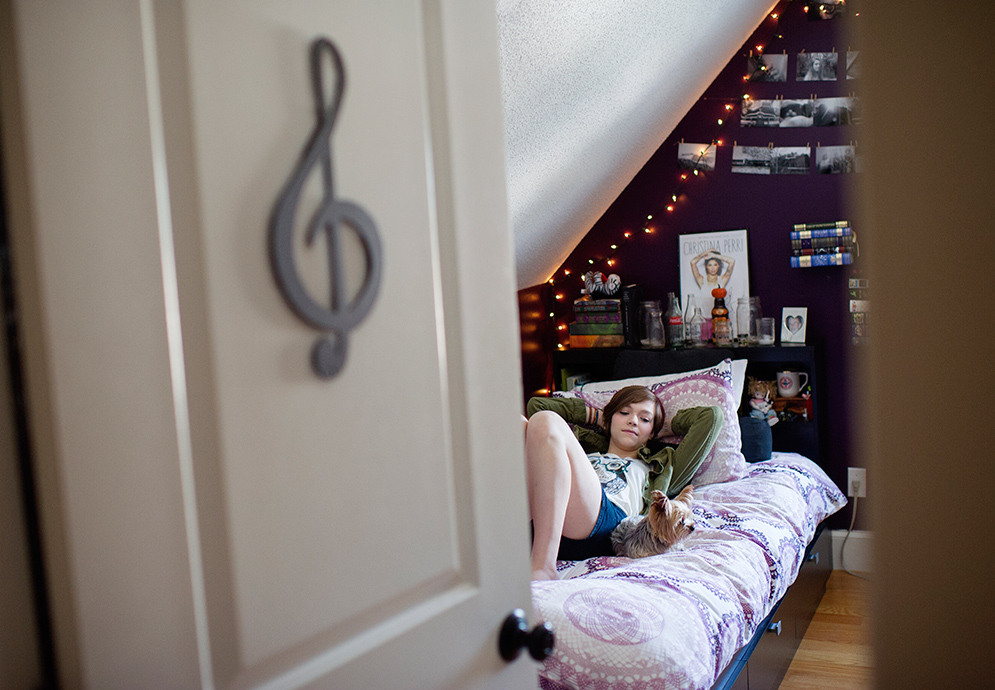 Kayla and her dog, Jake, at her home in Watertown, Mass. Living with EDS makes life challenging, but she’s determined to work through the struggle. “I’m defintely excited to get to BU,” she says. “I can’t wait to meet new friends, take classes that focus on what I’m interested in, and start working towards what I want to do in life.” 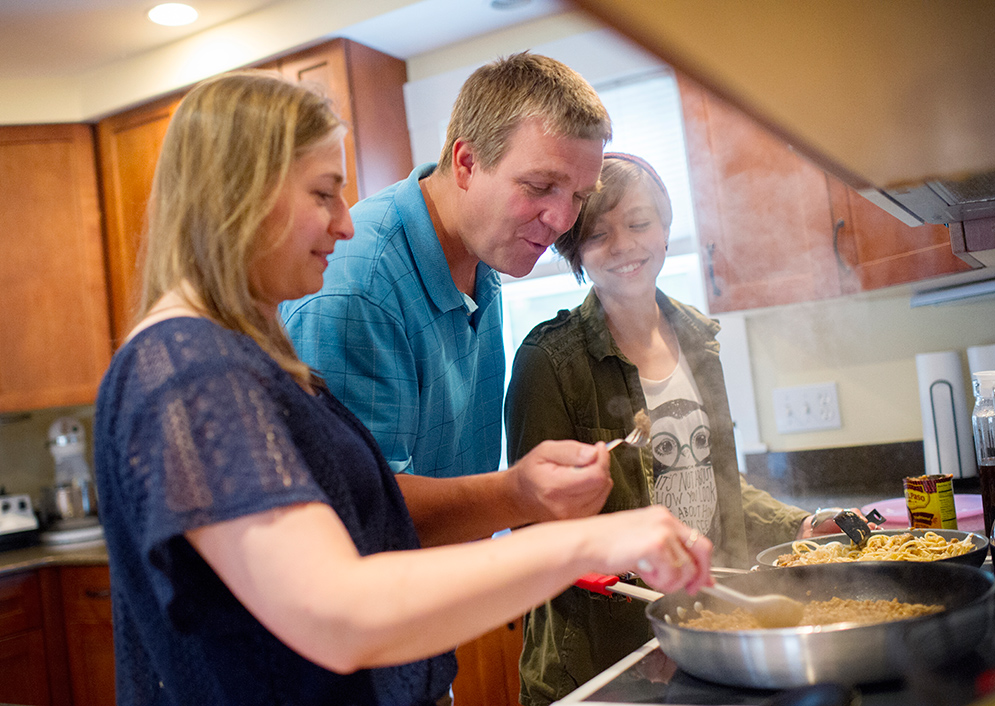 Kayla’s father, Del, sneaks a taste of the dinner she and her mom are preparing before she leaves for BU. Kayla says she has to be very careful about what she eats because EDS makes it difficult for her to digest food.

On Worrying About Her Daughter

“ I worry about her falling apart.” 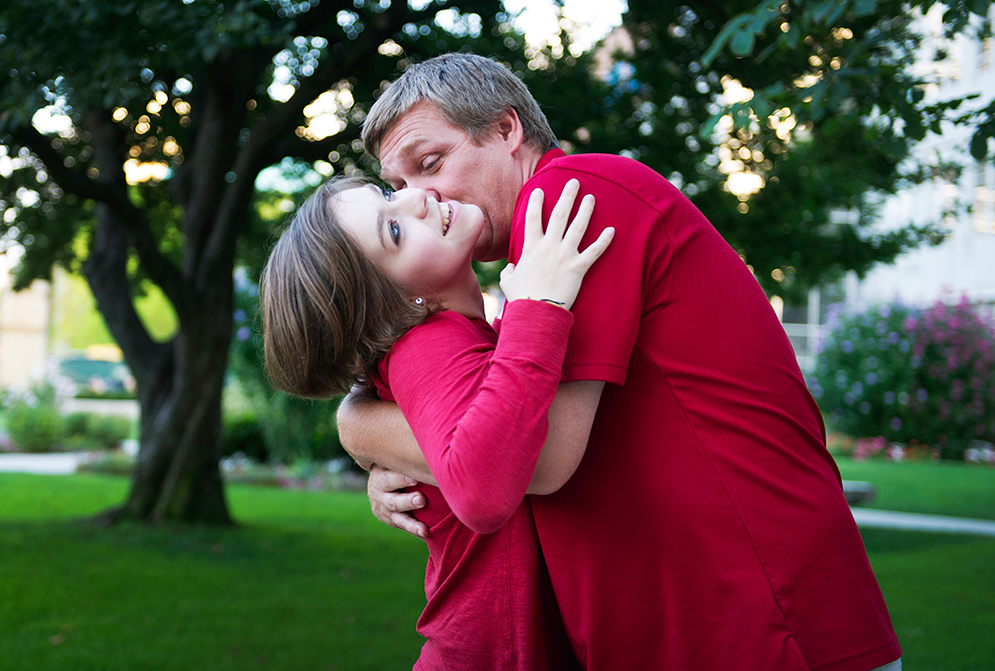 Kayla says good-bye to her father, Del, at BU. “It hasn’t really hit home for me yet,” he says, “because she’s going to be so close and we’ll get to see her often.” She’ll always have home to return to, he says.

There are 31 comments on Rite of Passage: Living with Chronic Pain