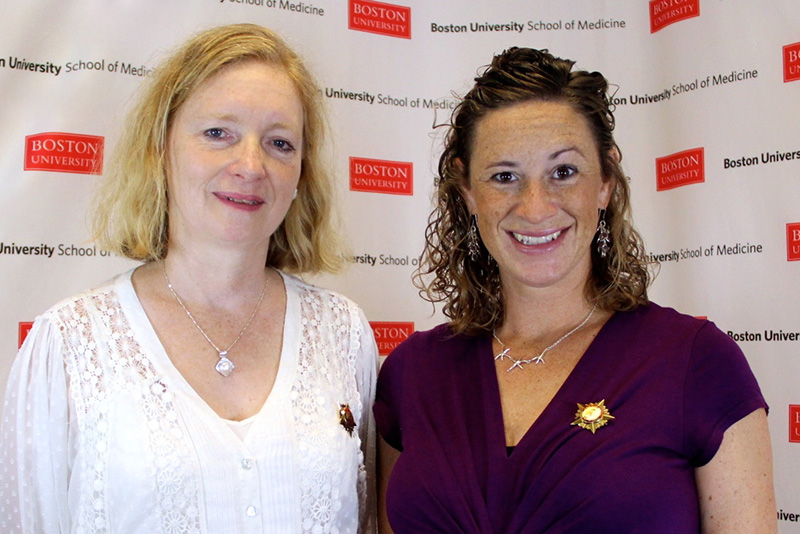 Carine Lenders, associate professor of pediatrics at Boston University School of Medicine (MED) and a physician nutrition specialist at Boston Medical Center, and Elizabeth Henry, who will graduate from BU’s School of Public Health in September 2015, have received the People’s Health Medal from the Social Republic of Vietnam’s Ministry of Health for their work on behalf of the Abbott Fund Institute of Nutrition Science (AFINS).

Lenders and Henry were recognized for advancing hospital nutrition in Vietnam using a three-pronged approach based on education, clinical service, and research. The commemorative medal is the highest honor awarded to nationals and foreigners who make a major contribution to health care in Vietnam.

Beginning in 2010, Lenders and Henry led AFINS, a unique effort that brings together Vietnamese and US nutrition and global health experts from hospitals, academia, government, and foundations.

The program is a partnership between MED, Bach Mai Hospital (BMH), Hanoi Medical University (HMU), and the National Institute of Nutrition (NIN) in Vietnam and the Abbott Fund to address hospital malnutrition and strengthen hospital nutrition knowledge, attitudes, and practices.

These collaborative efforts would not have been possible without the vision and investment from the Abbott Fund, the foundation of the global health care company Abbott, which awarded more than $4.4 million to implement this multifaceted project, oversee nutrition medicine fellowships for Vietnamese health professionals, and provide mentoring.

Additional alliances were formed with experts in dietetics, pharmacy, nutrition medicine, education, and global health from BU’s Sargent College of Health & Rehabilitation Sciences, Emory University, the University of Texas, and Boston Children’s Hospital in the United States and with Children’s Hospital 1 in Ho Chi Minh City in Vietnam.

The AFINS experts provided technical support for the development of nutrition and dietetics degrees at HMU with more than 30 nurse-nutritionist and 50 bachelors in nutrition and dietetics graduates, six research projects with the NIN tracking hospital nutrition, and the training of more than 2,000 Vietnamese health care professionals to improve capacity in nutrition departments. Additionally, AFINS partners found that hospitalized patients surveyed in 2013 at BMH were 29 percent less likely to be malnourished compared to those surveyed in 2010.

“It is a tremendous honor to receive the People’s Health Medal from Vietnam’s Ministry of Health,” says Henry, also a former instructor in the MED family medicine department. “The advances AFINS has made to improve outcomes and educate medical professionals about the importance of nutrition will have a lasting impact on the health care system in Vietnam.”

Lenders accepted the People’s Health Medal on behalf of the AFINS partners on May 27, 2015, in Hanoi. She continues to lead the AFINS project in Vietnam with an extension grant from the Abbott Fund that builds on the initial approach but also focuses on pediatric nutrition training and research in the southern region of Vietnam and provides support for the development and implementation of standards and assessments of provincial hospitals nationwide.

“Higher education and more training are critical to enhance hospital nutrition in Vietnam,” says Lenders. “Moving forward, we hope to learn more about the impact of medical nutrition interventions involving a younger patient population in a variety of inpatient and outpatient settings for a sustainable future.”