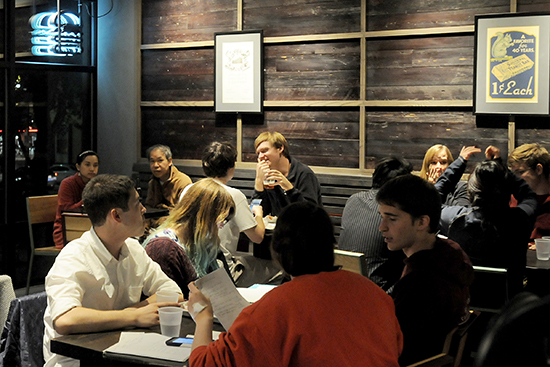 The upper level of Shake Shack fills up each Thursday for trivia night, so be sure to arrive early. Photos by Smaranda Tolosano (CAS’16)

Do you remember who guides Dante through hell in his epic poem The Divine Comedy? Or what color is midway between blue and green on the RGB color scale? If you know the answers to arcane questions like these, consider heading over to Harvard Square tonight for Shake Shack’s Quizzo trivia night, held each Thursday from 7 to 9 p.m.

Founded by noted restaurauter Danny Meyer in 2001 as a popular hot dog cart in Manhattan, Shake Shack today is a 37-restaurant US chain, with new Shacks set to open in Dallas and Los Angeles next year. Modeled on old-fashioned roadside burger stands, the chain has become popular for its all-natural Angus beef burgers, hot dogs, frozen custard, and shakes (beer and wine is also served).

We stopped by recently to nosh and to test our mettle by playing Quizzo, the trivia game said to have begun in Ireland. We managed to find a seat in the crowded upstairs loft in time to hear the rules of the game. The evening consists of five rounds (each with its own theme) and you can choose a round where you can double your points. Of course, laptops and cell phones are not allowed. The first place team wins a $40 Shake Shack gift card, second place a $20 gift card, and runners-up Shake Shack beer mugs and T-shirts.

We ordered before the game began: the SmokeShack ($6.69), a cheeseburger topped with applewood-smoked bacon, chopped cherry peppers, and the secret ShackSauce. The delightfully smoky burger packed a nice punch courtesy of the cherry peppers. We also tried the vegetarian ’Shroom Burger ($6.99), a fried portobello mushroom filled with melted muenster and cheddar cheese, topped with lettuce, tomato, and ShackSauce. Cheese exploded out of the crispy portobello at first bite, making for a delicious and gooey veggie burger. Good as they both were, given the price they could have been bigger.

We also tried the crinkle cut fries ($2.95), crispy on the outside and soft on the inside, and finished off with the Lobstah Shell Concrete ($4.50 single, $6.75 double), made with vanilla frozen custard, strawberry puree, ricotta cream, and lobster tail pastry from Boston’s North End. This was a disappointment—we couldn’t taste the ricotta cream and the pastry shell was stale.

We hoped for better luck as the trivia competition got under way. After getting 8 out of 10 questions right in the first general knowledge round, we were feeling pretty confident. We correctly answered questions about the cost of Netflix’s basic subscription plan and the name of native New Zealanders with ease. But the rounds got progressively harder, and by the end we were scrambling for even unlikely guesses. We had no idea what was the favorite movie of Mean Girls character Regina George. And during the music trivia round, we were stumped about the artist behind “Get Ready for This,” played constantly at sporting events and featured in several movies. Correct answer: the Eurodance group 2 Unlimited. Despite the challenges, the evening was a blast. Charismatic and entertaining lead host Consuela took on different voices and danced during the music round. The atmosphere was casual and the competition friendly.

When the scores were tallied at the contest’s end, we weren’t even in the top three, but it didn’t matter. We were already plotting a return visit.

Shake Shack is at 92 Winthrop St., Harvard Square, Cambridge; phone: 617-864-8161. Quizzo Trivia Night, free and open to the public, is every Thursday from 7 to 9 p.m in the upstairs loft. The restaurant accepts all major credit cards. Take an MBTA Red Line trolley outbound to Harvard Square. Teams should arrive 10 minutes early to ensure  seats.

This is part of a weekly series featuring Boston nightlife spots of interest to the BU community. If you have any suggestions for places we should feature, leave them in the Comment section below.

Kylie Obermeier can be reached at kylieo@bu.edu.