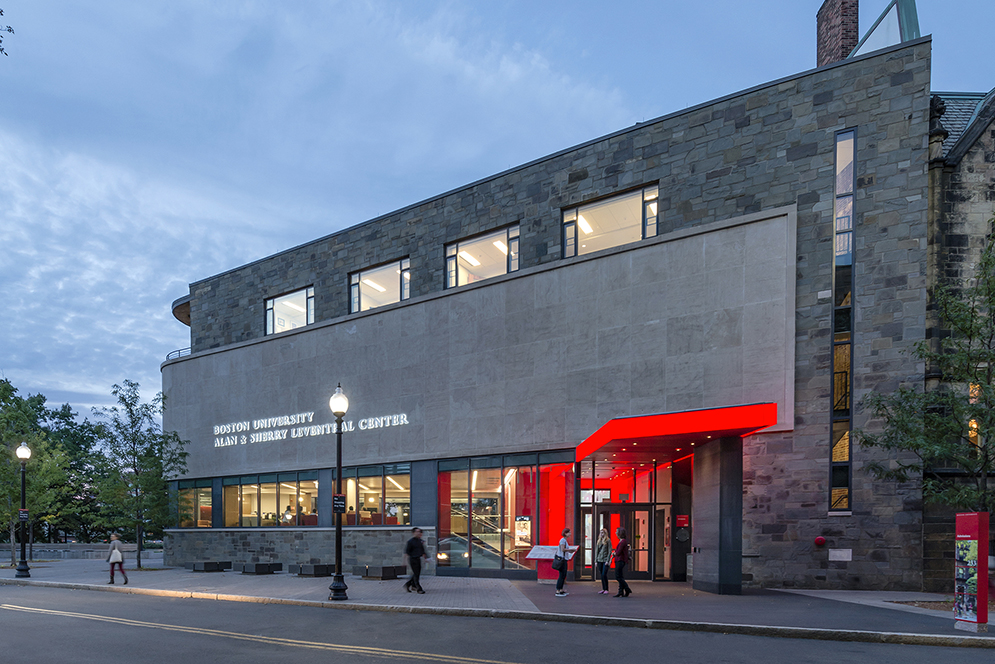 Transforming the building into an “exuberant, extroverted admissions reception center” started with a more welcoming entry and a canopy in bright BU red. Photos by Anton Grassl/Esto

The Leventhal Center will receive a 2015 Preservation Achievement Award from the Boston Preservation Alliance in a ceremony tonight at the Cutler Majestic Theatre. The honor recognizes outstanding achievement in historic preservation and compatible new construction.

“The fact that BU not only figured out a way to reuse this building, but to make it a new focal point on campus was something that was really of interest to us,” says Boston Preservation Alliance executive director Greg Galer.

The desire to create that focal point is the reason the design by Boston architectural firm Goody Clancy included a glass canopy in BU red above the main entrance, says Gary Nicksa, BU senior vice president for operations. “I used it during Move-in weekend,” he says. “Someone was looking for the admissions center. I pointed them to this street and said, ‘Look for the stone building with the red glass canopy above the main entrance.’ It gave it that signature element.”

In fall 2014, the center was named for BU trustee emeritus Alan Leventhal (Hon.’09), chair of the Board of Trustees from 2004 to 2008, and his wife, Sherry Leventhal, both longtime University benefactors.

“The center has completely revamped the visitor experience,” says Laurie Pohl, vice president for enrollment and student affairs. “It allows us to accommodate more people and give them a better experience.”

The original structure, the University’s Hillel House until 2005, when the new Florence and Chafetz Hillel House opened, was built in 1953 by the Boston architectural firm of Krokyn and Browne, which also designed the Circle Theatre in Cleveland Circle, the West Newton Cinema, and other public buildings. The building’s International Style features include a steamlined horizontal look that subtly references the speeding traffic on Storrow Drive, Galer says, as well as a curved prow. The renovation sends the message that mid-century modern buildings from the 1950s and ’60s are worthy of preservation. “BU has a big campus,” he says. “They could have made an awful lot of buildings their admissions center, and they chose this one.”

The architects say the makeover presented both structural and functional challenges because of the building’s triangular footprint, a tightly constricted site, and the requirements of a high-traffic admissions center with as many as 2,000 visitors a day at peak times in the spring and fall.

“The major accomplishment through the design process—how to get the building to transform into this exuberant, extroverted admissions reception center—started with the entrance,” says Goody Clancy project manager Todd Symonds, a firm associate principal. “It really let the building be more welcoming.” To accomplish that, the architects replaced a dark, recessed entrance with the more inviting grade-level entrance with the red glass canopy.

The distinctive BU red is used judiciously throughout, even in fabrics and upholstery. “It was really important for all of us how to have the building be branded as a Boston University building, but at the same time feel comfortable and welcoming,” says Symonds.

“What was unique was working with the admissions folks and trying to figure out what the choreography would be to bring in all these parents with their prospective students,” says project architect Arjun Mande, also a Goody Clancy associate principal. “They worked with us and with the building to see how it would work best. That process was really very interesting.”

The architects created a 150-seat auditorium in the building’s existing structure and added a mostly glass 2,500-square-foot addition on the north side that improves the flow of visitors and offers a striking view for people on Storrow Drive. The project also opened up the first floor, replacing narrow, slotlike windows on the Bay State Road side with strips of large glass panes.

By adding all that glass, “that outside-inside connection started to happen,” says Mande. “We started calling it ‘BU on Stage.’ When you’re sitting in the waiting room and looking outside, you have the river on one side, BU Beach on one side, and the campus on the third. I think that was like the key moment. Once you opened it up, it connected really well to the campus, and it all started to make sense.”

Pohl says the central location, the dedicated auditorium, and the technology in the new building allow for more sessions for prospective students and parents and make it possible to customize for specific purposes.

“Everyone who’s been in the building loves the space,” Pohl says. “It’s very welcoming, it’s bright. That whole back side, looking out over the river and the Esplanade, that’s part of our campus too, and we’ve made that visible to people for the first time.”

The previous student admissions reception center, which occupied the first two floors of a Bay State Road brownstone, had perhaps 4,000 square feet total, Nicksa notes, while the new one has more than 19,000 square feet.

Bay State Road was also realigned, moving traffic away from the building and eliminating a few parking spaces, which enabled the width of the sidewalk to be tripled and a pedestrian plaza to be created to the west of the building, with trees and benches.

The University and the architects also earned a gold Leadership in Energy & Environmental Design (LEED) certification, indicating a green, efficient building. They used techniques such as an innovative “variable refrigerant flow” system for much of the building, using small diameter pipes to move liquid for heating and cooling rather than large air ducts.

As part of the project, an elevator was installed in the building for the first time. The center shares a common wall with the Castle, the University landmark slated to become an alumni center. Eventually the two structures will be connected, and the newly installed elevator will serve both.

There is 1 comment on Leventhal Center Wins Boston Preservation Award