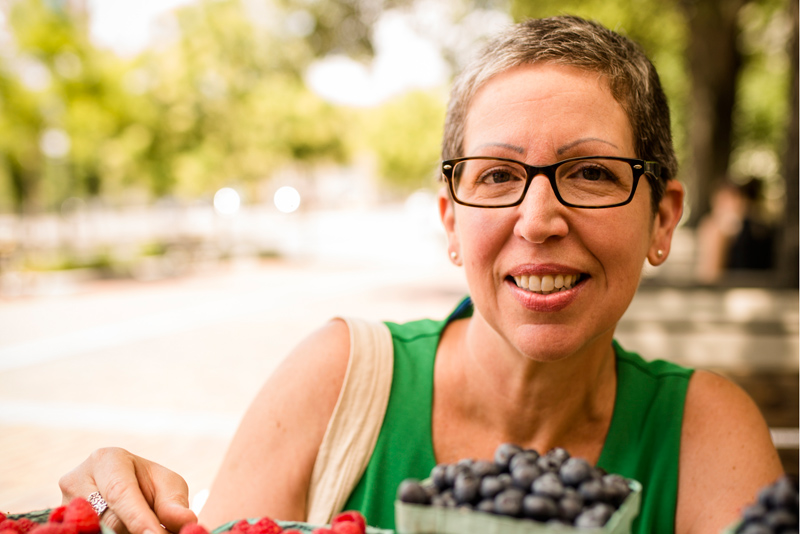 Michele DeBiasse, a Sargent clinical assistant professor of nutrition, works with women of low socioeconomic status (SES) and studies a practice called implementation intentions, in which an individual plans to perform a particular action at a specific time and place. Photo by Dan Aguirre

We all do it. We intend to ease up on the carbs or the junk food and eat more leafy greens. But somehow, between setting a goal and getting in gear, we slip up.

To help people make the leap between their intentions and adopting healthy habits—specifically, eating more fruits and vegetables—Michele DeBiasse is studying a practice called implementation intentions, in which an individual plans to perform a particular action at a specific time and place. Her research was partially funded with a five-year Centers for Disease Control and Prevention grant for the Partnership in Health & Housing (PHH), a collaboration among Boston Housing Authority (BHA), Boston Public Health Commission, the PHH Community Committee, and Boston University School of Public Health (SPH) that promotes the health of BHA residents.

DeBiasse, a BU College of Health & Rehabilitation Sciences: Sargent College clinical assistant professor of nutrition, is working with women of low socioeconomic status (SES) who face high hurdles in improving their diets. In a study she conducted with the assistance of SPH, DeBiasse found that mothers and daughters who live in public housing in greater Boston aren’t eating many fruits and vegetables, even though they know these foods are good for them. She believes one reason is economics. Showing people how to buy fruits and vegetables at lower costs—choosing canned or frozen foods, for example, and using government assistance coupons at farmers markets—can make a difference, says DeBiasse. But even addressing a host of barriers, including economics, won’t necessarily get someone to stick with a health plan.

DeBiasse invited some of the women living in public housing to join her intervention study, which she says is the first to test implementation intentions exclusively with women of low SES. In a phone conversation, she helped them create a plan to eat one additional daily serving of fruits or vegetables over the course of a month, which involved noting specific places and times when they could do so. She then asked them to write the plan in an “if-then” format, such as: “If it’s between 3 and 4 p.m., and I am on the living room couch watching TV while waiting to pick up my child from school, then I will eat half a grapefruit.” One month later, they completed a short survey through which DeBiasse could assess their progress.

There are two primary reasons this method should work. First, it means they’ve got a plan, which is more likely to help them reach a goal than a vague intention. DeBiasse says study participants told her, “Nobody’s ever asked me [about eating more fruits and vegetables] or actually planned with me how I was going to do it.” Second, a specific if-then plan helps make the behavior automatic. Take walking for exercise, says DeBiasse. When the opportunity arises, you debate, “Should I do this now or wait until after dinner? Where am I going to walk and for how long?”

“Having to think through all these questions makes it easier for you to just say, ‘Oh, forget it!’” says DeBiasse. But if you make a plan—“If I’m home from work by six o’clock, then I will go to the track”—you don’t have to make any decisions: you just do it. You can also make contingency plans to account for unexpected circumstances, such as, “If I have to work late, I will get up an hour early the next day to walk at the track instead.”

While DeBiasse needs to finish analyzing the data to see if the intervention shows promise, existing research indicates she’s on the right track: implementation intentions has been shown to significantly increase people’s success in reaching their goals. One frequently cited study in the British Journal of Health Psychology, for example, showed that 91 percent of participants who wrote a plan specifying when and where they would exercise followed through once or more a week, compared to just 38 percent of the control group.

If the intervention works, says DeBiasse, public health professionals nationwide would have a simple, low-cost tool to help individuals or groups of low SES to improve their overall health. And all of us might learn a thing or two about keeping our New Year’s resolutions.

Change of Plans: Why Do We Break Our Health Resolutions?

Change of Plans: Why Do We Break Our Health Resolutions?
0
share this