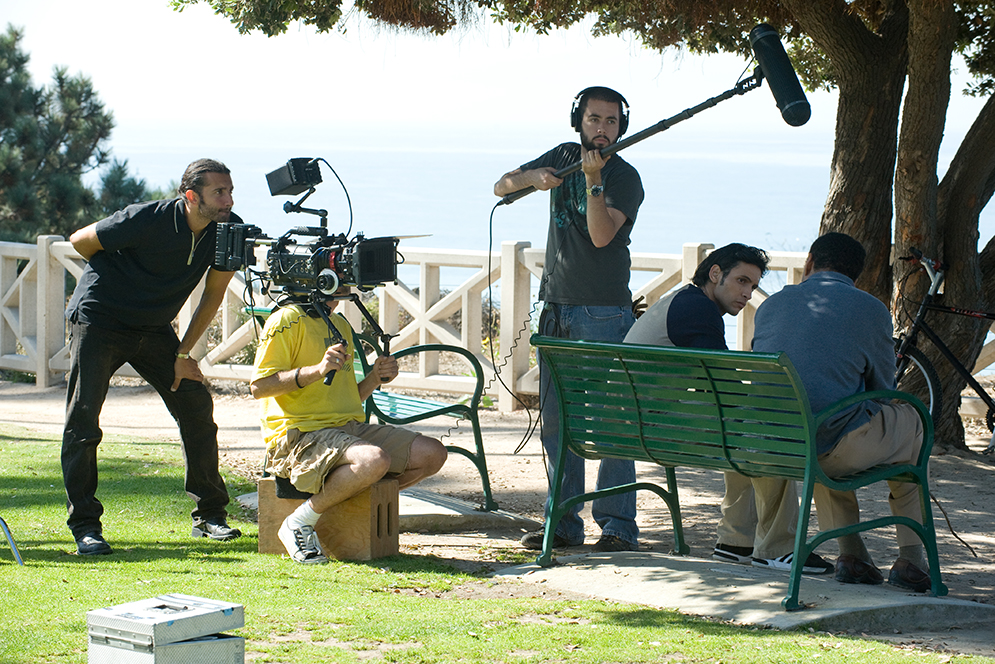 Giovanni Zelko (COM’96) (left) directing Ben Youcef (second from right) in a scene from The Algerian on location in Los Angeles. Photos by Orsoya Tucker

What if a terrorist sleeper agent started to fall in love with America?

That question drives The Algerian, the feature film debut of Giovanni Zelko (COM’96), which opens tomorrow in the Washington, D.C., area.

Ben Youcef (Munich) stars as Ali, a young Muslim man whose childhood tragedy has made him a fertile target for terrorist recruiters. But when he settles in L.A. to await orders, he finds friends, a lover, and even a spiritual mentor, a peaceful American imam played by Hollywood veteran Harry Lennix (Man of Steel, 24). While Ali doesn’t like America’s materialism or the way this country treats Muslims around the world, he begins to see beyond his terrorist programming and to doubt the violent plot he has committed himself to.

“As he gets closer to his own humanity, the more he can see the humanity of the people around him,” says Zelko, writer and director of The Algerian.

The filmmaker was in Manhattan when the 9/11 attacks claimed the lives of more than 2,700 people, and he says the film is a response to questions he began forming that day, among them, “How did it affect the way Muslims living in America are viewed by others, and how Muslims living here view Americans?”

Zelko, who works in Hollywood as a lighting and electrical technician, wrote the film script with Youcef, an actor he met at a gym in Venice, Calif. A native of Algeria and a Muslim, Youcef lived in Saudi Arabia and London before coming to the United States and becoming a citizen.

“Ben added a very sincere and real response to what it’s like to be a fish out of water, what it’s like being a Muslim immigrant in America, in a major city like Los Angeles, and trying to cope with that,” says Zelko, a first-generation American whose parents are Italian and Slovenian. “We injected those elements into the story of a political terrorist organization.”

There’s a parallel to their relationship in the film, when Ali meets a man working out at the beach. Their budding friendship unravels when the American turns out to be a Marine who is between tours of duty in Afghanistan.

“Ben and I are both fans of movies from the ’70s and ’80s, like Three Days of the Condor and Cloak and Dagger,” he says. “Political thrillers that have strong pacing, but are not big action movies. The audience is put in the thinking seat and taken on this journey, but you don’t really know where you are going.”

In addition to writing and directing, Zelko was the executive producer and the film’s editor—he even ran camera at some points during the shooting. He also plays one of the terrorists, a lot of hats to wear, even for an indie film.

“I think there’s an actor inside of all of us just screaming to get out,” he says. “The character I played was originally designed for someone else, but because of the shooting schedule, the role would span a minimum of a year and different locations, and the actor had to have different facial hair for each sequence. I wasn’t able to find someone to commit to that. So I restructured the character around what I can do as an actor.” And because he “didn’t want to look like a ridiculous megalomaniac with 20 credits on the movie,” his performance is not mentioned in the press materials. “I am in the end credits,” he says.

Shooting primarily on weekends in Algeria as well as New York, Las Vegas, and Los Angeles, The Algerian took six years to make. It began appearing on the festival circuit in mid-2014 and has received a number of awards, including best picture at the 2014 Downtown Film Festival in Los Angeles and the 2015 International Filmmaker Festival of World Cinema in London, where Youcef was named best actor. Zelko says that this weekend’s box office sales will determine where the film is shown next.

The response to the film has been polarized, he says, “with moderates on both sides who think it’s a good message,” while some say it’s too sympathetic to a terrorist and others wondering why he couldn’t make a movie about a Muslim who isn’t a terrorist.

Since graduating from the College of Communication, Zelko has worked in Hollywood on such movies as Wicked, Godzilla, and Charlie’s Angels, as well as episodes of television’s It’s Always Sunny in Philadelphia, Mad Men, and House. He recently finished working on the TNT series Murder in the First, produced by Steven Bochco.

Zelko says he’s always intended to make his own films. He met Lennix while they were working on the Fox series Dollhouse. At the time, he was planning to make the short film The Interview on the side, but as the day of the shoot approached, he discovered that his lead actor wasn’t available.

He approached Lennix: “I’m like, ‘Hey, Harry, I’m doing this thing out in the desert, would you be interested? It’s a one day shoot, an action thing.’” Lennix read the script and loved it, Zelko says. “He was super-busy but he spent a whole day out in the desert with us, and since then we’ve been working on a couple of things.” As well as acting in the film, Lennix is one of The Algerian’s producers.

“Film school is absolutely essential if you’re going to go the distance and write and direct and produce,” says Zelko, who majored in film and television at COM and minored in English. “The academic aspect of it has always helped me, because it gave me the structure to break components down into their individual parts.”

While The Algerian was shot and edited digitally, he says, editing actual film at BU was crucial: “When I moved on to edit films on the computer, like we do today, I already had a tactile resonance of what one cut really means, what each piece of film represents, how important or not important it is, in order to stitch together the scene.”