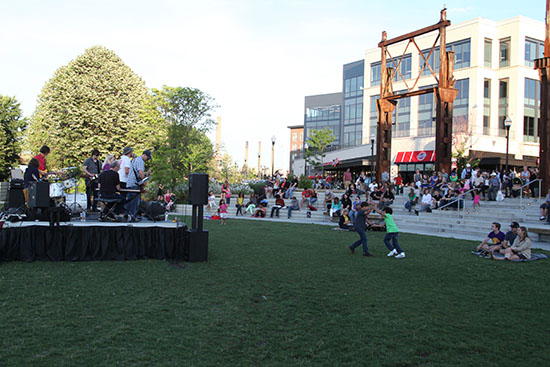 When Assembly Row opened last summer, the mixed use development created immediate buzz. Patrons were soon flocking to its 32 new outlet stores, Legoland Discovery Center, and Cineplex as well as the brand-new 6.1-acre Baxter Riverfront Park on the banks of the Mystic River. The park has an amphitheater, a playground, a bike path, and even a boardwalk that connects the complex to the nearby Ten Hills neighborhood.

Acoustic Monday performances are held in the park area behind Assembly Row’s River Bar restaurant. The setup allows restaurant patrons, parkgoers, and passersby alike to enjoy unplugged tunes while enjoying the riverfront views. The Thursday concerts are in the park’s amphitheater.

Assembly Row is hosting a number of other outdoor events at Baxter Park this summer, including a free movie series on Saturdays through August 29, beginning at dusk. Among upcoming films are Big Hero 6 (July 18), E.T. the Extra-Terrestrial (July 25), and The Wizard of Oz (August 8). Visitors can also take part in a free riverfront yoga class each Saturday through September at 9 a.m. The class is taught by instructors from Somerville’s some.yoga.studio (be sure to bring your own mat).