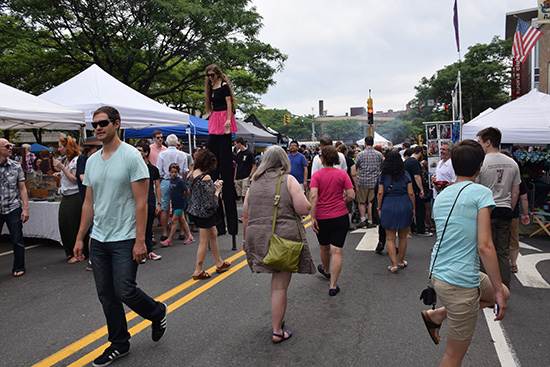 Somerville’s Davis Square will be transformed into one of the Boston area’s biggest summer arts festivals starting tonight with the return of ArtBeat, the free, two-day arts festival held every year during the third weekend in July.

Each year, the festival, sponsored by the Somerville Arts Council, is centered around a theme used as a kind of launching pad by participating artists. This year it’s “loops,” and the festival is celebrating “all things that loop, encircle, repeat, and play back in endless cycles” either through repeated riffs in songs, circular dance movements, a cylindrical piece of art, or repetition in a theatrical performance. In light of that, tonight the Boston Hoop Troop, the leader in Boston’s hoop scene, will be among those performing.

Tomorrow, July 18, the square shuts down completely to make room for dozens of craft vendors and two music stages. Among the performances: the fuzzed-out sound of Frollicking Lamb, Balkan music by Gogofski, and the versatile Dust Clouds of Mars, on the Elm St. stage, and on the Seven Hills stage, the locally based indie rock band Soft Pyramids and gospel duo Bullock Brothers.

The ArtBeat 2015: Loops begins tonight, Friday, July 17, at Seven Hills Park, 55 Davis Square, Somerville, from 6 to 10 p.m., and continues tomorrow, Saturday, July 18, from 11 a.m. to 6 p.m. throughout Davis Square. A full list of scheduled events is here. Admission to the festival is free, but a donation of $3 is suggested. Take an MBTA Red Line train to Davis Square.