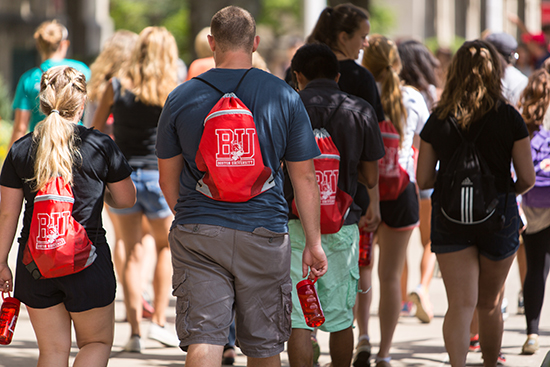 Among its accolades, BU was on the 2016 list of “high school counselors’ top college picks.” Photo by Michael D. Spencer

Boston University moved up one notch, from 42 to 41, in U.S. News & World Report’s annual rankings of the nation’s colleges and universities. In the just-released rankings, BU also was named to the lists of “high school counselors’ top college picks,” “foreign student factor,” and “best colleges for veterans.”

Jean Morrison, University provost, says she is delighted to see upward movement in the rankings. “At a time of unrelenting competitiveness, we are happy to see the hard work that our great faculty do in teaching and research and scholarship recognized,” she says. “News like this is always welcome, but it is also a reminder of how diligently we need to work in the years ahead to carry this progress forward.”

BU was awarded an overall score of 61 on a 100-point scale. The report lauded the University’s “highly ranked graduate schools,” including the School of Law, the Questrom School of Business, the College of Engineering, the School of Education, and the School of Medicine, which it cited for having the “nation’s first combined cancer research and teaching laboratory.”

There’s “little doubt” that high school counselors have “the experience and expertise needed to assess academic quality and give prospective students smart direction,” U.S. News writes in its list of 2016 “high school counselors’ top college picks.” The magazine asked 1,300 high school counselors nationwide to rank the quality of a school’s undergraduate academic programs from one to five. That number was then combined with three years of previous scores. BU shared 38th position with 7 other schools; they all received scores of 4.2.

U.S. News went on to identify national universities with the largest proportions of international undergrads, because, as they put it, “in a global culture, befriending and learning to collaborate with students from other countries can be rewarding personally and professionally.” BU reports that 19 percent of its undergraduates (approximately 3,400 students) came from foreign countries during the 2014–2015 school year.

At BU, military veterans and active-duty service members can take advantage of both the GI Bill and the U.S. Department of Veterans Affairs’ Yellow Ribbon Program, which provides financial assistance to service members who have served at least 36 months since 9/11. Those factors, combined with BU’s high overall U.S. News ranking, put the school 33rd on the list of best national universities for veterans.