In 1993, the Reverend Billy Graham asked an audience rhetorically, “Is AIDS a judgment of God?” He then answered his own question: “I could not say for sure, but I think so.”

Graham later apologized for suggesting that the Almighty had unleashed the epidemic to punish homosexuals. Yet the fact that an influential and popular pastor echoed views, however hesitantly, of harder-line clerics reflected the perception of many Christians, Anthony Petro writes at the outset of his new book, After the Wrath of God: AIDS, Sexuality, and American Religion (Oxford University Press, 2015). The book revisits the history of the disease in the United States and religious reactions to it.

Petro, a College of Arts & Sciences assistant professor of religion, says After the Wrath goes beyond most such accounts, which focus on the religious right’s reaction, to include mainstream and progressive denominations’ handling of the crisis. What began as a public health issue, he writes, became a pan-denominational discussion of morality and sexuality. Condemnations of promiscuity, support for abstinence and monogamy, even discussion of gay marriage: all were directly or indirectly touched by the moral debates launched by AIDS, he argues.

Petro faults even gay writers and activists—such as Randy Shilts, who condemned the Reagan administration’s indifference to the epidemic in his 1987 best seller And the Band Played On—for fostering notions that promiscuity was to blame for the disease. “Shilts wrote for a broad audience, and in doing so, offered a gripping narrative,” he says, “one that featured a Canadian flight attendant as the infamous ‘patient zero,’ or antihero, of the account. Shilts characterizes the epidemiological spread of the epidemic as very much a moral failing on the part of this flight attendant, who stands in for what he saw as the problem of promiscuous gay men more generally.”

Actually, After the Wrath argues that it is the type rather than frequency of sexual encounter that puts people at risk. BU Today interviewed Petro about his book.

BU Today: What did you find new to say about this topic? 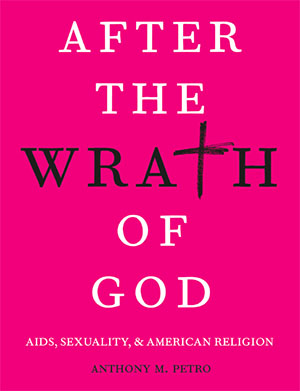 Petro: I suggest two main points about how leaders of the Christian right approached the AIDS crisis as God’s punishment for sexual immorality. First, this rhetoric wasn’t new. It comes out of much older theological and religious statements that connected sexual immorality to threats to a community or even a nation. In the medieval period, Christian writers reinterpreted biblical passages about the destruction of the city of Sodom as descriptions of sexual sin, namely, the sin of “sodomy” (which would become the sin of homosexual acts in the 20th century). Conservative Christians, in the decades preceding AIDS, worried about an epidemic of immorality tied to the sexual revolution of the 1960s.

The second point is that conservative rhetoric that characterized AIDS as God’s wrath was overrepresented in the media and in national consciousness. Most American Christians, even most evangelicals, downplayed or even rejected the idea that AIDS was God’s punishment. Or they layered this interpretation with calls for compassion.

What was the response of mainstream and liberal Christian churches and of non-Christian traditions to the epidemic?

Mainstream and liberal Christians were slow to confront the epidemic. It wasn’t until the mid-1980s that we saw mainstream Christian writers calling for attention to the crisis in national magazines like Christian Century and Christianity Today. By the end of the decade, though, a number of denominations had issued statements calling for care and compassion for people with HIV or AIDS, for governmental funding to fight the epidemic, and for an end to discrimination against people based on their HIV status and sexuality.

Some of the major non-Christian traditions, especially Judaism and Buddhism, had an easier time confronting the crisis and its connection to homosexuality. These traditions do not have the powerful readings of sodomy as sexual sin that have characterized Christian traditions for so many centuries. In fact, one of the very first public meetings to educate people about what at the time was called “gay cancer” was sponsored by a gay Jewish group in New York City in 1982.

What lessons should we draw going forward?

We should understand how arguments about public health are never just that. They are also arguments about human rights—about how we understand individual freedom versus community responsibility. Public health and politics can work together in productive ways, but such entanglements can also blind us to what can become moralistic arguments about who is or is not part of a valued community and about what kinds of risks we value and which we label not merely risks, but moral failings.

For instance, in the past few years, some dominant approaches to HIV prevention have focused on gay marriage as the antidote to promiscuity, and by extension, to increased rates of infection. In other words, in the fight for gay marriage equality, and even now that same-sex marriage is legal, some public health leaders and AIDS workers have championed gay marriage as a tool to fight HIV. I’m less interested in whether this logic is epidemiologically valid or not than I am in how it brings together a public health argument with a moral argument for marriage (and by extension, monogamy, which it often equates with marriage).

The history of the AIDS crisis and religion teaches us to look at such moments more critically, to pause and ask why it is that this particular reasoning appears more reasonable than emphasizing a variety of other tactics for fighting HIV.

How the AIDS Crisis Became a Moral Debate

How the AIDS Crisis Became a Moral Debate
1
share this