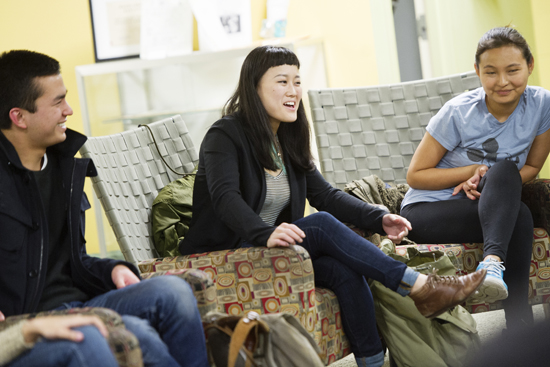 Laura Cha has heard the comment for much of her life, sometimes from BU students and professors: “‘You’re one of the more outspoken Asian women I’ve encountered.’” True, Cha (CAS’15, CFA’15) is president of the BU Women of Color Coalition, and “there are not a lot of Asian women who are involved with the things I’m involved with on campus.” The impression that she marches to her own tune, she adds, may have been underscored by her nose ring or the partially shaven haircut she once sported.

But even though she knows the comment is meant as a compliment, it rankles, she says, by trucking in the stereotype “that Asian women are very submissive, very quiet, don’t speak up for themselves.”

Such unintended offenses—based on race, gender, sexual orientation, or other factors—were dubbed “microaggressions” by an academic in the 1970s. Now the word is seeping into the vernacular courtesy of media stories. But the concept is familiar, perhaps most famously in  Joe Biden’s comment in 2007 about Barack Obama, then his rival for the Democratic presidential nomination, as “the first mainstream African-American who is articulate and bright and clean and a nice-looking guy.”

Biden later said that he regretted any offense, but that type of blunder lives on. A Facebook page, BU Micro/Aggressions, debuted in late March as “a place for marginalized BU students to voice their experiences.” Among the posts:

The Facebook page illustrates that some people don’t understand the true meaning of microaggression. Some posts report blatant and probably deliberate slurs, rather than unintended stumbles. At the other extreme, one post referred to a class discussion about abortion in which a male student opposed the procedure even in cases of rape. “I still feel sick from hearing that,” the person posting wrote. Maybe, but “someone disagreeing with you or flat-out telling you something is not a microaggression,” says Christian Cho, assistant director of the Howard Thurman Center for Common Ground.

Cho speaks with some authority. He often gets the question, “Where are you from?” When he answers, New York, sometimes “people will respond, ‘No, no, that’s not where you’re from; where are you really from?’ That’s definitely a microaggression,” he says, “because what that’s implying is I couldn’t possibly be from New York.” Cho led a discussion on microaggression at the Thurman Center last year that drew eight students, mostly African Americans. One attendee, Rebecca Demmellash (CGS’14), says she has had some people at BU tell her, “‘Wow, you’re so articulate.…You’re very poised.’ These are comments that I’m sure a lot of my white counterparts probably wouldn’t get, because it’s just more expected” of them.

Cha’s Women of Color Coalition also discussed microaggressions earlier this month. Students of color, gay students, and women frequently talk about the topic among themselves, she says, “because we all are experiencing them.”

There are skeptics. One, writing in The Atlantic, cited research indicating that distaste for other people exists even within racial and ethnic groups, not just between them, and suggested people reserve their umbrage for blatant, intentional slurs. Demmellash demurs, arguing that stereotyping others springs “from a subconscious place of seeing things in a racist way,” inculcated by a person’s society and upbringing. She and Cha also agree with Cho, who argues that in microaggression, we’ve reaped the results of political correctness: in a country whose history makes it hyperalert to racism, strenuous efforts to avoid racism can lead to a race-tinged insult, like Biden’s comment about Obama.

“I think microaggressions are a direct result of being too PC,” Cho says. And by and large, such unintended insults, students tell him, come “in the classroom from professors.” A commonly heard story in his discussion group involved professors specifically seeking minority students’ opinions, or glancing frequently at them, in conversations about racial matters, such as rap music’s use of racist slurs. Cho says students perceive such singling out as tokenism.

Given that black people historically have been denigrated by the n-word, isn’t a professor merely pursuing an obvious inquiry and perhaps trying to ensure that her class is not uncomfortable for black students when she asks an African American his view of music claiming license to use that slur? “That would be great if there were more African American students,” says Cho. “But to have one black student speak about their own experience, the effect is that that person then becomes a spokesperson for the whole race.” He advises professors to make clear that they’re asking for a student’s personal opinion, not for a statement reflecting what all black people think.

Kathe Darr, chair of the Faculty Assembly/Faculty Council, is familiar with the issue at BU; she says faculty at the School of Theology, where she is a professor, have dealt with it by both self-reflection and conversations with different racial groups, the only ways she thinks the problem can be tackled.

“Probably all of us, from time to time, use language in ways that are familiar to us, that we’ve been hearing since were small children, that emerge from presuppositions and biases that we may not have examined,” Darr says. “The task is upon all of us to engage in the kind of critical self-reflection and…conversations with others who can help us understand why the words we use can be hurtful or harmful in ways we don’t understand. Are faculty guilty of this? Well, I suppose, being human beings, faculty might be as vulnerable to this type of thing as any other part of the population.”

If the foregoing discussion makes microaggression sound like sin, something fallible humans will inevitably commit, Cho agrees. “That’s the insidiousness of microaggression,” he says. “You don’t know you’re committing one. That’s why we have to have these conversations. We can’t stop talking about it because of fear that it’s never going to end.”

But even if these offensive stumbles are inevitable, says Darr, “that’s not an excuse for continuing to use language in unreflective ways.”

Cha offers a simple rule of thumb: “Don’t tell anyone what she is actually like.”

When Words Are Unwittingly Racist or Sexist

When Words Are Unwittingly Racist or Sexist
94
share this