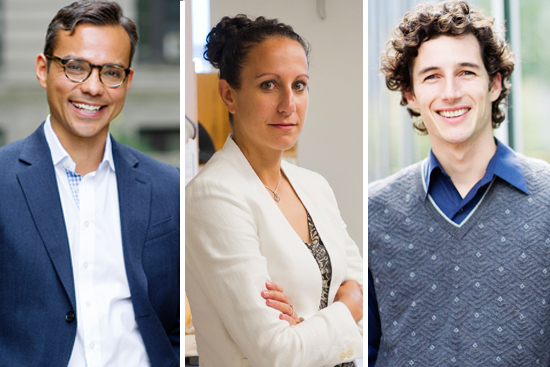 Junior faculty arrive at Boston University full of ambition and with a head full of ideas, but they often have relatively little money for research. So being awarded a Peter Paul Career Development Professorship can feel like winning the lottery; winners receive an annual stipend of $40,000 for three years to pursue their research interests.

For some, it can even seem too good to be true.

“Once I received the email, I asked if they had the right Professor Gonzales,” says Ernest Gonzales, a School of Social Work assistant professor of human behavior. Gonzales, who had no idea that he had been nominated for the award, says the reply from the provost’s office was immediate: “Yes, Ernest, it’s you!”

Peter Paul Professorships were also awarded to Rachel Flynn, a School of Medicine assistant professor of pharmacology and experimental therapeutics, and to Jacob Bor, a School of Public Health assistant professor of global health at the Center for Global Health & Development. University trustee Peter Paul (GSM’71) created the professorships named for him in 2006 with a $1.5 million gift, later increased to $2.5 million. Jean Morrison, BU provost, and President Robert A. Brown select recipients from faculty who are holding their first professorship, have arrived within the last two years, and have been recommended by deans and department chairs.

“It is a privilege to witness the development of talented young scholars into outstanding teachers and researchers,” says Morrison. “From the discovery of novel new cancer treatments and effective approaches to the HIV epidemic to improving conditions for an aging workforce, Professors Bor, Flynn, and Gonzales are fulfilling—and in many ways exceeding—the promise we saw in them when they joined the BU community. We are enormously proud of the important work they’re performing and excited to help advance their research careers.”

Gonzales, who earned a doctorate from Washington University in St. Louis, arrived at the University in July 2013. He is still thinking about how to use the award. He currently juggles several interdisciplinary research projects that focus on productive aging, structural discrimination in and outside of the workforce, and “unretirement”—the practice of retirees returning to work.

His initial findings suggest that the groups most vulnerable to ageism are workers under 30 and those 55 and older. Employees who fall within these ranges face social exclusion and questions about their professionalism or competence. Gonzales is also examining how early life experiences can predict difficult work trajectories later in life. Someone who enters the workforce at 17 with a high school diploma will likely work more physically demanding jobs—such as construction and manufacturing—that wear on their bodies and make it difficult to remain in the workforce long-term.

Gonzales also compares US practices to those in European countries, like Germany, where Chancellor Angela Merkel’s government recently enacted a policy that allows people who have worked 45 years to retire with full benefits. He believes these individuals will relax, recuperate, and eventually return to the workforce—a theory he’s calling “Triple R.”

“I think we have a lot to learn from other nations,” says Gonzales, who would like to conduct cross-national research to see how this and other productive aging policies affect workers’ health and economic standing, with the eventual goal of proposing policy and legislation in the United States.

Flynn, who earned a doctoral degree in cancer biology from the University of Massachusetts Medical School, has been at BU since June 2013. She studies the role telomeres, repetitive DNA sequences that cap the ends of chromosomes, play in cancer development. Each time a cell divides, Flynn says, it loses a chunk of telomere instead of more essential genes further upstream. When telomeres get too short, cells either stop growing or die.

“That is the aging process,” she says. But cancer cells have a way to “highjack this mechanism. When a telomere starts to get shorter, cancer outsmarts it” by reactivating the mechanism that keeps it growing forever.

Telomeres maintain their length using two pathways. Flynn’s lab studies the pathway used by osteosarcoma and glioblastoma—rare and lethal cancers of the bone and brain—and hopes to identify novel treatments that would target this highjacked pathway to better manage the cancers.

So far, Flynn has seen promising results. One compound she’s testing in vitro doesn’t just stop cancer cells from growing, but completely obliterates them—and with minimal effects to surrounding healthy cells. The next step is to test the compound in mouse models.

“If it works as well as it does in a dish, it’ll be amazing,” she says.

Flynn will use the award to hire lab personnel and to buy reagents. “It’s a tremendous opportunity to represent Peter Paul and have money to build my lab,” she says, “but the real goal is to raise the bar, to elevate cancer research at BU.”

Bor, who earned a doctorate at the Harvard University School of Public Health, came to BU in September 2013. He applies the tools of microeconomic models and natural experiments to the field of public health.

“Economics puts an emphasis on the individual; each person is making the best decision for themselves,” Bor says. “At least, that’s the theory.” He looks at decision-making and behavior in a larger economic context to determine what effects they have on health.

Across southern Africa, there’s an elevated HIV infection rate for young women. There are also “high levels of transactional sex,” Bor says. “Maybe if we can expand the choice set of young women so that they can make the best decisions for themselves, we can give them economic opportunities to avoid these relationships.”

In Botswana, he says, the government changed the structure of secondary school so that young women were encouraged to attend. The move resulted in a decrease in HIV infections within that population, he says.

With the award, Bor plans to recruit more doctoral students and research assistants to tackle the papers he’s been dreaming of writing, especially on questions related to South Africa’s HIV treatment program.

“The goal is to rigorously turn these out,” Bor says, “and the faster we do so, the better monies are allocated and the more lives can be saved.”