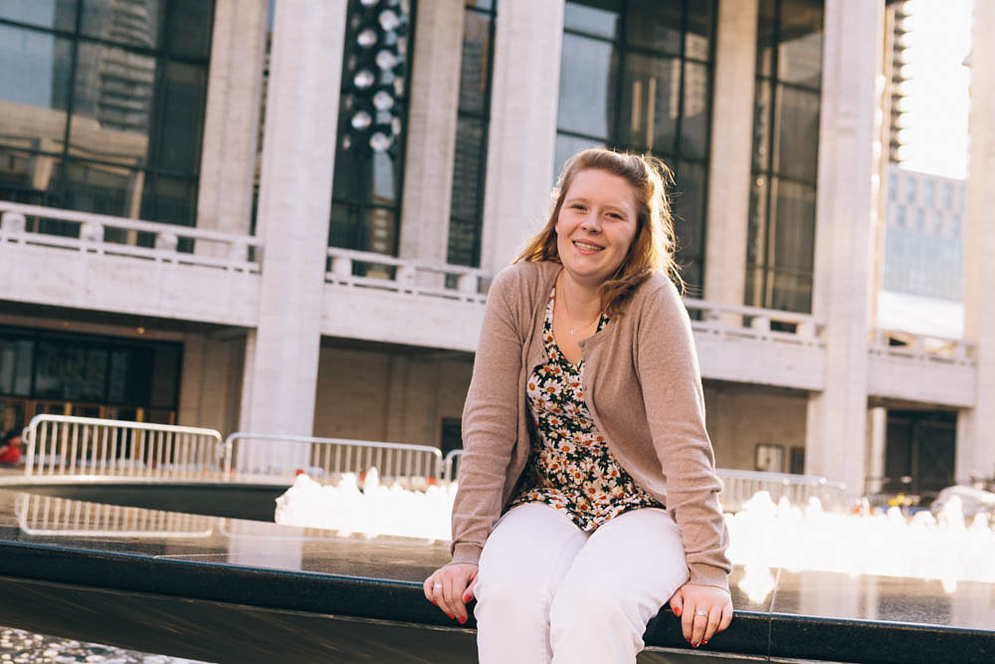 Internships often play a critical role in job hunting as employers increasingly seek graduates with some real-world experience. A 2012 Marketplace and Chronicle of Higher Education survey found that employers place more weight on experience, particularly internships and employment during school, rather than academic credentials, when evaluating a recent graduate for employment.

With that in mind, BU Today reached out to five undergrads who interned this summer, asking them about their experience. We are featuring a different story each day this week.

I spent this summer facilitating all technical aspects of the Lincoln Center Festival. My title was production management intern, and the position was paid. The festival is one of Lincoln Center’s most prestigious summer programs. I really did not know what to expect. I was very excited to be working with such world-renowned artists as members of the Bolshoi Ballet of Russia and Cate Blanchett.

How I landed the internship:

I found the internship through a School of Theatre alum who currently works for a different department of Lincoln Center for the Performing Arts. I met the alum through a BU Design and Production showcase in New York City during our 2014 spring break. Prior to that meeting, I knew nothing about the Lincoln Center Festival or its internship programs. During my interview, I was asked lots of questions about previous jobs I’d held with similar duties, such as working for the Williamstown Theatre Festival in the technical direction office. I was offered the Lincoln Center job within a few days of interviewing. I accepted because I knew it would be a good networking experience I would appreciate later in life.

A typical day on the job:

I became more confident in asking for what I want, when I want it. There were often screwups in deliveries or trucking, and I learned to be forceful but polite to achieve the outcome I wanted.

For example, the festival deals with a very frustrating water delivery company every summer. They often delivered the wrong things on the wrong days or tried to pick up water coolers in the middle of rehearsals while they were still being used. There were many times when the sales associate would try to blame me and my coworkers for the screwups, and I would often have to convince them it was not our fault.

What it taught me about the real world:

Sadly, no one really cares if you can solve problems.

Biggest mistake I made:

I did not rent a forklift that was the correct length one day, so we had to have a rush delivery of extensions, which slightly delayed the workday.

Most frustrating thing about the internship:

It was a desk job, and I do not particularly like to sit still. Running errands definitely helped break up the hours of sitting. I would often go to hardware stores to pick up emergency supplies or to convenience stores to buy water for crew members. I definitely got to know the city of New York very well.

I was the first intern for whom the director of production ever offered to be a reference.

Most important lesson I learned:

Your boss is always right. Once, my boss told me that I was referring to a particular building material incorrectly. I insisted I wasn’t wrong, and I actually wasn’t, but eventually, it wasn’t worth the argument.

What I learned about the real world that inspired or frustrated me:

Everyone wants a yes-man.

Overall grade and whether the internship lived up to my expectations:

It was certainly a good learning experience. But I would not recommend this internship to a fellow BU design and production student. While it was a great experience and I especially benefited from it, our particular education program is not structured in such a way to cultivate students that would appreciate the duties that come with this position.

My advice for others seeking an internship:

In the arts, it’s all about making connections and who you know.

Tomorrow, the final installment of our summer internship series: Designing for Southwest Airlines.