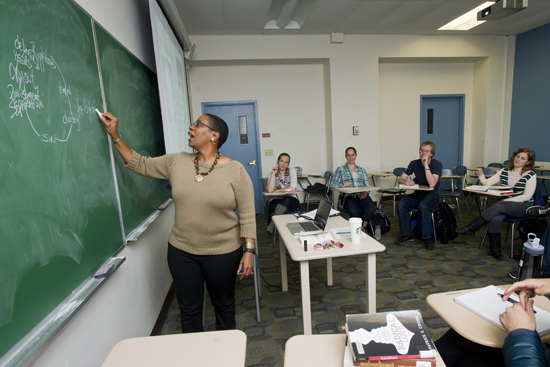 Are stereotypes about gays—for example, that gay men talk, dress, or gesture differently than straight guys—bigoted blather? Or is there such a thing as reliable gaydar that helps people, including gays, to perceive others’ sexual orientation?

You might not expect openmindedness about stereotyping to come up in a seminar called Queer Theology, which studies questions about God and religion posed by gay, transgender, bisexual, and gender-questioning people, many of whom, according to teacher Pamela Lightsey, ask, “Does God hate me?” because of widespread prejudice.

Lightsey herself, she says, is the only openly lesbian African American cleric in the United Methodist Church, and a fervent critic of stereotyping. But the School of Theology associate dean and clinical assistant professor of contextual theology is devoted to coming at an issue from all sides. Recently, her seven graduate students in the seminar wrestled with stereotyping as Lightsey posed the discussion topic, “What value have queer bodies within the church and society?”

The class conversation generally frowned on assumptions based on sexual orientation, until Thomas Gray (STH’16) put in a qualified good word for it.

“As a gay man who does not live in a world of all gay men,” distinguishing between straight and gay men is a safety matter, he said. At a party, he must rely on gaydar if he wants to approach a gay man. Were he to misjudge and approach a heterosexual, “I’m going to get my ass kicked.”

“Have you ever hit on a man you thought was gay” but wasn’t? Lightsey parried.

“I was so disappointed,” Gray answered, getting laughs. Lightsey gently pressed her point: “By your own admission, normativity has its limits.”

This discussion honed the class’ key lesson. “I want them to be able to articulate theologically what impact queers of faith may have upon the church and society,” Lightsey said in an interview. That means students must examine their own assumptions, realizing that no one, regardless of race, gender, or sexual orientation, “gets away without being influenced by these societal constructions” of stereotypes. Assumptions based on gender and sexual orientation, and the prejudice that flows from them, aren’t the only game she’s after; she devotes one class session to racism within the LGBTQ community.

Lightsey is not overly concerned with whether students agree with her. “I hope they are really affirming the queer community when they leave, but largely, I want them to have a response that’s theologically sound,” she said. For those who share her view that the church should affirm LGBTQ people, “I don’t want them to go about in their affirmation sounding like idiots.”

And those siding with condemnation of homosexuality? “IF—that’s a large capital I, large capital F—if a student can leave my class with a theological perspective that is anti the LGBTQ community, they’ve got to do some really solid work in the class to stand on that.” But she says she’s open to the possibility: “There are many classes at Boston University where students walk away with a different take on the subject matter than the professor. It’s called education.”

After class, Gray said that while sexual orientation wouldn’t be an issue in an ideal world, the one we actually live in is such that “assumptions of who is gay by means of appearance is judging with whom you can be safe.” The real problem, he said, comes with prejudice based on those assumptions—“judging someone as different than you and then treating them as ‘other.’”

The class, he said, has taught him that “we all have privilege, and we all have oppression. As an upper-middle-class white man who is gay, I cannot afford to believe that my sexual orientation is better or worse than someone else’s race or gender.”

Having disputed with her conservative sister about scriptural support for both condemning and embracing nonheterosexuals, Lightsey prefers not to play dueling biblical quotes, which she calls “cherry-picking.” Rather, she wants queer theology to rest on REST (her acronym for Reason, Experience, Scripture, Tradition). A multitextured approach is necessary not only because conservative churches flat-out condemn homosexuality, but also, Lightsey believes, because mainline churches, including Roman Catholicism and Methodism, preach a confusing message, damning homosexual acts as sin while exhorting members to love the sinner.

By being out about her own sexual orientation, and as a social justice activist, she hopes to be a role model for LGBTQ people. “When they look at my life and the work that I do, I hope that it gives them courage to be their most authentic selves—out,” she said in the interview.

Yet in a country whose courts and legislatures (and occasionally, voters) have given the green light to same-sex unions in state after state, Lightsey sees the unsettling (for believers) prospect that the Christian church—long a force for moral causes, such as abolition and economic justice—may have to play catch-up to secular society on this one.

“On a given day, sex is a small part of anybody’s life—really!—whether you be heterosexual or whether you be lesbian, gay, bisexual, transgender,” she said. “But the church treats it as a large part of our life—too large, such that the church, as it relates to this issue, is really oppressive.…I actually hope that the church will be prophetic on this, that it will be, as Martin Luther King said, the headlight, not the taillight. But right now, unfortunately, the church is lagging behind public policy.”

Queer Theology will be offered again during the 2015 Summer I session.

There are 17 comments on Queer Theology: Does God Hate Gay People?