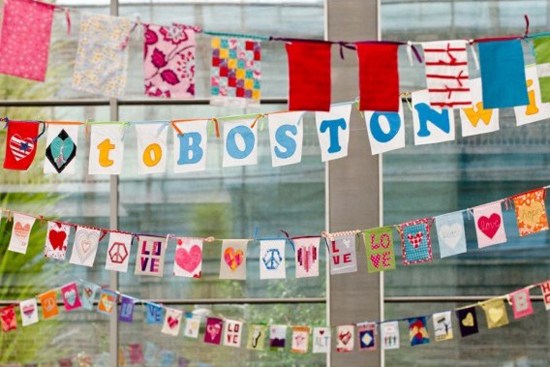 The MFA’s To Boston with Love exhibiton features hand-sewn flags with messages of inspiration and hope from quilters around the globe. Photo courtesy of the Museum of Fine Arts

Over the next several days, the city of Boston will come together to mark the one-year anniversary of the Boston Marathon bombings on April 15, 2013. The explosions injured approximately 260 people and claimed 3 lives, one of them BU graduate student Lu Lingzi (GRS’13). Museum exhibitions, concerts, charity events, and memorial services will honor both victims and survivors of the tragedy. We’ve put together a list of commemorative events being held on and off campus over the coming days.

The Boston Strong Virtual Charity by Fit4Charity is hoping to bring together individuals and groups of people to run in honor of the bombing victims. Participants can choose to run a 5K, 10K, or half or full marathon anytime between now and April 21, and can pick a day and time that works for them. The distance can be run on trails, roads, a track, even a treadmill. The registration fee is $35 and all proceeds go to support the One Fund Boston, which has already raised approximately $75 million for those most affected by the bombings. Organizers hope to raise $10,000 for the fund.

Following last year’s Marathon, a makeshift memorial quickly arose in front of Trinity Church in Copley Square. Visitors from around the world left handwritten notes, flowers, hats, T-shirts, and running shoes, each a symbol of love and support for grieving families and the city of Boston. In June 2013, when the memorial was dismantled, thousands of objects were transferred to the Boston City Archives for preservation. A selection of these items is now on display in the monthlong exhibition Dear Boston: Messages from the Marathon Memorial at the Boston Public Library in Copley Square.

The Boston Public Library, 700 Boylston St., Copley Square, Boston, is open Monday through Thursday, 9 a.m. to 9 p.m., Friday and Saturday, 9 a.m. to 5 p.m., and Sunday, 1 to 5 p.m. The exhibition is free and open to the public through May 11. By public transportation, take an MBTA Green Line trolley to Copley Square.

To Boston with Love, Museum of Fine Arts

In the aftermath of the bombings, quilters from every state and all corners of the globe created hand-sewn flags with messages of inspiration and hope. To Boston with Love was a grass-roots effort by Vancouver, Canada, resident Berene Campbell. Now, 1,700 of those flags are on display in the Museum of Fine Arts Shapiro Courtyard through April 30. It coincides with the MFA’s latest exhibition, Quilts and Color: The Pilgrim/Roy Collection.

To Boston with Love is on display at the Museum of Fine Arts, 465 Huntington Ave., Boston, through April 30; hours are Monday, Tuesday, Saturday, and Sunday from 10 a.m. to 4:45 p.m., and Wednesday through Friday from 10 a.m. to 9:45 p.m. Admission is free for students with a valid BU ID, $23 without student ID, $25 for adults, $23 for seniors 65+, children under 18 free. The museum is free to the public on Wednesday evenings and on Saturday, April 19, which has been declared To Boston with Love Community Day. By public transportation, take a Green Line E trolley or 39 bus to the Museum of Fine Arts stop or an Orange Line train or bus routes 8, 47, or C2 to the Ruggles stop.

In the weeks after the bombings, Good Mojo Tattoos in Beverly, Mass., donated proceeds from Boston-themed tattoos to One Fund Boston, and other tattoo stores followed suit. As a way of honoring first responders and victims of the tragedy, Boston Center for Adult Education instructor Chris Padgett photographed the many people who got Boston-themed tattoos. His yearlong project, Bled for Boston, is on display at the BCAE through April. Proceeds from Padgett’s book of the photos, Bled for Boston, will benefit Spaulding Rehabilitation Hospital.

Bled for Boston is on display at the Boston Center for Adult Education, 122 Arlington St., Boston, through April 30. The BCAE is open Monday through Friday, 9 a.m. to 5 p.m., and the exhibition is free and open to the public. By public transportation, take a Green Line trolley to Arlington Street or an Orange Line train to Back Bay.

Blessing of the Runners at Marsh Chapel

During Marsh Chapel’s Palm Sunday University Interdenominational Protestant Worship Service, the seven runners from the BU community selected to run in honor of Lu Lingzi (GRS’13) will receive a special blessing from the congregation at the beginning of the service. All are welcome.

Tibetan prayer flags are known throughout the world as symbols of blessing. To commemorate the anniversary of the 2013 Boston Marathon, the Isabella Stewart Gardner Museum’s Education Studio is holding a workshop, where visitors can create Tibetan-inspired prayer flags. The monthlong collaborative project concludes today and the finished prayer flags will be hung throughout the city.

Admission to the Isabella Stewart Gardner Museum, 280 The Fenway, Boston, is free for BU students with a valid ID, museum members, members of the US military and their families, and anyone named Isabella. General admission is $15, $12 for seniors 65 plus, and $5 for students from colleges not participating in the University Membership Program. Visitors are welcome April 13 between 11 a.m. and 2 p.m. to participate in the Prayer Flags Project. By public transportation, take an MBTA Green Line E trolley or a #39 bus from Copley Square to the Museum of Fine Arts stop.

A Concert of Hope and Peace

The Hawthorne String Quartet, comprising members of the Boston Symphony Orchestra, will perform a concert at the John F. Kennedy Presidential Library and Museum to commemorate the first anniversary of the bombings. WBZ-TV anchor Lisa Hughes will introduce the quartet, which will perform a concert of music by Mozart and André Previn, among others. There will also be a reading of selected poems by author Richard Hoffman.

A Concert of Hope and Peace is Sunday, April 13, at the John F. Kennedy Presidential Library, Columbia Point, Boston, from 3 to 4 p.m. You must register in advance here to attend. The event is free and open to the public. By public transportation, take an MBTA Green Line trolley to Park Street, transfer to a Red Line train toward Ashmont, and get off at JFK/UMass.

Marsh Chapel will host a memorial service for Lu Lingzi (GRS’13), one of three people killed in the Marathon bombings. Organized by the Chinese Students and Scholars Association (CSSA) under the guidance of Brittany Longsdorf, University chaplain for international students, and CSSA president Haisu Yuan (CAS’14, COM’14), the one-hour interdenominational service will include remembrances from friends. The service is open to the public, but closed to media.

The Memorial Service for Lu Lingzi is at 7 p.m. at Marsh Chapel, 735 Commonwealth Ave., Boston.

In memory of all victims of violence, Boston Medical Center will host a special Flag Raising Ceremony at BMC’s Moakley Green. Speakers will include Kate Walsh, BMC president and CEO, Peter Burke, chief of trauma services, and Boston Marathon survivor John Odom. Irish tenor Ronan Tynan will perform. During the half-hour ceremony, portions of the America 4 Boston Prayer Canvas—a traveling message of hope signed by more than 50,000 people from all 50 states and 30 nations—will be on display and available for BMC staff to add their own messages of love, hope, and remembrance.

The Flag Raising Ceremony is at 11 a.m. at Boston Medical Center’s Moakley Green, 830 Harrison Ave., Boston. It is free and open to the public.

In memory of the Marathon bombings, the BU Arts Outreach Program, the BU Arts Initiative, and the College of Fine Arts student-led Boston Accompanietta, along with members of the BU Symphonic Chorus and BMC musicians, are bringing a full orchestra to the Medical Campus for a flash mob. Everyone is invited to gather at noon at Talbot Green to perform the Secret Garden song “You Raise Me Up,” made popular by recording star Josh Groban.

Boston Globe staff writers Scott Helman and Jenna Russell, authors of the recently published Long Mile Home: Boston Under Attack, the City’s Courageous Recovery, and the Epic Hunt for Justice, will discuss their book chronicling the bombings and the aftermath, with its focus on seven individuals. The panel discussion is at the Boston Public Library, moderated by WBUR reporter and host Deborah Becker.

The Author Panel is at 6 p.m. at the Boston Public Library Rabb Lecture Hall, 700 Boylston St., Copley Square, Boston. The event is free and open to the public. By public transportation, take any Green Line trolley to Copley Square.

Marsh Chapel will host a special 30-minute interdenominational prayer service Marathon Monday in remembrance of those lost and injured in last year’s bombings. The service, with Rev. Robert Allan Hill, dean of Marsh Chapel, presiding, will include prayers, readings, meditation, and music. A complimentary buffet brunch follows on Marsh Plaza and the BU Beach, followed by a trip to Kenmore Square to watch the final mile of the race. (In the event of rain, the brunch will be held in the lower level of Marsh Chapel.)

The Marathon Monday Prayer Service and Brunch begins at 10 a.m. at Marsh Chapel, 735 Commonwealth Ave., Boston, and is free and open to the public.

Observing the Anniversary of the Boston Marathon Tragedy

Observing the Anniversary of the Boston Marathon Tragedy
2
share this