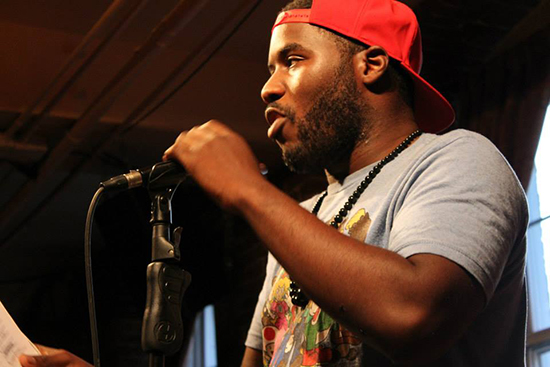 Each Wednesday, an eccentric group of people—all spoken word enthusiasts–gathers at the Cantab Lounge in Cambridge for one of the city’s best-kept secrets. The Boston Poetry Slam is devoted “to the craft, performance, and enjoyment of poetry,” according to its website.

For just $3, you can hear some of the area’s best poets, up-and-coming and established. The event commences at 8 p.m. with the popular open mic segment, which allows anyone to present his or her work. No prior experience is necessary, but to participate, you have to sign up in person directly before the show. It’s advisable to arrive by 7:15, when the doors open, if you want to get your name on the list. Each performer is given three minutes to make an impression, and any topic is fair game. The two-hour open mic is a warm-up for the evening’s featured act. New England poet Ryk McIntyre and Jade Sylvan, the author of Kissing Oscar Wilde, as well as a number of National Poetry Slam competitors and college students have been among the performers.

The night concludes with a fast-paced poetry slam. The first eight people to sign up are entered into the competition. The three-round, head-to-head contest provides a $10 prize and a spot in the Champion of Champions poetry slam. Props, costumes, or musical accompaniments are not allowed. A panel of audience members judges each round and decides the winner. The goal is to engage the audience with originality and style.

The broad range of topics presented on stage is just one enjoyable aspect of the weekly event. The night we stopped by, a local resident delivered a haiku about the crowded Boston streets during college move-in weekend. Another poet recounted her experience getting an abortion while she was an undergraduate at a local school. The show’s key feature is the overwhelming sense of community it fosters. In an encouraging show of support, the same ovation is given to novices as to veterans. The featured act the night we were there was seven-time National Poetry Slam veteran Mckendy Fils-Aimé, who has published three chapbooks. He read from recent work, including “For Those Who Whistle Vivaldi,” which details the African American experience, and “Prayer in the Cracks,” a nostalgic account of his childhood. Fils-Aimé delivered his poems with energy and a cool confidence that the audience fed off of.

During the closing slam, the audience decides which poets get to advance in the competition. This night’s finalists were Jess Riz, editor of the blog and literary magazine Maps for Teeth, and New Hampshire poet Emily Eastman, whose quirky take on feminism and other social issues won the crowd over. As the slam winner, she received an invitation to return to compete in the Champion of Champions slam later this month.

Be forewarned. This is not a quiet crowd. There is always someone in the audience shouting out words of support or erupting in laughter even when a poet’s jokes miss the mark. The ticket collector and the slam’s host have been known to participate by flaunting some of their own rhymes. Anyone who wanders into the basement of the Cantab Lounge can become a part of the act.

The featured speaker tonight, Wednesday, September 8, is New York City poet Ocean Vuong, winner of a 2014 Pushcart Prize, whose work has appeared in such publications as Poetry, The Nation, and Guernica. American Poetry Review awarded him the 2012 Stanley Kunitz Prize for Younger Poets. Featured next week will be Andrew Campana, a Canadian poet working on a PhD at Harvard, in Japanese literature and media studies, and Austin poet Jena Kirkpatrick, who has competed in two National Poetry Slam competitions.

Seating tops out at 75, with an audience limit of 100, so it’s best to get there by 7:15. The event is 18+, photo ID required. The bar serves alcohol (21+) and guests can bring food. The Cantab basement is not wheelchair-accessible.

The world’s third longest running poetry slam, the Boston Poetry Slam offers a chance to experience original, contemporary work in a relaxed setting. It shows that despite the prevalence of computers and smartphones, spoken word will always be a mainstay in popular culture.

The Boston Poetry Slam is held every Wednesday night in the basement of the Cantab Lounge, 738 Massachusetts Ave., Cambridge. Doors open at 7:15 p.m. The open mic begins at 8 p.m. and the featured event at approximately 10 p.m. The open poetry slam follows at 11 p.m. The show is 18+ (ID required) and the cover charge is $3. To get to there by public transportation, take an MBTA Red Line Train to Central Square.

Brandon Lewis can be reached at bmlewis@bu.edu.