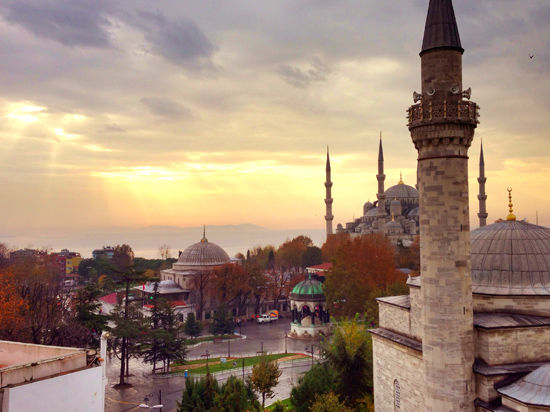 A new College of Arts & Sciences undergraduate major, Middle East and North Africa studies, takes an interdisciplinary approach to studying the language, art, and literature of rich cultures, including Turkey, pictured above.

As interest in Middle Eastern studies grows, BU students with a scholarly passion for the region’s languages and culture have been accustomed to cherry-picking related courses. But with the creation of a new College of Arts & Sciences undergraduate major in the modern languages and comparative literature department, students can now major in Middle Eastern and North Africa (MENA) studies, a course of study that corrals offerings in the region’s four spoken languages as well as the humanities, social sciences, and geography. The program, which has counterparts in many American universities, is an exciting development for BU and one that is overdue, says Margaret Litvin, a CAS associate professor of Arabic and comparative literature. As of the fall MENA will be part of the new Frederick S. Pardee School of Global Studies, and “in being brought together with the other global programs it will be even stronger,” said Virginia Sapiro, dean of CAS.

“In 2010 one of our gifted Arabic students asked why she couldn’t major in Middle Eastern studies in an integrated way, without having to choose between the cultural and political aspects,” says Litvin. Although the University offers a major in Asian, European, and Latin American studies, and Jewish studies is offered as a minor, there was no MENA major to embrace the cultures of the entire Middle East and North Africa, including Iran and Israel. “It was a gaping hole,” says Litvin, who is fluent in Arabic and teaches Arabic literature, including an entire course on Scheherazade and the many incarnations of the classic folk tale One Thousand and One Nights.

BU’s newest Bachelor of Arts program was approved in October by the University Council. The interdisciplinary major was born out of a three-year planning effort by a group of faculty specializing in the region, and offers, according to the CAS website description, “a coherent grounding in the history, cultures, artistic production, and one or more of the languages of the Middle East and North Africa region.” Students must complete three years of language study as well as courses in both humanities and social sciences, preparing graduates for careers in “government, international nongovernmental organizations, and the private sector by building marketable skills (cultural competence and real linguistic proficiency) as well as intellectual sophistication.” The MENA majors who kicked off the program’s first year have career aspirations ranging from Arabic literature to Middle Eastern–focused international law.

“It is obvious that we needed this,” says Michael Zank, a CAS professor of religion and director of the Elie Wiesel Center for Judaic Studies. “Student interest in the Middle East runs high, for obvious reasons. What we had so far, a specialization within international relations in North Africa and the Middle East, did not particularly encourage the study of languages. The new MENA program counts advanced language courses toward the degree. To me language is the key to a civilization, and one cannot study the Middle East without acquiring a taste for its intricate and diverse cultural heritage.” From the perspective of Jewish studies, he adds, “I am delighted to see Israel studies and Hebrew recognized as part of Middle East and North Africa studies. MENA faculty, especially Margaret Litvin, should be commended for creating a model program that is culturally sophisticated and based on inquiry rather than advocacy.”

“The students are so motivated,” says Litvin, who has arranged class dinners at local Middle Eastern and North African restaurants, such as Baraka in Cambridge. In class discussions and debate, she has asked students to argue for a particular side whether they embrace that point of view or not, to dig deeper into western assumptions about Islam or the Israeli-Palestinian conflict. Litvin sees the students majoring in MENA as scholarly ambassadors in a way. The more they learn, the more they can correct the misconceptions that abound all around them. “It’s part of being an educated American,” she says, and an opportunity to get your personal feelings off the table and find common ground.

They inaugural MENA majors are a diverse group. Some of the three freshmen, eight sophomores, and six juniors are carrying double majors. The program is graduating its first three seniors next week. For their language requirement the students have chosen Arabic, Persian (Farsi), Turkish, or Hebrew. They selected course offerings ranging from Islamic Art and Architecture to the History of Israel to courses in the postcolonial novel and Persian and Arabic literature.

“I think it’s critical for our foreign policy to study the Middle East,” says Danielle Liberman (CAS’17), who hopes to pursue a career in international law. “All the MENA courses reflect different critiques of the region.” Liberman is planning to take an international law class this summer that focuses on Africa. The MENA degree offers the broad cultural perspective her intended major in international relations could not provide, she says.

Liberman is Jewish, grew up in New Jersey, and is one of several MENA students who have spent time in Israel.  “We’re a very diverse group, which makes for interesting conversation,” says Liberman, one of three MENA students who study Hebrew. “I know I have a different viewpoint than some people in my group. I’m a member of Hillel, but there’s someone in my class who’s involved in Students for Justice in Palestine. But everything that’s been said has been said calmly.” It’s understandable that certain viewpoints might offend, she says, but the class has respectful, intellectual give-and-take.

“This program allows our students to study parts of a vast multilingual region that is also diverse in cultures and religions, not just through a traditional disciplinary approach, but also from comparative and transdisciplinary perspectives,” says Sunil Sharma, a CAS associate professor of Persianate and comparative literature and chair of the modern languages and comparative literature department. “It also encourages students to study and work with faculty who are linked in their teaching and research interests by designing an individual and innovative curriculum.”

Like many of her fellow MENA students, Liberman has had “a passion for this field my entire life.” She was reading one of her favorite Arab Spring blogs when she got the BU email announcing the new major. “I immediately knew I wanted to do this,” she says. “Next fall I’m taking five MENA classes.”