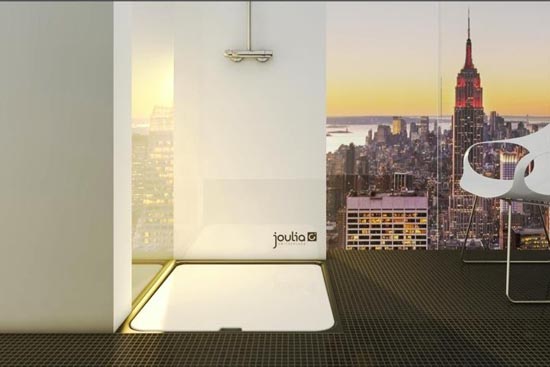 The Joulia shower system conserves heat and consumes 25% less energy than a typical shower. It is one of more than two dozen innovations on display in Watt d’Or—Swiss Energy Excellence, a new exhibit at Northeastern University. Photo courtesy of Joulia

Headlines trumpeting global warming, rising sea levels, and depleted ozone herald a bleak future. But a new traveling exhibit currently on view at Northeastern University suggests that when it comes to energy, the future could be brighter (and more sustainable) than we think.

Titled Watt d’Or—Swiss Energy Excellence, the show features 25 pioneering energy projects developed in Switzerland that have been honored with the Watt d’Or, an award established in 2007 by Switzerland’s Federal Office of Energy. The prize is given to projects that are helping to create a more sustainable future in one of five fields: mobility, renewable energy, building efficiencies, energy technology, and systems and appliances.

One of the most striking of the projects on display is Solar Impulse’s HB-SIA aircraft, which was awarded a Watt d’Or in 2011. The plane is powered exclusively by solar energy and is capable of flying 26 hours straight, day or night, as it did on July 8, 2010, when it set three world records for a solar-powered airplane: flight duration, maximum altitude ever reached, and gain in altitude. Solar Impulse is hoping the HB-SIA earns yet another distinction: the company is preparing to attempt the first ever solar-powered airplane flight around the globe some time within the coming year.

The Holzhausen, another project that is part of the show, is Switzerland’s first six-story residential building made of timber. It won the Watt d’Or in 2007 for highlighting the use of timber as a building material and for its minimal energy consumption. The entire structure, with the exception of the basement and stairs, is made of wood—a renewable building material that requires little energy to produce, provides excellent insulation, and is highly durable. Since construction began on the Holzhausen, several timber structures have been built in Switzerland, including the seven-story headquarters of Switzerland’s largest daily newspaper, Tages Anzeiger.

Other projects on view include the Green Datacenter, (2013 winner), a cost-effective data warehouse that uses 20 percent less energy than the typical storage unit; Joulia (2013), a shower system that salvages heat energy from drained shower water, thereby reducing its energy use by 25 percent; and the PAC-Car II, a vehicle powered by a hydrogen-converting fuel cell that has achieved distances of 3,300 miles using the fuel equivalent of slightly more than two pints of gasoline—the current Guinness World Record for fuel efficiency. What’s more, the vehicle boasts zero carbon dioxide emissions.

The exhibit is part of a larger effort to promote energy innovation and enhance collaboration among Swiss and US researchers. Last week, more than 70 Swiss scientists, government officials, entrepreneurs, and organizations associated with the energy sector were in Boston for Swiss-US Energy Innovation Days, during which Swiss representatives presented the latest in energy technologies and innovations to several organizations in Boston and participated in a workshop.

“Both Switzerland and the US share the mutual objectives of lowering our carbon footprint, increasing resiliency, and reducing dependency on non-sustainable energy sources,” wrote Doris Leuthard, Swiss federal councilor and minister for energy, environment, transportation, and communication, in the catalog accompanying the exhibit. “Showcasing the Watt d’Or project in Boston is a perfect opportunity for enhancing and encouraging the dialogue and collaboration towards a greener technological development.”

The Watt d’Or exhibition is on display today through September 14 in the lobby of the International Village at Northeastern University, 1155 Tremont Street, Boston. The gallery is free and open to the public daily from 7 a.m. to 8 p.m. For more information about the exhibit, click here.

Via public transportation, take an MBTA Green Line trolley to Copley. Walk over to Back Bay station and take an Orange Line train headed to Forest Hills and get off at the Ruggles stop.