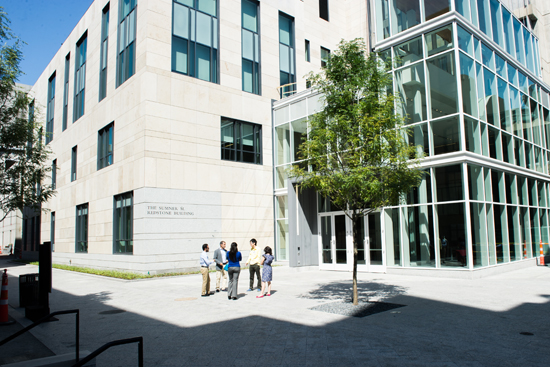 The Boston University School of Law was ranked second in the “best professors” category in the 2015 Princeton Review. Photo by Tim Llewellyn

“Some of us were admitted to Harvard but chose BU due to its focus on teaching, its small class size, and its generous financial aid.”

That quote won’t have huzzahs ringing across the Charles River, perhaps, but it’s among the accolades that earned high ratings for the School of Law in the 2015 Princeton Review ratings. LAW ranked second in the “best professors” category (Duke came in at number one) and seventh in “best classroom” experience among 169 law schools surveyed by the rating-and-test-preparation firm.

The Review surveyed 19,500-plus law students nationally and collected information from school administrators to come up with its annual rankings in 11 categories. Other categories besides professors and classroom experience included “best career prospects,” “toughest to get into,” “best quality of life,” and “most diverse faculty.”

“BU was one of the first law schools to admit women and minorities,” the Review notes, “and continues its commitment to diversity with a stunningly broad range of specialized programs for law students,” including 16 dual-degree programs, 18 study-abroad programs in English and foreign languages, and numerous work opportunities in the “professionally target-rich surrounding city of Boston.”

“BU Law professors are willing to help you one-on-one and be honest about what they see as your areas needing improvement,” says Jean-Phillip Brignol (LAW’15). “The administration also focuses on hiring smart professors that are at BU Law to teach and are good at it generally. They will be there by appointment, or in their office hours, and offer review sessions.”

He also lauded the school for creating Critical Conversations, a program that discusses and celebrates the student body’s diversity, from the transgendered to women and minorities. Beyond fostering a hospitable campus, Brignol sees a professional advantage in training lawyers who “are better able to engage in a complex world.”

Ashley Tan (LAW’15) says she has been impressed by professors in large lecture classes who “follow up with me on concepts I was previously confused about. It means a lot that they remember what individual students struggle with.” Faculty members make class material more engaging by linking it to where individual students are from or what they’ve said in class before, she says. “It makes class a lot more interesting and builds community in a way I never thought it could have.”

The Review quoted anonymous students saying that LAW’s professors are “the top of their field” and “love their areas of law, and they love teaching. They go out of their way to be accessible—even offering their home phone numbers.”

LAW Professors among the Best, Princeton Review Says
0
share this