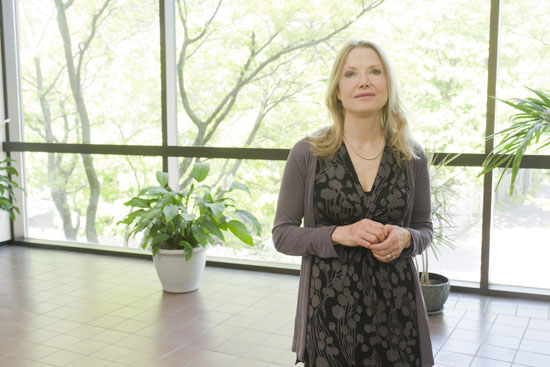 Susan McGurk, a Sargent College associate professor of occupational therapy, has developed a cognitive remediation program that is helping adults with severe mental illness compete for and hold on to jobs. Photo by Vernon Doucette

In Brooklyn, New York, a man with a bipolar disorder who long had difficulty attaining the work he wanted, now owns a limousine company and holds down a second job. In Portland, Oregon, a man with schizophrenia who never had the confidence to seek employment unassisted recently prepared a job application and went on an interview by himself.

Their triumphs are both unusual and encouraging: despite a desire to join the workforce, roughly 80 percent of people with a severe mental illness are unemployed. But these men participated in Thinking Skills for Work (TSW), a cognitive remediation program developed by Susan McGurk, a neuropsychologist and a Sargent College associate professor of occupational therapy that is having considerable success in enabling those with a severe mental illness to better compete for—and maintain—a job.

“Part of the criteria used to define severe mental illness and eligibility for disability benefits is functional impairment,” says McGurk, who is also a senior researcher at the BU Center for Psychiatric Rehabilitation. “There are a variety of symptoms that interfere with working, and those include cognitive difficulties: deficits in areas such as paying attention, learning new information, remembering what you learn, planning, and following through on a plan. These skills tend to be hit rather hard by severe mental illnesses such as schizophrenia and major depression, making it difficult for people to find and keep work.”

A standardized, 24-session computer intervention, which is based in part on cognitive training software known as Cogpack, is one of the standout aspects of TSW. “We developed a training curriculum and tested it in six randomized controlled trials,” says McGurk. “We have found that it benefits cognitive functioning across the different trials.”

The computer program offers exercises in a range of skills, including memory, attention, reasoning, planning, and processing speed. One exercise, called Route, is a street map with five circles representing destinations. The goal is to visit each destination in the shortest distance possible, staying on the street grid. “Some people in our New York City studies want to get a job as a courier,” says McGurk. “We use this task to highlight the planning involved, for example, in being a courier. We’ve had people enrolled in our studies who had lost jobs in the past because they hadn’t planned the route ahead of time and took too long to deliver the packages.”

McGurk recalls a client who lost a restaurant job because he lacked the necessary coping strategies and couldn’t finish his tasks on time. Initially, speed seemed to be the issue. “But we saw that he tried to avoid some of the more sustained attention tasks on the computer, and it turned out that he’d had trouble focusing,” says McGurk. “So we kept an eye on the attention tasks that came up in the curriculum to make sure that he was progressing.” When the client eventually got a job, he and his cognitive and vocational specialist determined that he needed a discreet prompt that would help him stay on task. “They came up with a vibrating watch, so that his coworkers have no idea that he’s receiving prompts every 10 minutes.”

Studies show that working has huge benefits for people with severe mental illness. “It can aid symptom management because people have a regular schedule,” says McGurk. “It reduces stigma. Coming in contact with other people, they often make more friends. And people who are working report a higher quality of life.”

Jeff Krolick, administrator of the Oregon Supported Employment Center for Excellence, brought together seven community health programs across his state in 2012 to launch TSW. “The program is so thorough,” he says. “It enables you to look at the job-retention process in a skill-development way. As people worked with the computer-assisted cognitive software, it allowed us to see, in a very real situation, what kind of supports they needed. And I saw people gain confidence as they practiced the skills through the cognitive strategy class.”

McGurk and her colleagues recently received a $2.7 million grant from the National Institute of Mental Health for a five-year study to evaluate TSW. “Cognitive programs have become increasingly bundled, as ours is, so it’s not clear what’s necessary,” says McGurk. “We know it works: we’ve done multiple randomized controlled trials. We’ve decided to see whether the computer cognitive training—the most expensive component—is critical to improving cognition and work outcomes or whether it’s enough to provide coping and compensation strategies for dealing with cognitive challenges.”

Early in her career, McGurk heard a participant in a study tell a psychiatrist, “I want a job because I want to be like everybody else.” She says that simple declaration “struck me more than any other statement I’ve heard.” That life-changing goal now seems to be within reach for those with cognitive impairment, thanks to McGurk’s work.

There are 3 comments on Eager to Work