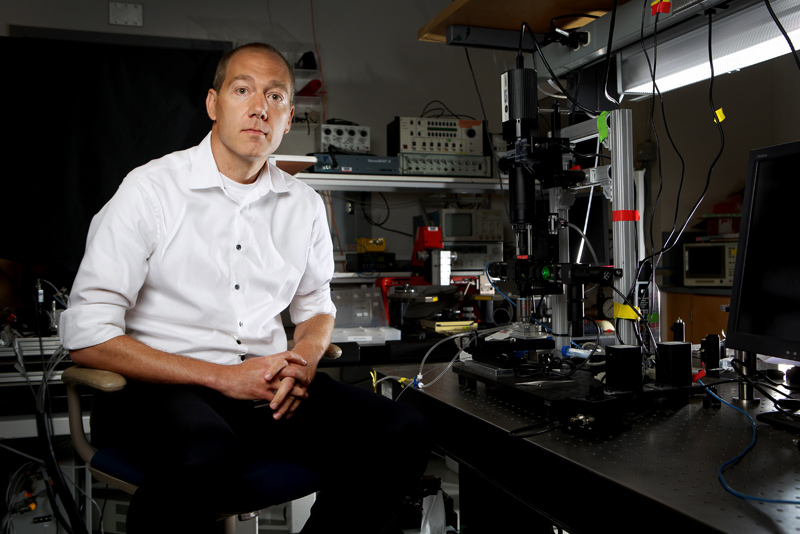 In October 2014, nurse Kaci Hickox returned to her home in Maine after treating Ebola patients in Sierra Leone with the group Doctors Without Borders. State officials ordered her to stay in her house for 21 days—the longest possible incubation period for Ebola—even though she showed no symptoms of the disease. Hickox defied the quarantine, setting off a swirl of controversy among state officials, civil rights advocates, legal experts, health care workers, and scientists. Her 21-day monitoring period ended on November 10, without incident.

The Hickox case highlights a thorny problem with the Ebola virus and similar hemorrhagic fevers—a person can be infected long before they show symptoms, and before doctors can diagnose the disease. This can lead to delays in treatment, controversial quarantines, and unnecessary fear.

Now, researchers from Boston University’s School of Medicine (MED) have developed a way to detect signs of infection before the virus enters the bloodstream and symptoms emerge. By examining RNA within circulating immune cells, they have been able to detect—and distinguish—infection by two different hemorrhagic fever viruses, Marburg and Lassa, before they could be detected in the blood. Their research was published in the journal BMC Genomics. They are now testing whether the technique will work for Ebola as well. Although the research is still preliminary, the ultimate goal is to provide an alternative diagnostic tool for Ebola and other hemorrhagic fevers.

“We want to catch it early, before symptoms emerge and the person becomes contagious,” says John Connor, senior author on the study, a MED associate professor of microbiology, and a researcher at Boston University’s National Emerging Infectious Diseases Laboratories (NEIDL). “The earlier one can start treatment, the more likely the patient is to survive.”

Hemorrhagic fevers are a tough nut to crack. When a person first becomes infected, the virus is not detectable in the blood. After an incubation period, virus particles spill out of cells into the patient’s bloodstream, where it can finally be detected by conventional methods. At this point, the person becomes contagious and also develops symptoms, like fever.

“Fever is a good indicator of disease, but it’s not specific,” says Connor, noting that many diseases, from malaria to influenza, also show fever as an early symptom. “The question we asked was: ‘can you detect infection before the fever, and also get specific information about the disease?’”

The research team decided to look inside white blood cells of infected monkeys to see if the cells themselves showed any changes that might signal infection. They worked with collaborators Jay Goff, Anna Honko, and Lisa Hensley at the US Army Medical Research Institute of Infectious Diseases (USAMRIID), who infected one group of macaques with Lassa virus and another with Marburg virus. The USAMRIID researchers took samples of white blood cells at several different times after infection. Then, they extracted messenger RNA (mRNA)—the molecule responsible for transcribing genes into protein—from the cells and sent it to MED for analysis.

The scientists suspected that the white blood cells might recognize an infection early and activate genes to help fight it. And if certain genes were activated, there should be a corresponding uptick in the amount of mRNA in the cells. This technique has been used successfully in the past for detecting influenza, bacterial infections, and respiratory syncytial virus (RSV), according to Ignacio Caballero, a PhD candidate in the Graduate Program in Bioinformatics and lead author of the study.

“People have found distinct differences in mRNA during bacterial and viral infection, without trying to detect the virus or bacteria itself,” says Caballero. “It makes sense that the immune system would respond before the virus is visible in the blood. This gives us the advantage of seeing patterns in the cells, rather than pathogens in the blood.”

“The immune cells definitely knew that there was something going on. We saw very specific changes to gene expression,” says Connor. Most of the hundred or so genes turned on in the immune cells were the same for both the Lassa and Marburg monkeys, a general immune response alerting other cells to the presence of a viral invader. But the scientists also found that a handful of the activated genes were different, allowing the scientists to distinguish between cells infected with Lassa versus those infected with Marburg.

The scientists weren’t focused on what the unique genes do, as much as on how soon they could detect the changes. “How fast can we get to an answer?” asks Connor, who notes that treatments differ among hemorrhagic fevers, and early intervention can be the key to survival.

The team is now expanding the research in two directions, using the technique to try to detect Ebola in primates, and also testing human blood samples from the field for similar patterns of gene expression.

Caballero notes that much more work is needed before these techniques are practical for widespread use. But he hopes that the work will eventually lead to a better understanding of these diseases. “We want to expand our understanding to make detection earlier,” he says, “but we also want to pinpoint specific genes that are activated during infection. We hope that could open some doors and move the field forward.”