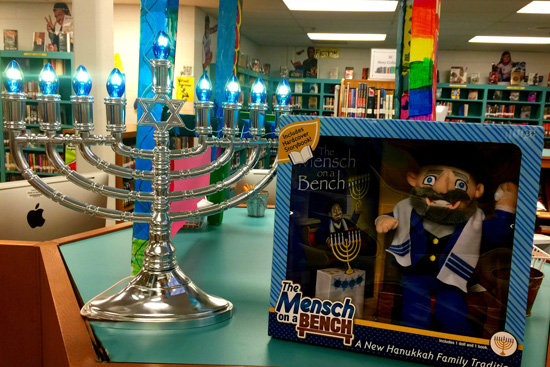 The Hanukkah Mensch on a Bench was inspired by a Christmas-themed gift. Photo courtesy of Gwyneth Anne Bronwynne Jones

Would Jonathan Klawans keep Mensch on a Bench on his shelf? “If somebody sent it to us, probably,” he says genially. The College of Arts & Sciences professor of religion can even envision buying the Hanukkah themed doll-cum-book—a twist on the Christmas Elf on a Shelf—as a holiday gift for his kids.

Klawans, a scholar of ancient Judaism, including Hanukkah’s roots, isn’t bothered that the eight-night Festival of Lights, beginning tonight, increasingly mimics Christmas in the merchandising arena. You can buy a six-foot, pine garland–shrouded Menorah Tree, shaped like the nine-armed candelabra; Hanukkah houses, to build while your Christmas-observing friends construct their gingerbread abodes; and Maccabee on the Mantel, another doll and book inspired by both that shelved Elf and the Hanukkah origins story in the books of 1 and 2 Maccabees.

Those books, which aren’t part of the Hebrew Bible but are considered scripture by some Christians, recount the victory of the Maccabees, Jewish rebels who in 164 B.C.E. defeated the ruling Seleucid Empire. The famous story of a tiny amount of oil burning miraculously for eight nights when the Maccabees rededicated the Jerusalem Temple was first told in the Talmud, the great rabbinic text, about 600 years after the victory.

To be sure, Klawans reveres the importance of the story: “This notion of Jews standing up for themselves, defending themselves—that has tremendous reverberations in the post-Holocaust world.” He says modern Hanukkah merchandise also taps Judaism’s “pretty strong tolerance for humor.”

BU Today spoke with Klawans about the evolution of an ancient holiday.

What an American Jewish child would think of as Hanukkah customs—the lighting of the menorah, the foods and gifts—when and where did they originate?

Klawans: Lighting lights in some fashion may well go way back. We know of [it] from rabbinic literature, attributed to groups that are believed to have functioned before [or] after the destruction of the Temple in 70 C.E. Somewhere in between that and the 600s is probably [accurate]. The earliest times would have [involved] clay lamps; the custom changes with the invention in the Middle Ages of the nine-branched special menorah for Hanukkah.

Other customs—the use of potato pancakes fried in oil is an eastern European custom, fried food sort of connecting with oil. It’s also not a custom across all streams of Judaism. Sephardic Jews actually use jelly doughnuts in Israel. They’re looking now like what you get at Dunkin’ Donuts, but it’s fried, sweet, celebratory. These food folk customs are not of great liturgical [significance]. It doesn’t compare, for instance, to the eating of unleavened bread on Passover, which is a very serious custom that has biblical precedent.

How did the giving of gifts at Hanukkah begin?

Little gifts and bits of money would be given in eastern Europe in early modern times [the 15th to 18th centuries]. The idea of a gift every night or substantial giving arrived with the commercialization of Christmas in the United States.

Are you bothered by this Christmas-ification of Hanukkah?

As a scholar, it’s not my job to be bothered about these things but to understand them. Hanukkah doesn’t rank on the same level in the Jewish tradition as Christmas does for Christians. Hanukkah is a decidedly lesser festival: it’s not like Passover, Yom Kippur, Rosh Hashanah. It’s widely celebrated as a happy day, and these things that, within reason, make it happier don’t cause a threat.

There’s an irony: Hanukkah starts out as this [Maccabees] rebellion against a certain acculturation, yet it [now] takes on a certain level of acculturation. People often wonder, does Hanukkah go back to festivals of light in Persia or Babylon? It’s possible. A potato pancake is an eastern European food. There’s a tremendous amount of joyful creativity around Hanukkah. Every year, there are new Hanukkah videos, Hanukkah songs, and often they’re funny. Within the Jewish tradition, you can make fun of almost everything.

Part of what’s nice about Hanukkah is that it’s supposed to be public. Going back into the Talmud, the menorah was supposed to be lit in the window, so that people could see that this is a Jewish house, see the celebration, and see the joy. Often, very traditional Jews get behind this idea of lighting a menorah in public. One can look at that as a Jewish answer to the Christmas tree in public, but that’s not the full story. This is building on aspects of Hanukkah that go way, way back. And Hanukkah is a unifier. Lots of Jews celebrate Hanukkah, even Jews who don’t celebrate as much the other holidays. I don’t think these things are viewed as a threat. It’s America, right?

How do you and your family celebrate Hanukkah?

We give gifts. We do a lot of Hanukkah songs and sing. Not Adam Sandler—we haven’t played that one for them yet; our kids are 11, 8, and 5. And [we tell] the story in an age-appropriate way, which is easier than it has ever been, because there is a whole industry of children’s Hanukkah books of the Maccabees.

My wife and I, along with many modern Jews, also bring out in our celebrations the hopes for peace that are expressed within the Jewish tradition, as well as some of the modern Hanukkah songs. Peter Yarrow’s Light One Candle, for instance, is among the Hanukkah songs sung in our family observance. And when we listen to [American reggae rapper] Matisyahu’s Hanukkah songs, we are sure to play his One Day for our children as well.