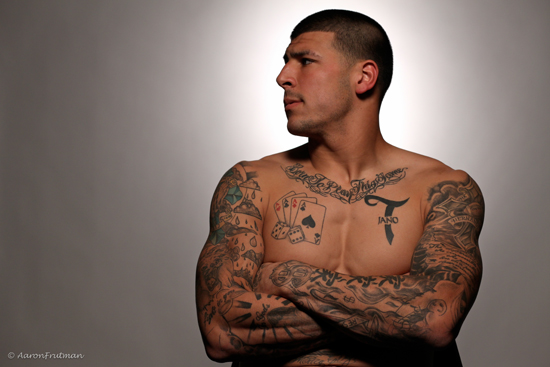 When former Patriots tight end Aaron Hernandez was arrested last Wednesday on murder charges, he joined a laundry list of NFL athletes who have been charged with violent crime. Photo by Aaron Frutman/NBC Sports

With much yet to be revealed about Aaron Hernandez’s alleged role in the murder of acquaintance Odin L. Lloyd, fans are left wondering if there were warning signs that the NFL and the New England Patriots failed to pick up on. When the former Patriots tight end was arrested last Wednesday on murder charges, he joined a laundry list of NFL athletes, including Rae Carruth—serving 24 years for murder—and Ray Lewis—connected to two 2000 murders—who have been charged with violent crime. (Hernandez, who signed a seven-year, $39.768 million contract in August 2012, was cut from the team after he was arrested, so he will lose much of the money.)

While the Patriots say they had no inside knowledge of the case before they cut Hernandez, Adam Naylor, a School of Education clinical assistant professor of counseling and human development and sports psychology, says there were clues at least to the potential for trouble. Naylor has more than a decade of experience educating and coaching Olympians, major and minor league sports professionals, and collegiate athletes.

BU Today spoke with Naylor (SED’97,’01) about Hernandez’s mistakes, the NFL’s responsibility to help young players, and the danger of turning athletes into celebrities.

BU Today: You’ve been following this case—what strikes you as the most interesting thing about it?

Naylor: Interesting is a funny word. Interesting almost makes it seem positive. I’d probably say the absolute tragedy of it, because it’s so tragic on so many levels. It’s beyond an NFL player getting arrested, which unfortunately is too often par for the course. Its scope and scale is arguably something we have never seen from an active player.

Is there anything in Hernandez’s past that would suggest to a sports psychologist the potential of his doing something like this?

The more I look at it, there were red flags everywhere. A challenge in pro sports and in college sports is that talent can be very tempting. Hernandez’s father passed away when he was young. Your peers are going to fulfill that role in your life pretty quickly. There are thoughts that they could have had gang connections. Every NFL team is investing lots of money in these players, so they had this information. Especially now, we hear about all of these other things coming out—it was there if people chose to see it.

Are sports psychologists ever involved in the decision of whether or not a risky player should join a team?

Come draft time, everyone gets interviewed and assessed by a psychologist. Some sort of psychological testing happens every year.

Hernandez said at one point that he felt he couldn’t trust anyone. Is it a cultural problem within the NFL if a young player feels that he doesn’t have any allies? Is it a team’s job to build a community?

A team certainly can build a community, although it can be very difficult on a professional level because everyone in essence is trying to take each other’s job. I think it really takes a philosophy and a commitment. I do think the Patriots have that. I’ve known the Krafts for a while now, and as a family they are committed to building community culture. I think a deliberate approach is important. It needs to be a real relational person-to-person contact. Hopefully that can help, because there are always some that slip through the cracks. But as I said, this one is just so grossly tragic it’s beyond slipping through the cracks.

Mentorship is important, where older players spend time with younger players. But that is really not our pro sports culture. It truly is: go to work, punch your time card, and leave, and you hope good people surround you. There’s a real necessity—especially if someone seems to not have a great history or a great crowd—to foster and nurture younger players in an intentional way, but not in a contrived way. The NFL holds a rookie symposium, but it’s just wagging your finger at kids who aren’t listening. They talk about how to stay out of trouble, how to manage your money, a lot of basic life skills stuff, and then how to handle yourself as a celebrity because of bad things that can happen. I heard that there is a guy that stands in front of them and says, “Prepare for the fact that your career could end in three years.” They’re touching on all of the right topics, but I’m not sure it ends up as relational as it could sometimes. But that’s the challenge of pro sports.

With a young player’s sudden onset of wealth and fame, should it be part of a team’s job to teach players how to be responsible adults?

I hope so, but again it’s incredible effortful and incredibly relational. It’s not just about telling people—it’s about showing and supporting. When they fall down, make sure you’re there to pick them up as quickly as possible. The challenge of that in sports is that if you fall down bad enough, the team will get rid of you pretty fast.

I think it even makes sense on the college level—how do we create cultures to teach players these life skills? I would argue that college is a better spot for these lessons than in big-time football. People talk about life skills, what are you going to do when the sports end, but these colleges need to talk about when sports continue and advise these players on how to carry themselves. College programs need to prepare young men to play football and at the same time be able to survive as a human being in the world.

What should a team do when one of its players is placed under this kind of scrutiny?

Many young lives have been ruined; right now people are washing their hands of it and letting the legal system do its job. I have some colleagues who work for the NFL Players Association, and they will bust their butts to help a player, because that’s their job. But once the legal system kicks in, they have to step back. This is at the level where I think unless the coaches see a player they think may follow in his teammate’s footsteps, they have to move on.

What about the cult of celebrity and the attitude of invincibility that some players may have? How do you speak to a young athlete about this?

It takes a real balance, and it’s more artful than it looks. Part of it is to be there for the kid. I know from experiences with kids that even the toughest athlete, if something goes bad for them, they’ll lean on you in a soft way. So I think trying not to get frustrated with these players is important. Model the right behaviors and make tough decisions. We start our hero worship with athletes quite young. Celebrate athletic achievement, but don’t celebritize them. Because the second you celebritize them, you start to get this empowerment that follows. It’s a hero worship rather than, “Nice job, you worked hard today.” I think a coach has to be wary of that in this day and age, where every coach acts like a scout, saying who is good and who is bad. Most players are somewhere in the middle when they are developing, and I think we have to respect them like that.

Was Patriots’ Hernandez a Time Bomb?

There are 21 comments on Was Patriots’ Hernandez a Time Bomb?