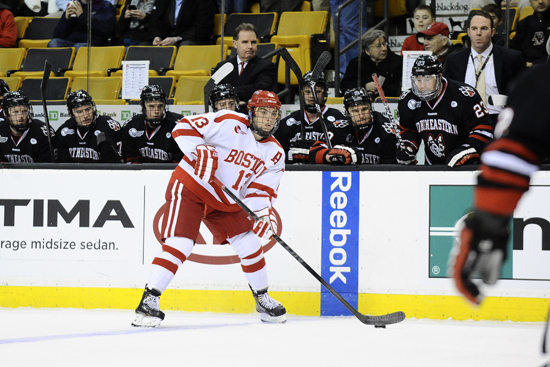 The rafters above Agganis Arena’s Jack Parker Rink are full of history. Banners displaying 29 Beanpot victories, 5 NCAA championships, and 12 Hockey East titles hang above the ice, informing fans that for decades BU hockey has been a Division I powerhouse and reminding David Quinn that he is in the driver’s seat of one of the most respected organizations in college hockey. Quinn (CAS’89), who took the reins as head coach after 40-year coach Jack Parker (SMG’68, Hon.’97) retired last spring, played for Parker from 1984 to 1989 and was one of his associate coaches from 2004 to 2009. He still talks almost daily to his former coach, who he says has had a big influence on his own coaching style.

“One of the things I learned from Jack is that you have to be demanding, but fair,” Quinn says. “You need to make the players understand that they’re accountable, because everything we do is geared to making them better players, better people, and better students.”

At team practices, Quinn routinely interrupts drills to demonstrate better ways to pass or move without the puck. He requires players to repeat plays until they are split-second perfect and finally win praise from their coach.

Cocaptain Pat MacGregor (CGS’12, COM’14) is one of seven upperclassmen on the roster. Now in his fourth season as a defenseman, MacGregor says the  team is responding well to the new coaching staff.

“We’ve all bought in to the system Coach Quinn is running,” he says. “Practices have been very high-tempo, and we’ve been working hard on our conditioning all summer. I think the team is ready to compete at a high level.”

Cocaptain and fellow defensemen Garrett Noonan (MET’15) says the season is starting with high expectations. “We’ve always been focused, but this year I think the team is closer together,” he says. “Everything we do in practice simulates game-like scenarios, so we’re expecting to get off to a good start and outwork other teams.”

The Terriers ended the 2012-13 season on a hot streak, winning seven of their last eight games before falling to the University of Massachusetts, Lowell, in the Hockey East finals. They finished the season with a 21-16-2 record.

The team welcomes back four of last season’s top six point scorers, among them standout forward Danny O’Regan (SMG’16). As a freshman, O’Regan led the team with 38 points, off 16 goals and 22 assists. He is part of a talented class of 2016 that includes defenseman Matt Grzelcyk (CAS’16), who was drafted by the Boston Bruins in the third round of the 2012 NHL Entry Draft. These Massachusetts natives made huge contributions as freshmen, and MacGregor believes that this year’s incoming class, which has six players from the area, can also succeed.

“Local guys grow up watching BU hockey, and they see the history and tradition imbedded in this great program,” he says. “They all grew up wanting to play here, and they’ll do whatever they can to help us win. That’s important, because they’ll get thrown right into the fire with the numbers we have.”

Quinn and his coaching staff are doing everything in their power to prepare them for the heat. “Everything that we do in practice is at a game-like speed with a game-like mentality,” he says. “That’s something that a lot of guys aren’t used to, but it’s all part of the learning process and the growing process. They need to understand when they come here that they have to have the same mentality on Monday as they do on game day.”

Preparation will be key for the Terriers as they begin a tough conference schedule tonight, going up against the University of Massachusetts. BU is ranked 19th in the country according to a USCHO.com poll, but the team was picked to finish 6th in Hockey East. The Terriers play in a conference with 5 of the top 15 schools picked in USA Today/USA Hockey Magazine’s national preseason poll, including new member Notre Dame, so qualifying for the NCAA tournament will require a season of near-perfect performance.

This year, Hockey East moves from a 27-game schedule to 20 games, which allows BU to host a record eight opponents from outside the conference. That nonconference schedule includes two former national champions—Wisconsin and North Dakota. Altogether, the Terriers will  face 9 of the 18 other programs that have won a national championship.

“The bottom line is we’re trying to get better every day,” Quinn says. “As long as we’re putting forth the effort, and playing with a great pace in practice, it should give us a great chance to have success.”

The BU men’s hockey team takes on the University of Massachusetts at 7 p.m. tonight, Friday, October 11, at Agganis Arena, 925 Commonwealth Avenue. Tickets are $20 for BU students, faculty, and staff and $25 for the public. Tickets may be purchased ahead of time here or at the Agganis Arena ticket office.