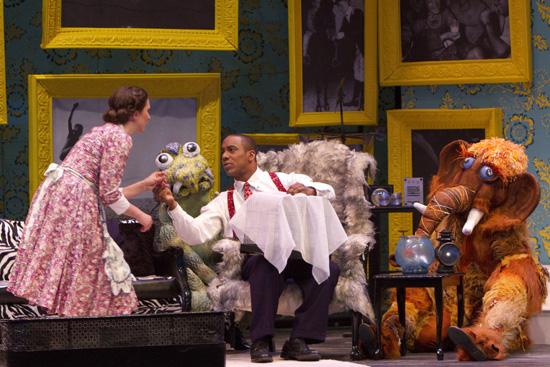 Lorne Batman (CFA’13) (left) and Hampton Fluker (CFA’13) play Mr. and Mrs. Antrobus in CFA’s production of The Skin of Our Teeth, running through Friday at the BU Theatre. Photos by Chitose Suzuki

A multimillennial parade of catastrophes both natural and manmade threatens to wipe out an average American family, yet they and the human race survive in Thornton Wilder’s 1942 comedy The Skin of Our Teeth. Using farce, burlesque and satire, Wilder explores themes of tenacity and resilience, as well as the moral failings of our species. The playwright, who five years earlier had famously broken the so-called “fourth wall” between actors and audience in his classic Our Town, boldly dispensed with the prevailing realism among playwrights of the time in Skin of Our Teeth, an epic romp that spans from the dawn of the Ice Age to the not-so-distant future. He picked up a third Pulitzer Prize for the play.

Marking the close of its 2012-2013 season, BU’s College of Fine Arts is presenting the play through May 10 on the Boston University Theatre mainstage, under the direction of Sidney Friedman, a CFA adjunct professor of dramatic literature and directing.

“The play is about survival,” says Friedman. “God-awful things happen and we suffer, pick ourselves up, and go on.” The title is from a phrase in the Old Testament Book of Job, a catalogue of human suffering: “My bone cleaveth to my skin and to my flesh, and I am escaped with the skin of my teeth.”

The three-act play’s events swirl around the Antrobus family, their name a play on anthropos, the Greek word for man. “They are the family of man,” says Friedman. At the start of the play, Mr. and Mrs. Antrobus—archetypal characters—have been married 5,000 years. They are the parents of Henry, who in one of Wilder’s more heavy-handed references was formerly named Cain, and Gladys. The name of the family’s maid, Lily Sabina, is a composite of the demonic Old Testament Lilith and the terrorized ancient Roman Sabines. Oscar-winning actor Fredric March played Mr. Antrobus and a very young Montgomery Clift son Henry when the play opened on Broadway, but it was Tallulah Bankhead as Sabina who is most indelibly associated with the original production.

Wilder’s mischief goes far beyond his loaded use of proper nouns. As the play opens, the Antrobus family is joined in its 20th-century living room by a pet dinosaur and a woolly mammoth, as an ice age threatens extinction. This fanciful arrangement sets the tone for later scenes, among them Atlantic City near the time of the Great Flood (with strong parallels to the biblical story of Noah) and the postapocalyptic cinders of an epic war in act three. Although keeping true to the original in most ways, the director has relocated the Antrobuses from suburban New Jersey to suburban Massachusetts and woven in a BU subplot. “The play seems like it’s all happening in our vicinity,” says Friedman, who is directing a cast of 19 undergraduates and one graduate student. It’s a complicated play to stage, he says, involving 60 costumes and extensive sound cues, including simulated newsreels and television shows.

“The play is structured as three one-act plays, none of which resolve,” he says, noting that it is far more accessible to contemporary audiences than it was to theatergoers during World War II, who were puzzled by its metatheatrical bent. The Skin of Our Teeth doesn’t just break the fourth wall—it topples it audaciously, with actors periodically breaking character to grouse about the script in a play-within-a-play.

“The Skin of Our Teeth is a multilevel piece,” says Sarah Lowe, (CFA’15), the production’s dramaturge. “This is a story that exists over years, lives, and aeons, and we are only able to see fragments of it. The play is simultaneously three vignettes and one play, about a family, and about mankind.”

The Skin of Our Teeth cast includes Lorne Batman (CFA’13) as Mrs. Antrobus, Eliza Fichter (CFA’13) as Sabina, and Sam Tilles (CFA’13) as Henry. Mr. Antrobus is played by Elliot Norton award and IRNE award winner Hampton Fluker (CFA’13), seen most recently in CFA’s production of Athol Fugard’s Blood Knot, and profiled last February in the “Arts” section of the Boston Globe and the cover story in this week’s Boston Globe magazine section.

The Skin of Our Teeth concludes the season’s CFA keyword initiative: resilience.

The Skin of Our Teeth runs through May 10 at the BU Theatre, 264 Huntington Ave., Boston. Performances are Tuesday, May 7, at 7:30 p.m., Wednesday, May 8, at 7:30 p.m., Thursday, May 9, at 7:30 p.m., and Friday, May 10, at 8 p.m.; there is no performance Monday, May 6. Tickets are $12 for the general public, $10 for BU alumni, WGBH members, Huntington Theatre Company subscribers, students, senior citizens, and groups of 10 or more; members of the BU community can receive one free ticket with BU ID at the door on the day of the performance, subject to availability. Buy tickets here or call 617-933-8600. By public transportation, take the MBTA Green Line E trolley to Symphony or the Orange Line to Massachusetts Avenue.

Skin of Our Teeth Illuminates Man’s Resilience
0
share this