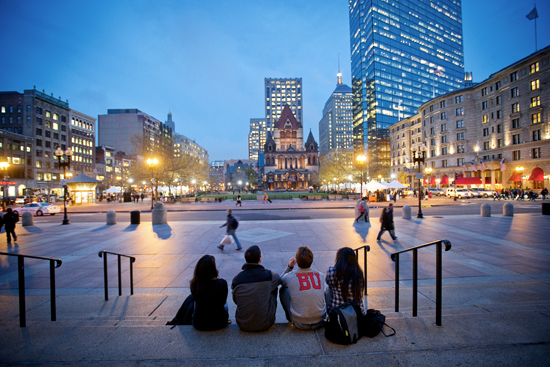 BU Today may be going dark for two weeks, but the city has plenty of events to brighten the final days of summer. Photo by Cydney Scott

We don’t know where the summer’s gone. The days are already noticeably shorter, and we spotted a maple tree already turning color on Comm Ave. Before the new semester begins, BU Today is taking a two-week break. We’ll be busy preparing stories for our return, on Monday, August 26. We’ll have all the information you need about Move-in and FYSOP, and other back-to-school news.

Even though we’ll be dark, Boston has plenty to offer over the next couple of weeks. Below is a list of events guaranteed to add some fun and flavor to what’s left of summer.

Every Friday night through August 23, the Hatch Shell morphs into an outdoor movie theater. Now in its 28th year, Free Friday Flicks, presented by WBZ NewsRadio 1030AM and the Massachusetts Department of Conservation and Recreation, screens popular, family-friendly films for free. The films begin at sundown, offering viewers two spectacular shows: the movie itself and a breathtaking sunset. So grab a friend, a blanket, and a picnic basket and head to the banks of the Charles River. The schedule is as follows: Rise of the Guardians, August 9; Jack the Giant Slayer, August 16; and Oz the Great & Powerful, August 23. Remember that sunsets occur earlier each week, so times will change.

By public transportation, take an MBTA Green Line trolley to Arlington station. Walk along the Public Garden on Arlington Street to Beacon Street. Cross over Beacon Street and take the Arthur Fiedler Footbridge over Storrow Drive to the Hatch Shell, about a 10-minute walk.

Concerts in the Courtyard

What better way to spend a summer evening than listening to great music under a starry sky? The Museum of Fine Arts Elaine and Jerome Rosenfeld Concerts in the Courtyard music series offers a chance to enjoy quality music, drinks, and dancing in the MFA’s beautiful Calderwood Courtyard. Concerts do sell out, so snag a ticket before they’re gone. The remaining concerts: C. J. Chenier on August 14 (sold out—check back on the day of the show; limited tickets are usually released starting at 2 p.m.); Julian Lage and Chris Eldridge on August 15; La Santa Cecilia on August 21; and Juanito Pascual and Friends on August 28.

All shows in the Concerts in the Courtyard series begin at 7:30 p.m. in the Calderwood Courtyard at the Museum of Fine Arts, 465 Huntington Ave., Boston. Tickets are $30, $24 for MFA members. The courtyard opens at 6 p.m. and seating is limited, so bring a low lawn chair or a blanket. In the case of inclement weather, the show will be moved indoors to Remis Auditorium. Tickets can be purchased here. By public transportation, take an MBTA Green Line E trolley or #39 bus to the Museum of Fine Arts stop or the Orange Line train or bus routes 8, 47, or CT2 to the Ruggles stop.

Perhaps the trippiest exhibition ever mounted by the Museum of Fine Arts, Hippie Chic is a vibrant celebration of ’60s and ’70s counterculture fashion. Learn how the generation that embraced love, sex, and rock and roll also revolutionized fashion, from halo headbands and Indian prints to bell-bottoms and star-frame glasses. Featuring 54 eclectic ensembles from designers like Betsey Johnson and Ossie Clark, a vintage jukebox playing ’60s and ’70s hits, and plenty of fringe, this exhibition is way outta sight.

Hippie Chic is on view at the Museum of Fine Arts, 465 Huntington Ave., Boston, through November 11. The museum is open Monday, Tuesday, Saturday, and Sunday from 10 a.m. to 4:45 p.m., Wednesday to Friday from 10 a.m. to 9:45 p.m. Admission is free with BU ID and $25 for adults. By public transportation, take an MBTA Green Line E trolley or #39 bus to the Museum of Fine Arts stop or the Orange Line train or bus routes 8, 47, or CT2 to the Ruggles stop.

From August 15 to 18, the North End holds its annual Fisherman’s Feast street festival. The festival dates back to 1300, when an Augustinian monk is said to have had a vision of the Blessed Virgin Mary, who told him she would help the people of Sciacca, Sicily. In 1503, a huge statue of the Madonna was carried by sea from Palermo to Sciacca. Ever since, the festival has been associated with fishermen. Boston’s version begins with a blessing of the harbor and ends with a procession of the statue of the Madonna del Soccorso through the narrow streets of the North End and features lots of great Italian cuisine by local restaurants and bakeries. It’s become one of the city’s most popular summer events, attracting more than 100,00 visitors each year. Find a detailed schedule of events and vendors here.

Add some green to your summer by heading to City Hall Plaza between August 15 and 17 for the annual Boston GreenFest. Organized by the Foundation for a Green Future, Inc., Boston GreenFest is the region’s largest multicultural environmental festival. The event kicks off on Thursday, August 15, with a concert, eco-friendly world cuisines, and an EcoBazaar. Other events and attractions during the weekend festivities include an EcoFashion shop, an EcoGallery, a Green Film Fest, performances on the GreenSouleStage, big inflatables in the EcoKids’ section, and a Movement Festival on the plaza offering free dance and movement classes.

To get to City Hall Plaza, take an MBTA Green Line trolley to Government Center. Find a complete schedule of events here.

Soak up the final rays of summer with your feet in the sand and sunblock on your face. There are plenty of free beaches and pools in the Boston area, and many are only a T or bus ride away. Find a list of MBTA-accessible beaches here and a list of free public pools here.

In 1947, a goatherd wandered into a hidden cave about a mile inland from the Dead Sea in Israel and discovered a collection of scrolls that had not been seen in 2,000 years. These ancient scrolls, containing literary writings of the time and the oldest known texts of the Bible, are now on view at the Museum of Science—some having never before been displayed in North America. The exhibition, Dead Sea Scrolls: Life in Ancient Times, offers a once-in-a-lifetime opportunity to see one of the most crucial archaeological finds of the last century. In addition to the scrolls, the show includes one of the most comprehensive collections of antiquities from Israel ever organized, including a three-ton stone from Jerusalem’s Western Wall and ossuaries from the early Roman period.

Dead Sea Scrolls: Life in Ancient Times is on view at the Museum of Science, One Science Park, Boston, through October 20. The museum is open daily from 9 a.m. to 7 p.m. (9 p.m. on Friday). Tickets can be purchased here. To get to the museum, take a Lechmere-bound MBTA Green Line E trolley to Science Park Station. The museum is diagonally across the street (O’Brien Highway) just over the Charles River Dam drawbridge.

August brings an opportunity to dine on some of the city’s tastiest food at some of its premier restaurants at an unbeatable price. Boston Restaurant Week takes place this year from August 18 to 23 and August 25 to 30, featuring hundreds of participating Boston-area restaurants offering fixed-price meals at substantial savings. A two-course lunch is $15.13, a three-course lunch is $20.13, and a three-course dinner is $38.13 (prices are per person and do not include beverages, tax, and gratuities). Among the popular restaurants taking part are Eastern Standard in Kenmore Square, the Chart House at Long Wharf, Elephant Walk in South Campus, Top of the Hub at the Prudential Center, and the Beehive in the South End. A complete list of participating restaurants is here.

Another of the North End’s annual summer celebrations is Saint Anthony’s Feast, the largest religious festival in New England, held from August 23 to 25. Begun in 1919 by Italian immigrants from the town of Montefacione, the feast honors Saint Anthony of Padua and Saint Lucy and is celebrated each year on the last weekend of August. This lively festival includes an open air mass, live entertainment, cooking demonstrations, food from more than 100 pushcarts, and a 10-hour procession of the statue of Saint Anthony through the streets of the North End. See the full schedule of events here.

See You in Two Weeks

There is 1 comment on See You in Two Weeks