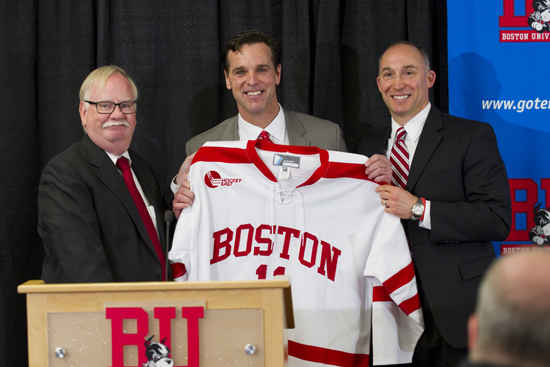 President Robert A. Brown (left) and Mike Lynch, assistant VP and director of athletics, present a jersey to newly appointed men’s hockey head coach David Quinn (CAS’89). Quinn comes back to BU from the Colorado Avalanche, where he has been an assistant coach. Photo by Cydney Scott

Boston University has hired alum David Quinn, a former associate head coach at BU and most recently assistant coach of the Colorado Avalanche, to replace men’s ice hockey coach Jack Parker (SMG’68, Hon.’97), who announced his retirement in March after 40 years at the helm. As associate head coach at BU from 2004 to 2009, Quinn (CAS’89) helped lead the team to the NCAA national title in 2009. He takes over his new post when Colorado’s season ends.

Michael Lynch, a vice president and director of athletics, said Quinn is the ideal candidate for the job. “His résumé is filled with diverse experiences at both the college and pro level,” said Lynch. “He is a proven head coach and a consummate professional. He is also a BU man, an important consideration as we deliberated. I’m absolutely convinced that David will use the foundation laid by Coach Parker as a launching pad to take our program to great new heights.”

Speaking at a news conference, Quinn thanked President Robert A. Brown and Lynch for the opportunity to lead the BU team. “I couldn’t believe how excited I was when this job came up,” he said. “The last four years I’ve missed the college hockey experience.

“I want to continue the legacy that Jack built here,” he said. “I’m humbled, honored, and excited, and I wish tomorrow was October 1 and it was our first practice.”

Brown described the search for a new coach as “a wonderful challenge, because we had such enormous shoes to fill.” He said Quinn has coached at “every level of the sport…and he has the ability, the experience, and the values to lead this program.”

Quinn left his coaching job at BU in June 2009 to become head coach of the Lake Erie Monsters of the American Hockey League, the AHL affiliate of the Colorado Avalanche of the National Hockey League. He was named assistant coach of the Avalanche last June.

Playing for BU in the 1980s, Quinn was named an All-Hockey East and All-New England defenseman, and in his senior year, he was cocaptain of the team. He was a member of the US National Junior Team that captured the bronze medal at the 1986 International Ice Hockey Federation World Junior Championship, and he was the 13th player selected in the 1984 NHL entry draft, when the Minnesota North Stars made him their first-round selection.

After being diagnosed with the blood disorder hemophilia B, also called Christmas disease, Quinn chose to coach rather than play. He signed on as assistant coach at Northeastern and later at the University of Nebraska Omaha. Working also as head coach of the US National Under-17 Team, Quinn established himself as one of the top young coaches in the country.

In 2002–2003, he guided the Under-17 Team to a 6-4-1 record in international competition, including a second-place finish at the Four Nations Cup in Switzerland and a first-place victory at the Compuware Four Nations Tournament in Ann Arbor, Mich. He also was an assistant coach for the US National Under-18 Team, which advanced to the International Ice Hockey Federation Under-18 World Championship in April 2003, finishing fourth. In 2003, he was named USA Hockey Developmental Coach of the Year and was nominated for the United States Olympic Committee Developmental Coach of the Year. In 2007, he was an assistant coach for the US National Team at the World Championships in Russia.

Tickets for the 2013-2014 men’s hockey season are on sale now. Click here to learn more about BU Faculty & Staff discounts.

There are 6 comments on New Hockey Coach Welcomed Home