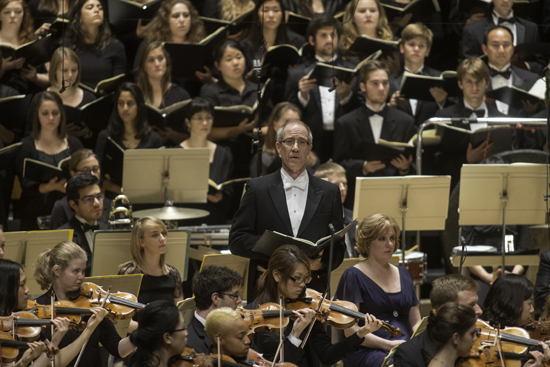 In a tribute to the American spirit, the BU Symphony Orchestra and Symphonic Chorus concert tonight at Boston Symphony Hall will feature baritone soloist James Demler (above) in Paul Hindemith’s When Lilacs Last in the Dooryard Bloom’d (A Requiem for those we love). Photo by Michael J. Lutch

Commissioned in the wake of President Franklin D. Roosevelt’s death, composer Paul Hindemith’s 1946 work When Lilacs Last in the Dooryard Bloom’d (A Requiem for those we love) was based on the poem of the same title by the consummate American poet Walt Whitman. In setting to music Whitman’s poignant elegy for slain President Abraham Lincoln, the German-born Hindemith created what critics hailed as a profoundly American work. The BU Symphony Orchestra and Symphonic Chorus will perform the work tonight at Boston Symphony Hall, along with Charles Ives’ haunting Decoration Day, in the second of the College of Fine Arts two annual performances at the famed concert hall.

A stirring memorial to Roosevelt, who had worked tirelessly to ensure Allied victory in World War II, the composition was a labor of love for Hindemith. The composer had fled his native country in 1938 after the Nazi party condemned his modernist compositions as “degenerate.” Requiem was commissioned by conductor Robert Shaw (Hon.’94) just after FDR’s death in April 1945 and premiered a year later, with Shaw conducting.

In Requiem, Hindemith compressed Whitman’s 16-stanza poem into 11 movements for full symphonic chorus and orchestra, with the poet’s voice sung by a solo baritone. “Many years ago my mother told me the story of how she just broke down and wept as a young girl when FDR died,” says James Demler, a CFA assistant professor of music, who will sing the baritone solo. “When Hindemith was asked to write this music, it was with both Lincoln and Roosevelt in mind, and it was about how the nation was so deeply affected by those deaths. I’ll try not to lose sight of that when in performance.” Demler’s arias, some very complex, will be interwoven with that of mezzo-soprano Penelope Bitzas, a CFA associate professor of music, in the role of a thrush. In the poem Whitman implores the bird to “sing on, sing on” what he calls “death’s outlet song of life.”

“There’s a kind of nobility and melancholy within the text,” says David Hoose, a College of Fine Arts professor of music and orchestral conducting and director of orchestral activities, who will conduct the concert. “Throughout his Requiem, Hindemith, who died in 1963, captured the spirit that America aspired to at the time, and still aspires to today,” a “heartiness and sturdiness” that is reflected in Whitman’s poetry.

Compared with Hindemith, Charles Ives is an “impractical, often disorganized” composer, says Hoose. Ives’ Decoration Day, the second movement in A Symphony: New England Holidays, refers to the day in late spring when mourners would lay flowers on the graves of the Civil War dead. The holiday, Ives observed in his notes on Holidays Symphony, “is a day, as Thoreau suggests, when there is a pervading consciousness of ‘Nature’s kinship with the lower order-man.’” The movement concludes with a trumpet faintly sounding “Taps” as if from a great distance.

An American modernist who composed most of his work between 1900 and 1920, Ives grew up in Danbury, Conn., and died in 1954. His father was the town bandmaster and had served in the Union Army. Ives drew inspiration from church hymns and traditional and patriotic songs, reinterpreting these familiar tunes in experimental compositions that were boldly polyrhythmic and polytonal. Best known today for his chamber work The Unanswered Question and for his symphonies, the innovative Ives saw little of his work performed during his lifetime. In pairing Ives and Hindemith, Hoose says, he’s “enjoyed this rare opportunity to find a connection between the two composers.”

Rounding out the program will be the premiere of Hoose’s arrangement of the traditional hymn “For Those We Love Within the Veil,” a hymn Hindemith weaves and reharmonizes in his Requiem. It was thought for many years to be a wordless hymn, but in 1997 musicologist Kim Kowalke discovered “For Those We Love” in a hymnal at Christ Church in New Haven, Conn., dating from the years Hindemith taught at Yale University, 1940 to 1953. But in the Requiem, Hoose says, “the very beautiful words of the hymn, which remember the dead of World War I, are never sung.”

The Boston University Symphony Orchestra and Symphonic Chorus concert O Ever Returning Spring! is tonight, Tuesday, April 9, at 8 p.m., at Symphony Hall, 301 Massachusetts Ave., Boston. Tickets are $25 for general admission; student rush tickets are $10, available at the door today from 10 a.m. to 6 p.m. Members of the BU community may receive one free ticket at the door on the day of the performance. Purchase tickets here or call 617-262-1200.

Tonight’s concert, titled O Ever Returning Spring! will be webcast live on the School of Music website and will be rebroadcast on the Virtual Concert Hall.